Even though it’s still slow and doesn’t seem to be amounting to much, Lodge 49 was a little more engaging in “Moments of Truth in Service” thanks to focusing more on characters other than Dud.

Even though it’s still slow and doesn’t seem to be amounting to much, Lodge 49 was a little more engaging in “Moments of Truth in Service” thanks to focusing more on characters other than Dud.

I don’t know what it is about Dud (Wyatt Russell), but the more I learn about him, the less sorry I feel for him. Maybe it’s just me. But I think we’ve all, at one point or another, been bitten by a snake and lost our job. We don’t all use unemployment as an excuse to get drunk and dive into the swimming pool of our family homes, screaming and terrifying children. “Moments of Truth in Service” opens with Dud in court, apologising for that, to both the judge and the family who live there now, whose kid he frightened. Dud’s so uselessly laidback that he never comes across as remotely sincere. And because he’s insincere, so is Lodge 49.

That isn’t to say the show has all that much on its mind, but it certainly has a thought or two about America’s fluctuating job climate, not that either are worth paying much attention to. That’s what you get, I suppose, when you build a show around an idle moron like Dud. 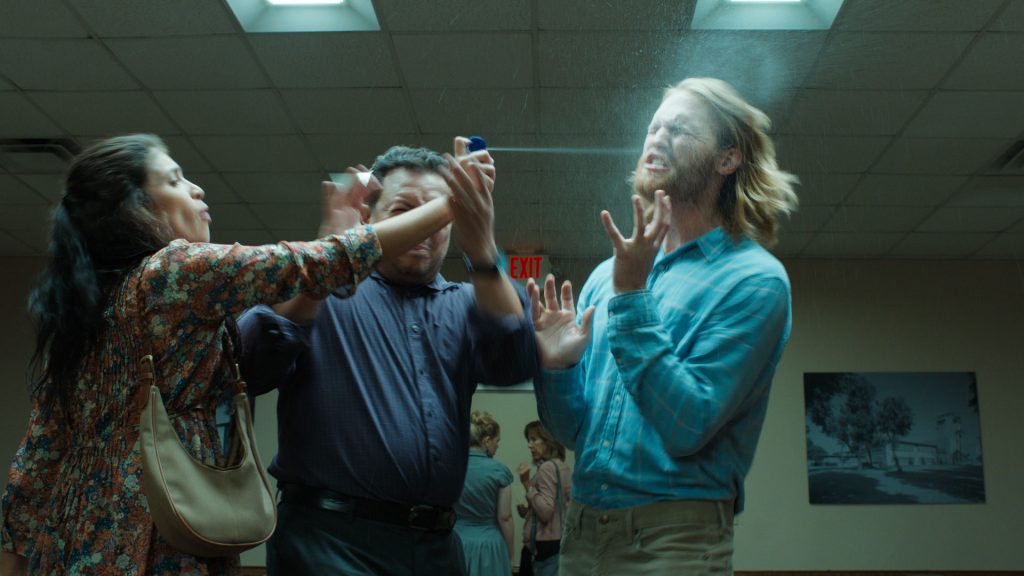 Luckily Liz (Sonya Cassidy) is given much more to do in “Moments of Truth in Service” – the episode title even refers to her thankless waitressing job at Shamrock’s, a kind of Irish-themed Hooters-style bar. She’s taking the free mugs from the loan office and avocados from work as she toils to pay off her late father’s debts; she’s a much better mouthpiece for Lodge 49’s ideas that Dud, at the very least. But she’s also immensely likeable, which is something I can say about a lot of the supporting cast here, most especially Ernie (Brent Jennings), the aging plumber who has taken Dud under his wing both at work and at the lodge.

With Larry Loomis (Kenneth Walsh) still hospitalised, stewardship of the lodge is about the land in Ernie’s lap, and “Moments of Truth in Service” hints at a deeper, weirder background to the Order of the Lynx that is yet to be properly explained. The order’s philosophical and alchemical dabbling doesn’t exactly have me eagerly anticipating the next episode, but you can admire Lodge 49’s earnest attempts at carving out its own niche. Hopefully it’ll end up worth the effort.