Who Is America? Episode 5 proved to be lacklustre once again, picking easy targets and still failing to get much out of them.

Who Is America? Episode 5 proved to be lacklustre once again, picking easy targets and still failing to get much out of them.

Sometimes, and it seems increasingly often, Sacha Baron Cohen’s Who Is America? just doesn’t work. The characters are wrong or the targets are wrong. Occasionally, both are. The outlandish probing fails to provoke anything silly or disturbing enough to justify the effort. And when those moments fail to materialise, Baron Cohen is falling back on easy gags or deliberately unclear language just to force a bite. Who Is America? Episode 5 was the worst offender by far in this regard, really only managing to amuse in the final segment, and even then only by leaning yet again against the perplexing willingness of far-right Republicans to do absolutely anything a seemingly macho man tells them to.

We’ll get to that. In the meantime, let’s just run through the lesser sketches for the sake of completeness. Cohen’s Finnish YouTuber, OMGWhizzBoyOMG!, made another appearance, this time opposite former Milwaukee sheriff David Clarke, who just wouldn’t play along, even when asked if his fingers “smelled like box”. It’s always disappointing when Cohen targets someone well-known for saying ridiculously inflammatory things and doesn’t manage to get anything out of them; the YouTube unboxing character simply doesn’t work, too culturally and generationally removed from men who wear cowboy hats to fool them into doing anything of significance.

Billy Wayne Ruddick, Jr. doesn’t work either, presumably because Alex Jones already has the insane right-wing conspiracy-theorist demographic sewn up. He had the highest-profile guest in Who Is America? Episode 5, in Donald Trump’s former campaign manager Corey Lewandowski, who quite willingly proved he was a despicable person when he made a “womp womp” noise in response to a child with Down’s syndrome having been wrenched from the arms of her parents at the U.S.-Mexico border. But Lewandowski is a lobbyist. He spent months on the campaign trail, presumably dealing with people exactly like Billy Wayne Ruddick, which puts the character in a useless position. Liberals know he’s ridiculous, and Republicans are used to him. It doesn’t make for good television either way. 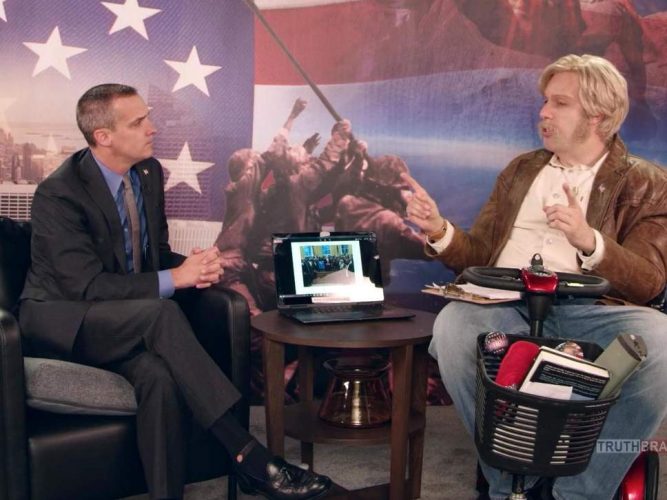 When Who Is America? Episode 5 veered away from politics, it was funnier but, as usual, less incisive. Ex-con Rick Sherman, whose role is to poke fun at the willingness of modern art scenes to embrace nonsensical guff, made his second appearance, this time peddling an EDM track that he had made using recordings in prison. The target was the embarrassingly enthusiastic and ridiculously-named nightclub promoter Jake Inphamous, who seemed to enjoy the music despite it featuring a man being “buggered” and another man being stabbed. Then again this bloke calls himself Jake Inphamous, so it’s probably impossible to mock him anyway.

It’s very easy to mock Mahbod Moghadam, though. The co-founder of Rap Genius is remarkably committed to being a prick, which made him willing fodder for photographer Gio Monaldo, who disappointingly duped him in the exact same way he did reality TV star Corinne Olympios in the second episode, by having him Photoshopped into pictures made to look like he was doing charitable work abroad. It’s still a good gag, but it was better the first time.

Finally, then, we come to the president of Youth Shooters of America, Daniel Roberts. Reliably stewarded by Erran Morad, easily Baron Cohen’s best character in this show, he was put through a series of anti-terrorism drills that included conversing in a very loud voice, trying to disarm a “suicide diaper” before it detonated (he panicked and just threw the baby in the bin), and preventing his own beheading by chomping down on a strap-on d***o like a dog gobbling a sausage. Based on the rest of Who Is America? Episode 5, there’s a case to be made for an entire series revolving around the ex-Mossad anti-terror specialist, but it doesn’t seem likely. There’s no shortage of people who are all-too-willing to have their silly beliefs reinforced, but it seems there’s a limit on how many creative ways one man can think of to do it.