In episode 6 “Filter”, the late Reverend Dever has been laid to rest again, with only his adopted son Henry (André Holland) and a minister to bear witness. As the minister reads the ominous sounding 1 Corinthians 15 (BVW alert!), Henry’s auditory disturbances return. Elsewhere, his wife Ruth (Sissy Spacek) struggles with the frailty of time while Alan (Scott Glenn) makes a deal with the possible devil (Bill Skarsgård) to save her soul.

The Kid (Bill Skarsgård) actually speaks more in “Filter”,  as he gives Alan instructions to retrieve the dead warden’s car. He is intentionally vague as to why. While Alan is out and about, holding a tow truck guy at gunpoint for the chance to save Ruth, the Kid suits up in a literal dead man’s suit. What I find fascinating about the Kid in the past two episodes is how they play with space and proportion in his scenes. When standing next to other characters, which is rare, he towers over them. Yet we then see him folded into small spaces or dwarfed by the oversized suit shoulders. Perhaps this is just a visual element meant to unsettle the viewer; perhaps there is a greater meaning behind it. This entire section shows the Kid dabbling in Reverend Dever’s life, culminating in him watching videos of Henry as a child.

This bizarre game of dress-up is short-lived as Henry takes the Kid to Juniper Hill Psychiatric hospital. Meanwhile, Henry’s son Wendall (Chosen Jacobs) has come to stay, giving the writers a chance for a bit of exposition and reflection. Probably the most important information is how Ruth’s memory works and why she is so often holding chess pieces. She uses them as breadcrumbs to keep her tethered to reality, one in every room of the house for when her mind wanders.

All this reminiscing with his son gives Henry flashbacks on his time in the woods with his father. These flashbacks lead him to talk once again with Molly (Melanie Lynskey). She confesses as we knew she eventually would, to killing his father because young Henry hated him so much. Even more, she notes that she was channelling Henry when she fatefully yanked that tube. Henry dismisses her, fleeing; this truth is too much to take. It also probably doesn’t help that he has been seeing two strange men watching him from a distance. Being that this is Castle Rock, we have no idea if they are real, at least until Henry approaches them in the woods. 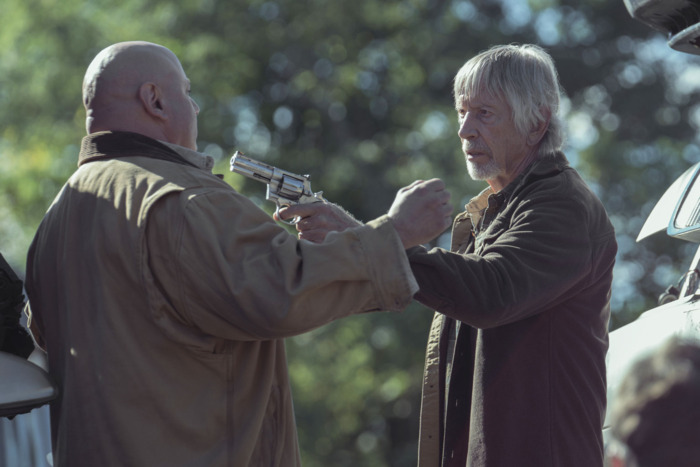 Here’s the big reveal as provided by the strangers, Odin Branch (an exceptional C.J. Jones) and his interpreter, Willie (Rory Culkin). Henry has something called schisma, which his father termed The Voice of God. Essentially, Henry (and his father) can hear the universe, although Odin gives a more scientific explanation. The sound, Odin observes, is getting louder. Last time this happened, Reverend Dever designed a device, the Filter, which Odin has now constructed. Its purpose (in the back of Odin’s RV) is to provide total silence to filter out everything but the schisma so that people can hear the Truth. Sounds like a great idea until you learn that Odin made himself deaf in the Filter. Henry ends the episode locked inside the Filter against his will, balled up in pain, with his father asking (as he did in the woods years before), “Do you hear it now?”

Finally, the Kid has escaped from Juniper Hill to wait for Alan on his front porch. He scorns the ex-sheriff for leaving him in Warden Lacy’s trunk so many years ago as it cuts to a close-up of his bloodied hand. The cure for Ruth, it’s implied, is all a sham. The Kid has come to punish Alan in the worst possible way. Inside, the house is destroyed and marked with bloody handprints, but no Ruth in sight. Maybe the Warden really should have left that kid in the box.

As much as it seems we learn in “Filter”, there is so much more to unveil in the next few episodes before the season ends. Early critics of the show noted issues with the pace. I actually think those slower early episodes now work in its favour, as the narrative escalates the tension for the characters. One misfire I often see with mysteries is setting an early pace that is difficult to maintain. Here we see a greater build. The aesthetic of the show has also become more defined as the season has progressed. For example, I never thought my college egg crate could be moulded into something terrifying.

A final note regarding the BVW: 1 Corinthians 15:54 uses the key line (restated by Wendall) ”Death is swallowed up in victory.” This itself is quoting from Isaiah 25:8. The passage personifies death, having it consume mankind for generations, only to be itself consumed by God. Could the Kid be death and Henry, hearer of the Voice of God, be tasked to consume him?