A compelling navigation of the deteriorating mind, “The Queen” showcases mind-bending narrative and a brilliant performance by Sissy Spacek.

A compelling navigation of the deteriorating mind, “The Queen” showcases mind-bending narrative and a brilliant performance by Sissy Spacek.

Just a few short weeks ago, I wished that Sissy Spacek be given a character-driven episode like “Local Color.” In this case, I got both what I wanted and needed. This week’s Castle Rock, “The Queen”, delves into Ruth’s world, allowing Spacek to tug at the unravelling threads that weave together her character. It is an outstanding triumph of storytelling, driven by Spacek’s incredible performance.

“The Queen” traces Ruth’s experiences throughout the season, from her reason for having Alan dig up the neighbourhood stray to her meeting with the doctor. The latter uses sound, close up, and out of sync soundtrack to demonstrate Ruth’s fractured world. We see her use her chess set, a gift from Alan (Scott Glenn), to tether her memories to reality, room by room. Here Ruth is shown as a spectator in her own memories, someone shifting through her life, looking at the few moments that still remain clear. Somewhat reminiscent of Eternal Sunshine of the Spotless Mind, the sequence is disorienting, making it unclear when Ruth is at any given moment. Unlike a similar concept used in WestWorld, it is not so much for the audience to guess time, but Ruth herself. Perhaps the most interesting choice in the memories is that Spacek almost always plays Ruth, while younger versions of the other characters appear.

Not all the scenes are familiar. One includes the late Reverend Matthew Deaver (Adam Rothenberg) leading Ruth and young Henry into the woods where he discusses his thoughts of suicide and alludes to the schisma we learned about last week. Or the return of a brain tumour. It’s unclear which. “The Queen” reveals many dark truths about the beloved Reverend, including his poisoning of Henry’s childhood dog. No wonder his adopted son wasn’t a fan. 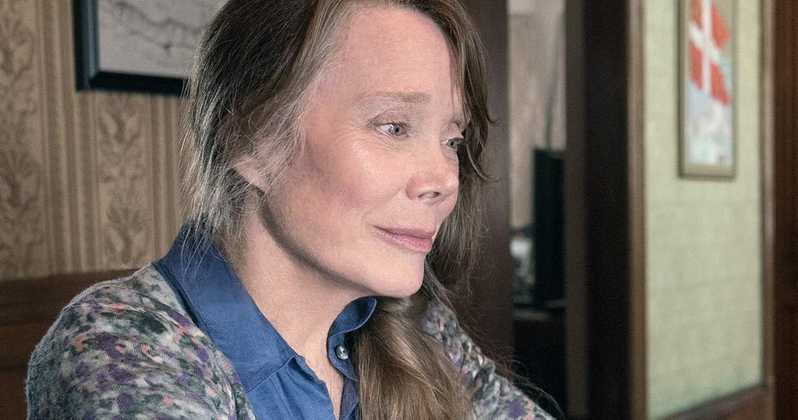 In the present, Ruth is tossing away her medications to “stay sharp,” after talking about video games with her grandson Wendell (Chosen Jacobs) when the back door opens. The Reverend enters in her memory, though in reality, it is the Kid (Bill Skarsgård). On the television, Juniper Hill, where the Kid was committed, is in flames. Molly’s (Melanie Lynskey) “You in danger girl” warning comes too little too late. Lost in her own mind, Ruth believes that her dead husband has returned. Ruth sends Wendall away to safety. Her interactions with the Kid are strangely intimate–he makes her eggs, entices her to take her medications, draws her a bath–a cross between doting partner and loyal son. His intentions are unclear and certainly disconcerting enough for Ruth to stab him with a kitchen knife (it is his blood all over the walls downstairs).

The great tragedy of “The Queen” is the doomed romance of Alan and Ruth. The young sheriff begs Ruth to leave her husband for him. Older Alan teaches her magic tricks in bed. Alan’s devotion to her has been evident from the first episode, making his fatal wounding at her hand all the more devastating. In the end, the good sheriff lost her just as he feared he would, to the illness that destroyed her mind. Except she is the one begging him not to leave her. These final moments between Glenn and Spacek are gut-wrenching.

One of many of the great injustices of the Oscars was Sissy Spacek not receiving a statue for her work in Carrie. As soft-spoken Carrie, Spacek tells a world with her eyes, from timid and hopeful to wild and vengeful. Likewise, her work in “The Queen” is stellar. The expression on her face as she slow dances with the Kid is raw with terror, her eyes explosions of fear. Even without the rest of the season, this episode stands on its own as a truly inspired piece of television.