Olivia Cooke excels in ITV’s new period drama Vanity Fair, but her considerable charm is about the only thing that the show has going for it.

Olivia Cooke excels in ITV’s new period drama Vanity Fair, but her considerable charm is about the only thing that the show has going for it.

You can’t idly channel-flip through British TV without stumbling on at least one lush period drama, and ITV’s latest is yet another adaptation of William Makepeace Thackeray’s 1848 novel Vanity Fair. Reimagining the famed protagonist of Becky Sharp as the alluring Olivia Cooke, still riding high on her successes in Ready Player One and Thoroughbreds, this version of the story, courtesy of the folks behind Poldark and Victoria, is the comic tale of a charming young woman rising above her lowborn station.

It’s the usual narrative, but softened, with Becky less cold and bitter. She’s still manipulative, but given how frequently she spares a glance straight down the camera, she’s in on the joke this time. We’re rooting for her and against the stuffy, archaic values of Regency Britain, which employs people of colour as servants and ships women off to gloomy country estates to work as governesses.

In Vanity Fair Episode 1, Becky tries to avoid that fate by seducing the tubby, idiot brother of her well-to-do best friend, Amelia Sedley (Claudia Jessie). This is after fleeing the employ of a prim schoolmarm, Miss Pinkerton (Suranne Jones), who could have done with more screen time. There’s the usual overabundance of giggling girls in bonnets and narcissistic soldiers who strut around in full regalia, and an extended night out in Vauxhall Pleasure Gardens complete with a hot air balloon and a firework display more than gets the point across. 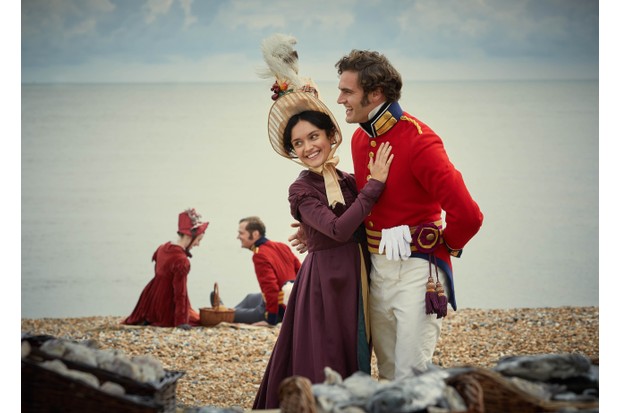 But for all the prim-and-proper period detail, there’s a layer of irony and twenty-first century social consciousness that I’m not sure works here. The gags are silly, the put-downs are obvious, and the most distasteful stuff is tempered with a knowing “sorry about all this!” sensibility that feels like a pitiable concession to the easily offended. It all culminates in a ridiculous scene in Vanity Fair Episode 1 in which Amelia’s father said some casually racist stuff in front of his black manservant, who made a meal out of a confused double-take, as though he was totally taken aback by such an attitude.

The setup for the second episode looks a little better, at least, with Becky arriving at a foggy Gothic pile where Martin Clunes is schlepping around as the leering Sir Pitt Crawley, whose mangy dog is “partial to a young lady.” He sounds like fun. But Vanity Fair Episode 1 didn’t do much else to encourage enthusiasm, especially not with a dopey, imaginary opening in which Michael Palin addressed the audience as Thackeray himself while Becky clung madly to an enchanted carousel. Round and round we go.