Vanity Fair Episode 2 was a real turnaround, seeing the show really hit its stride and deliver a funny, charming hour of television.

Vanity Fair Episode 2 was a real turnaround, seeing the show really hit its stride and deliver a funny, charming hour of television.

Well, colour me surprised. After enthusiastically taking the p**s out of the first episode of ITV’s modernisation of William Makepeace Thackeray’s classic novel, the last thing I expected was for Vanity Fair Episode 2 to be quite as enjoyable as it was.

The change in setting certainly helped. Shacked up in Sir Pitt Crawley’s (Martin Clunes) Gothic Hampshire home, the ambitious and charming Becky Sharp (Olivia Cooke) looked to improve her lot in whichever way she could. But the comical dysfunction of the Crawley clan made that difficult for her and entertaining for us, which I suppose is as it should be.

Working as the house’s governess, Becky quickly formed relationships with the precocious Crawley children (Orli Goldstein and Niamh Durkin) and Sir Crawley himself, played to a tee by Clunes as a permanently dissatisfied older fellow with none of the sleaze suggested by the opening hour. She also caught the eye of Crawley’s son Rawdon (Tom Bateman), who was unfortunately not quite wealthy enough to satisfy her need for social uplift. 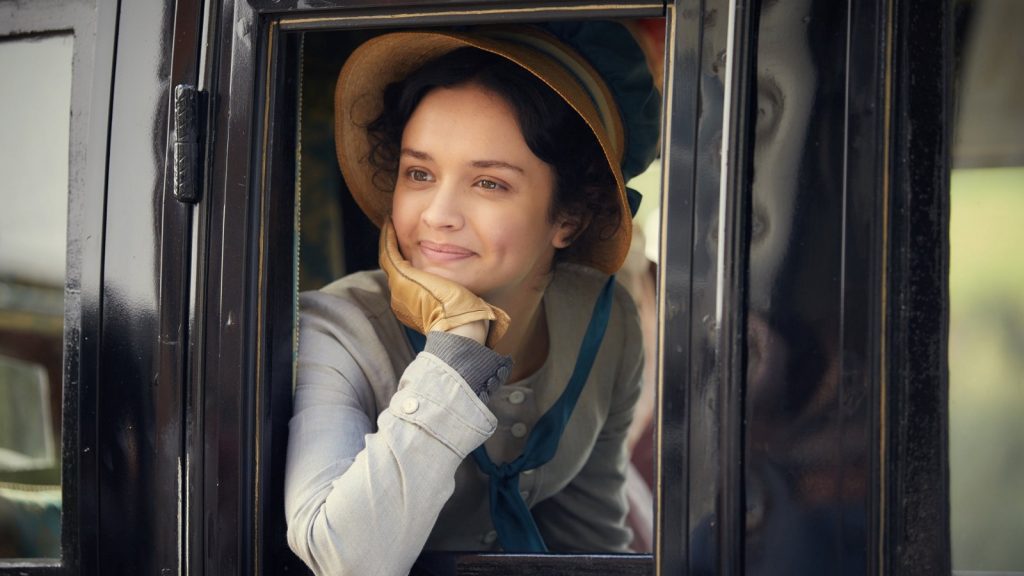 Salvation was delivered in the form of Miss Matilda Crawley (Frances de la Tour), Pitt’s sister, and with her arrival Vanity Fair Episode 2 kicked into a higher gear. There was chemistry and tension as alliances were formed and resentments simmered, and the reimagining of Becky as a subtler, more lovable anti-heroine began to take shape. Her appointment as Pitt’s secretary felt earned, and her eventual employment as Matilda’s nurse even more so; these are the first characters we’ve seen that have approached life in a meritocratic sense, and while the insistence that Matilda considered Becky “an equal” might have been a bit heavy-handed, it nonetheless succeeded in getting the audience onside.

Elsewhere in Vanity Fair Episode 2, things were going poorly for Amelia Sedley (Claudia Jessie), whose marriage to her sweetheart is in a precarious position and who, honestly, I didn’t entirely expect to see again. The idea of Becky moving onwards and upwards with each episode felt like a compelling structure for the show, and I assumed that would entail her leaving her previous allies and acquaintances behind. Apparently not. Amelia’s father is in financial ruin, and his minor breakdown in the street was quite a scene, but the show continues to belong to Cooke, and whenever it strays from her it’s undeniably weaker.

That isn’t to say that the supporting cast didn’t lend an awful lot to Vanity Fair Episode 2, simply that to focus on any of them for too long would likely be a mistake. Cooke’s Becky is captivating, and her journey from lowborn orphan to social climber is, suddenly, a compelling one. It’ll likely be a career-defining role for the young actress, and she deserves as much limelight as she can steal.