Like most people, I didn’t much care for the first season of Marvel and Netflix’s Iron Fist. Unlike most people, I didn’t noisily bleat about the main character being a white man. Here’s the bad news for the folks who did: the main character is still a white man. Then again, he has been since the 1970s, so what can you do? The good news for everyone is that Iron Fist Season 2 is much, much better, in every way that counts.

Having said that, you never know. Writing about these things is always a nightmare. Press, as usual, were provided with the first six episodes, which is never enough to make a decent determination of the show’s quality – not with shows as consistently inconsistent as these. I gave Jessica Jones’s second season a relatively favourable write-up, and then the second half turned out to be terrible. That was awkward. And then Luke Cage got off to an embarrassing start before delivering perhaps the finest string of episodes we’ve yet seen. That was more awkward still. Take this with a pinch of salt, is all I’m saying. You can’t ever tell.

Early signs are certainly promising, though. Danny Rand (Finn Jones) is no longer an insufferably angsty gap-year spiritualist. He’s had a haircut and stopped spouting dopey Chinese aphorisms at any opportunity. The boardroom machinations of the billion-dollar Rand Corporation have been blessedly abandoned; Danny still has useful access to the company’s resources and bottomless trove of wealth should he need it, but he’s currently living contentedly in relative squalor with his girlfriend, Colleen Wing (Jessica Henwick), who gets much more to do this time. She even gets to do some of it alongside Misty Knight (Simone Missick), which, along with Marvel’s upcoming, exclusively digital on-going series, suggests that the Daughters of the Dragon spinoff we all quietly want might not be outside the realm of possibility.

And the fights! Finn Jones’s dweeby demeanour might still be more reminiscent of a 12-year-old girl than the world’s most feared martial artist, but at least the choreography and staging are doing some of the heavy lifting now. It still lacks the bone-crunching tactility and fancy-pants long takes of Daredevil, Marvel’s other pugilistic property, but at the very least it’s better than watching people strike kung-fu poses and idly flail at the air.

Then again, those poses are half the point. A vaguely Eastern undercurrent is really the only thing that gives the show a sense of identity, and where the first season completely lacked a unifying theme and style, Iron Fist Season 2 makes an effort to create one – even if it isn’t entirely successful. And it needs such a thing, if for no better reason than to fit in. Daredevil was about masochistic Irish-Catholic self-penance; Jessica Jones about female empowerment and abuse survival; Luke Cage about African-American cultural reclamation; and The Punisher about post-traumatic stress and veterans affairs. They’re all about the merits of vigilantism versus traditional justice. And they’re all, in one way or another, about New York.

Iron Fist Season 2 is as much about New York as any of them, but it also attempts to expand its horizons. The present-day plot sees Danny and Colleen attempt to broker peace between warring Triads in Chinatown, which lacks the specificity of Daredevil’s Hell’s Kitchen or Luke Cage’s Harlem, but enough of the show’s pitiful budget was spent on authentic storefronts that it mostly gets away with it. But a not-insignificant amount of time is spent in flashback to Danny’s years in the windswept, mystical kingdom of K’un Lun, which increasingly seems like a haven not just for martial training but systematic neglect and abuse.

It makes sense. Danny might technically be from New York, but he’s most intimately tied to another place and culture entirely – and he was an outsider there, too. His blinkered, idealistic vision of a peaceful and inclusive New York City is symptomatic of a life spent not fitting in. And that desperation for acceptance is what allows a place like K’un Lun to flourish; it offers the opportunity to become part of something greater than the individual, but only if you surrender completely to its archaic practices and ideals.

Jessica Jones dealt with abuse, too, but committed by controlling men against pliant women. Iron Fist Season 2 is more concerned with slavish devotion to tradition, to childish notions of destiny and divine mandates. It presents unswerving belief, in a cause or a system, as equally likely to allow for manipulation and trauma as provide any sense of purpose. What’s interesting is that this subtext isn’t best expressed through Danny, in large part because of his status as an outsider, but through his former friend and current rival, Davos (Sacha Dhawan). 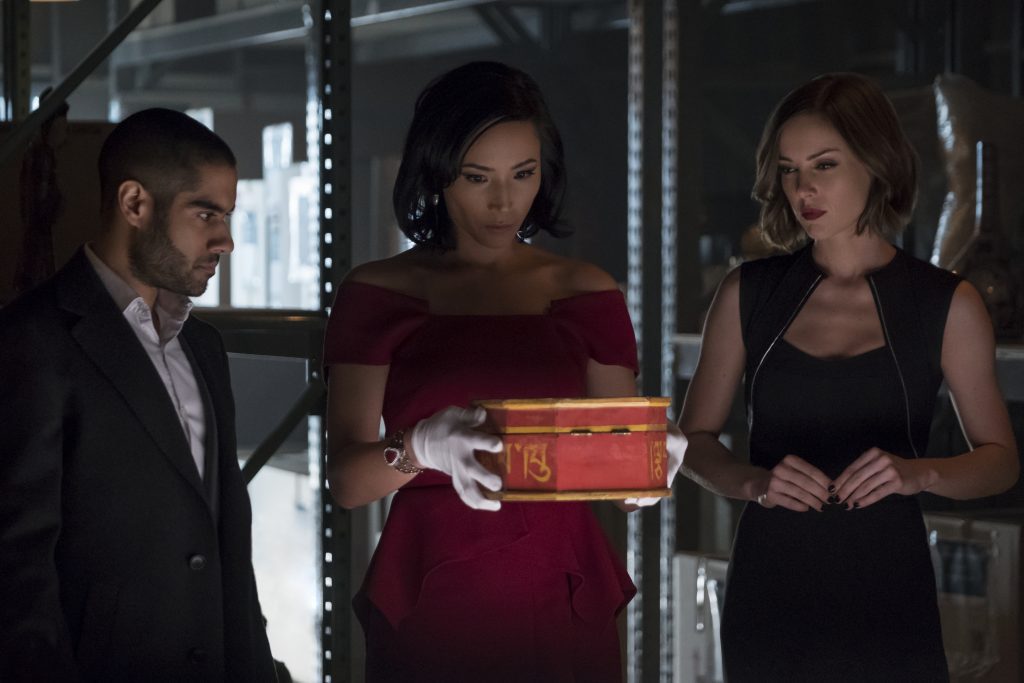 The best of these shows have revolved around their antagonists – Kingpin, Killgrave, Bushmaster. And each of those villains is defined by a legacy of suffering at the hands of arguably worse evils, which is a category that Davos, otherwise known as the Steel Serpent, occupies as well. Only a man in desperate need of some motherly affection would clench his bloodied fists and repeat, “I will make you proud.” To him, the mantle of the Iron Fist is his birthright, stolen from him by someone he considered, at one point, to be a brother. Danny’s success is Davos’s greatest failure, in his own eyes and those of his unfeeling mother. The best scene of Iron Fist Season 2 is a tearful farewell, the screen bisected by a door, Davos and his dear old mum on either side. There’s only an inch between them, but it might as well be miles.

This is good stuff, and if Davos’s diminutive stature and faintly incongruous English accent prevent him from ascending to the teetering heights of the other heroes’ nemeses, the show’s efforts to humanise him are nonetheless appreciated. And he is, after all, Iron Fist’s most iconic rogue; Danny Rand’s corrupted, smoky reflection. He has to be here, even if the show has to become rather contrived to excuse his presence. I’d have preferred him not to become entangled in the revenge schemes of Joy Meachum (Jessica Stroup), which don’t always make sense or work particularly well, but which are also mercifully brief. You can excuse it. Ward Meachum (Tom Pelphrey) also returns, but he’s aimless in these first six episodes, devoting most of his time to recovery from addiction and bonking his sponsor.

Iron Fist Season 2 makes a lot of effort to suture the bleeding pieces of a torn-apart family, but it feels like a metaphor for Marvel attempting to knit together a show that never cohered in the first place. I can appreciate that. This was the steepest, most treacherous hill to climb, and now we’re halfway to the summit, it looks like the expedition might reach their destination after all. What they’ll do once they get there is anyone’s guess. But the view will be a fine thing.