Shooter races towards the third season finale as the heroes are confronted with Atlas’s contingency plan, and the Swagger marriage is on the rocks.

Shooter races towards the third season finale as the heroes are confronted with Atlas’s contingency plan, and the Swagger marriage is on the rocks.

It isn’t easy being Bob Lee Swagger (Ryan Phillippe). After being apprehended by the FBI at the end of last week’s episode, Team Swagger assumed that with the death of Brooks their problems were over. No such luck. Atlas always has a contingency plan, and to make matters worse, in “Patron Saint” Julie (Shantel VanSanten) has decided she’s had quite enough of living her life on the run while her husband plays hero.

She has a point. Leaving Mary (Lexy Kolker) with her aunt, which I’m sure will turn out to be a bad move, she rushed off to Swagger’s D.C. hotel room. There, they had a much-needed chat about putting family first, and while there isn’t much to these two as a unit besides their mutual implausible gorgeousness, this felt like a long overdue heart-to-heart. Unfortunately it was interrupted by Nadine (Cynthia Addai-Robinson), Isaac (Omar Epps) and Harris (Jesse Bradford), who had a new lead to pursue.

Julie sulked about it a little bit, but I’m sure she understands that Bob Lee is in the middle of a crisis right now. There’s a busload of Semtex parked outside the Supreme Court, and with Atlas planning to off one of the Justices, they can seize control of political power in Washington. Whatever needs doing around the house can wait until the end of the season. There’s only one episode left, Julie! 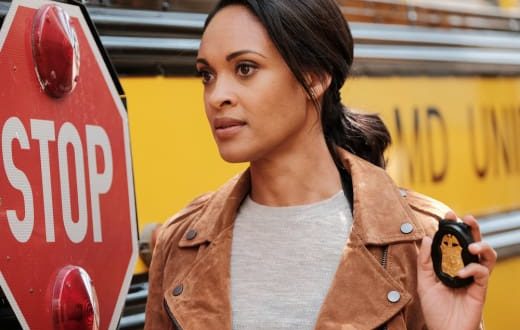 So, yeah, that’s Atlas’s plan. Without Brooks alive to occupy a coveted decision-making seat, another Justice needs to die in order to imbalance the numbers. And to do that they need the aid of their fixer, Eli, who Bob Lee and Isaac spent most of “Patron Saint” tracking down. That’s where all the action in the episode came from, but it’s also where we got to see the development of Bob Lee and Isaac’s relationship, which has really blossomed in this third season. Watching them clear rooms together and communicate in military shorthand might be par for the course in an action series, but it’s nice to see them getting on.

We also got a nice character moment between Isaac and Nadine, who was hit in the neck with some shrapnel when the wired-up school-bus detonated. Her fate remained uncertain at the end of “Patron Saint”, but it’d be an unceremonious death for long-running, well-liked character, so I imagine she’ll be fine. As for Red Bama (Gerald McRaney) and the rest of Atlas’s cronies, I’m not so sure. Bob Lee is fully in Finale Mode at this point, and before he puts the rifle down to happily paint picket fences for the rest of his days, he has some people to shoot. The show didn’t get that title for nothing.