It’s easy to like Becky Sharp (Olivia Cooke) – even though it shouldn’t be. That’s the secret of ITV’s adaptation of William Makepeace Thackeray’s classic novel, which has had its edged softened for a sensitive contemporary audience. In Vanity Fair Episode 3, Becky was at her most manipulative, her most duplicitous, but Cooke – and, I suppose, her cartoonishly unpleasant surroundings – keep her charming and compelling all the while.

I mean, who wouldn’t feel sorry for Becky this week, in servitude to Frances de la Tour’s crotchety Aunt Matilda? The cruel old bird was a scene-stealing nightmare, constantly enlisting Becky to serenade her into the wee hours and dispose of unwanted guests. One of them was Sir Pitt Crawley (Martin Clunes), who was so desperate for Becky to return and oversee his household that he offered her his hand in marriage. I’m sure she’d have taken it, were circumstances different. Alas, Becky had already cheekily married Rawdon (Tom Bateman) off-screen; a matrimony that landed them both in disrepute with Aunt Matilda, who shrieked that Becky was a vixen.

Fair enough, I suppose. She’s certainly self-interested, but who can blame her at this point? Vanity Fair Episode 3 returned to the tribulations of the Sedley family, whose extensive debts have returned them to a life of rural poverty – even their manservant, Sam (Richie Campbell), cheerily found alternative employment. This is, of course, all the fault of John Osborne (Robert Pugh), the penny-pinching father of George (Charlie Rowe), whose marriage to Amelia (Claudia Jessie) was condemned by both of their fathers. John, who is evidently tighter than an Italian waiter’s trousers, didn’t want his good family name being sullied by attachment to debt-ridden has-beens. And Mr. Sedley (Simon Russell Beale) understandably didn’t want his daughter assuming the name of the family that ruined him. 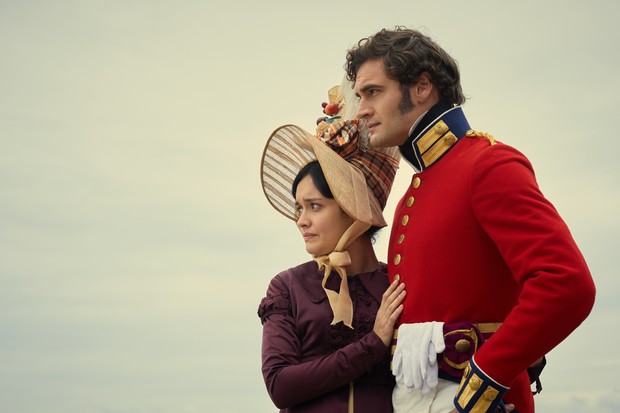 But love, as they say, conquers all, so George and Amelia got married anyway. And it surprisingly went rather well, thanks mostly to the efforts of George’s friend Dobbin (Johnny Flynn), who is clearly in love with Amelia – which didn’t go unnoticed or unremarked upon by Becky. But really it was the thoroughly detestable George who had a turnaround in Vanity Fair Episode 3, standing up to his father in a strong scene and confessing his true feelings for Amelia in a moving one. Romance was in the air.

But what’s also in the air is impending war, and that hung heavily over Vanity Fair Episode 3, as Rawdon, George and Dobbin all prepared to deploy – and it looks as though they’ll be taking their wives with them. Napoleon Bonaparte has a bee in his bonnet, probably about being French, and that political turmoil will likely shape the rest of the story. Just like the Sedley tragedy had something to say about the fickle nature of social status, so too did the late Lady Crawley (Sian Clifford) comment on the obliviousness of the upper class when it comes to worldly affairs. When her husband read aloud the news of Napoleon’s escape from Elba, she asked simply, “Who?”