In the new Showtime series Kidding, Jim Carrey’s bizarrely elastic face is on TV for the first time since 1990’s In Living Color. And it feels like he never left – partly because the bulk of the show’s ten-episode season was directed by Michel Gondry, who worked with Carrey on Eternal Sunshine of the Spotless Mind. There’s something about Jim Carrey. I can’t put my finger on whether it’s his face, his mannerisms, his attitude, all of the above or none at all, but either way there’s something there. At any moment he seems liable to either enact a whimsical slapstick routine or murder a person for fun. It’s that teetering emotional see-saw that Carrey seems to permanently straddle which gives Kidding a compelling air of uncertainty – and, if we’re being frank, brilliance.

Carrey plays Jeff Piccirillo, a beloved children’s TV personality known as “Mr. Pickles” and thirty-year host of Mr. Pickles’ Puppet Time. He and the show occupy a coveted, Fred Rogers’-shaped space in popular culture; adored by parents and children alike, and a multi-million dollar trusted brand overseen by his executive producer (and father) Sebastian (Frank Langella). But Kidding isn’t just a deconstruction of the charming and unflappable kids’-TV figure – it’s a character study that hones in on a man who, following the death of one of his sons, is fundamentally broken and unable to suture the pieces of his life back together.

Carrey is so riveting here because he’s using the unpredictability of his personality to communicate the difficulties of coping in an industry that demands you don’t do so publically. He’s two people: Jeff and Mr. Pickles, and so much of his real life is wrapped up in his persona that he can’t extricate one from the other. As it becomes increasingly clear how little of his show and character he actually has control of, it becomes just as obvious that he has no way of dealing with his personal problems beyond parroting the lessons and hokey aphorisms of Mr. Pickles right back at himself – and it isn’t enough. 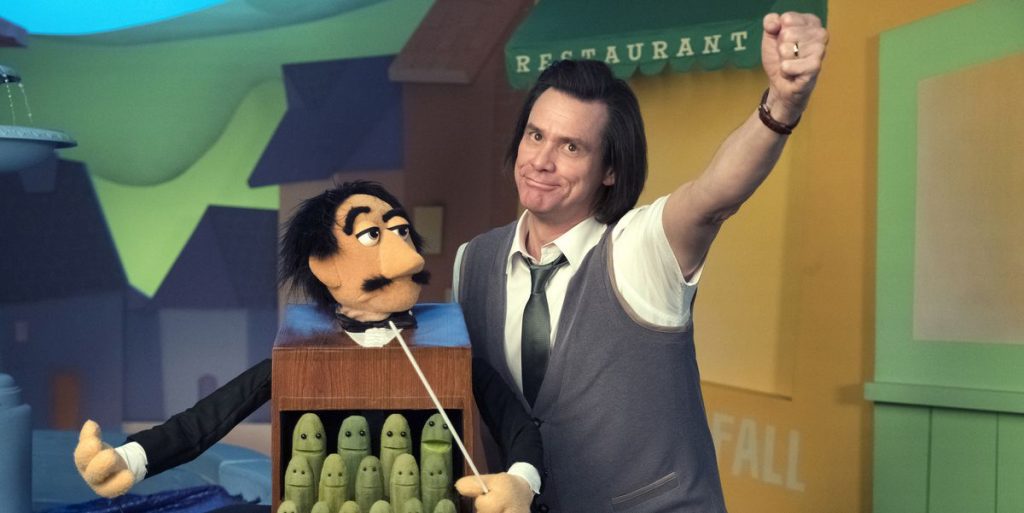 Because he can’t find closure, Jeff begins to allow Mr. Pickles’ Puppet Time to bleed into his real life; he wants to use the fuzzy characters as therapy, thinly-disguising the attempts behind important talking points like death and gender-fluidity. He can’t fix his actual life, so he’s trying to mould this one instead, which of course doesn’t work either. Kidding is frequently about a desperate, vulnerable, pitiable man, who has lost almost everything he loves, and deserves to be treated more like a human than, ironically, a merchandisable puppet. But it’s just as frequently about a man dangerously imploding, and that’s what gives it real edge.

You have Jim Carrey to thank for this, obviously, who might well be the best in the business at tiptoeing the fine line between lovably eccentric and dangerously deranged. And that you have no real sense of where Kidding is going helps, too. By the end of the second episode, Jeff has creepily bought and moved into the house next-door to his wife, Jill (the wonderful Judy Greer), who’s shacked up with another man. And a sinister shout-out must also be given to Jeff’s surviving child, Will (Cole Allen), who is proudly detestable, nakedly manipulative, and might well be more liable to cause catastrophe than Jeff himself.

Kidding cycles though these sometimes conflicting tones in a way that should feel frantic but never quite does; it’ll leap from jaunty puppet shows to weird sex scenes to Jeff peeping through windows, and yet the show’s earnestness is always there. Messiness seems to be a stylistic choice rather than a flaw, and despite all the potentially catastrophic goings-on, at its core is a story about an idealistic man who believes that everything will be okay gradually realising that it might not be. It’s a fine piece of work that I hope continues along these complex, challenging lines, and doesn’t succumb to its own scattershot sensibilities. Time will tell, but thus far it seems as though Kidding isn’t kidding at all.