Despite a few cheap narrative tricks, the Castle Rock finale, “Romans”, provides a strong ending to a captivating first season.

Despite a few cheap narrative tricks, the Castle Rock finale, “Romans”, provides a strong ending to a captivating first season.

The finale episode of a show like Castle Rock is something I generally approach with trepidation. Either it’s going to give a tremendous end game or feel like a cheap trick. With last week’s episode, I put my money on the former. Before I reveal if the odds were in my favour, I want to note something about Episode 9. That episode stayed with me for days. I kept examining it over and over in mind, even going back to watch Episode 7, “The Queen”. Revisiting that episode, knowing who the Kid truly is, makes it even more superb. Initially, I focused (as I was supposed to) on Ruth (Sissy Spacek) and her fractured world. But seeing it again, watching the son who hasn’t seen her in years try to gently reach her, is gut-wrenching. Watch Bill Skarsgård in his scenes with Spacek because he is doing so much that simply goes unnoticed with the first viewing.

Now, to that end game. For clarity’s sake, we’ll call André Holland “Henry A” and Bill Skarsgård “Henry B”. “Romans” opens on Henry A in the courtroom discussing the nature of doubt and what it would take for someone to take a life. “For me, I’d need it etched in gold and signed by God.” Conventional dramatic wisdom tells us that this is Chekov’s gun–before the hour is up, we’ll see this request delivered and the act completed. But who will be at the other end?

Henry B is at the other end of Warden Lacey’s (Terry O’Quinn) gun in a flashback where he reveals how much of his life has been consumed by imprisoning the devil from the woods. Cue a montage–Warden Porter (Ann Cusack), Lacey’s very specific Kid-themed painting collection, Jackie (Jane Levy) outside Murder B&B, Wendell (Chosen Jacobs) getting off the bus, Ruth preparing to jump off Alan’s bridge, and Henry A frantically driving. One of the neat tricks Castle Rock plays is using flashbacks to essentially make the viewer Ruth; you forget what is happening in the present because the past keeps engulfing you.

Henry B begs Molly (Melanie Lynskey) to lure Henry A into the woods, believing that with the increase in the schisma the door between worlds may be opening again. Since the two were together when the initial shift happened, it makes sense they must both be together to reverse it. Henry A, however, has bigger problems since Ruth is missing. On route to find her, his car is attacked by birds, causing him to crash. Thankfully Molly finds Ruth before she jumps, her confusion about what is or isn’t real overwhelming. They always end up on the bridge, Ruth tells Molly. But then something changes this loop. Molly asks about a narrative where Ruth did leave Matthew, the Henry B cut of her life. Ruth hesitates at this new possibility. 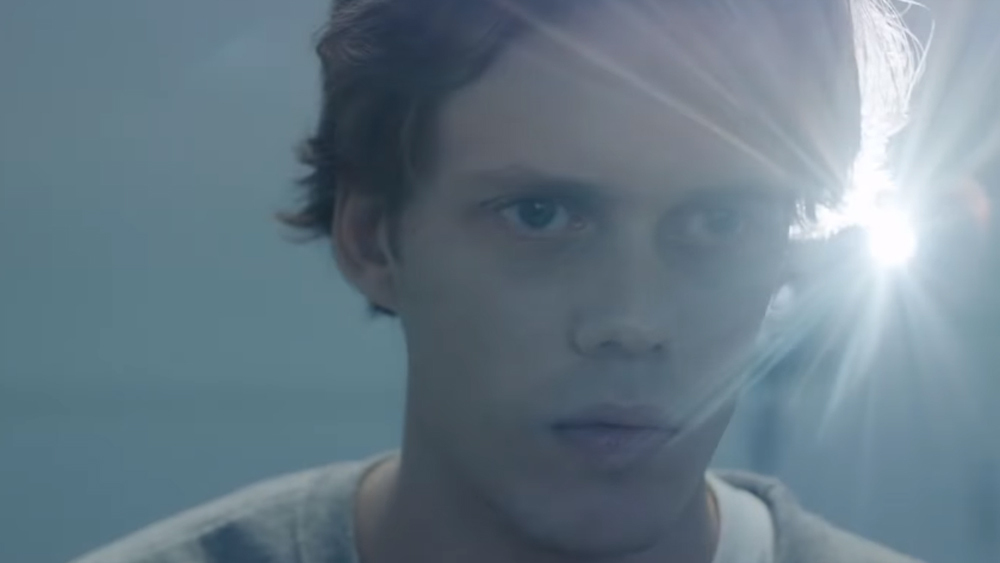 Back in the Henry A past, Reverend Deaver (Adam Rothenberg) takes his adopted son into the woods so that he can hear the schisma, and reveal his plans to kill Ruth for adultery. We haven’t had a Bible Verse of the Week in a while, so we get a doozy: Romans 6:23 which essentially states the penalty for sin is death or damnation.

On his walk back, Wendell stumbles upon the Filter RV where the police are investigating the death of Odin Branch (C.J. Jones) while his interpreter, Willie (Rory Culkin), looks on. As Henry A tells Molly in the next scene when she shares all she has learned and begs him to help Henry B, out in the woods someone always ends up dead. Before he can discuss anything further, he’s called to the police station on the pretext of picking up Wendell, but actually to be questioned about Branch’s death.

In the meantime, Warden Porter (Ann Cusack) has found a little soap figure in her home. She tries to find Henry B with Molly, convinced that Lacey was right to lock him up. When he isn’t there, she turns, walks into the street, and is immediately hit by a prison bus. Molly, who I am guessing is Henry A’s phone call, brings the soap figure, expressing her doubts about what is or isn’t true when it comes to Henry, the B Side. Henry A begs her to take Wendell home to his mother and then keep driving. Molly appears to be following his directions until Wendell reveals that he too can hear the sound in the woods.

And where is Henry B? Paying a visit to the cemetery where he is arrested in front a grave marked “Deaver Boy”. All season we have been set up to believe Henry A and B are foils, whether good and evil or merely two sides of the same coin. So here we have them, facing each other through bars, both imprisoned at the same time. The scene shows a dynamic shift; Henry A has always been the talker, but this time it is Henry B who dominates the verbal exchange, noting how he came to reconcile himself to the twin-realities. Henry A then asks one crucial question: what was Matthew going to do to Ruth? A familiar quote from Romans and suddenly we have a believer. 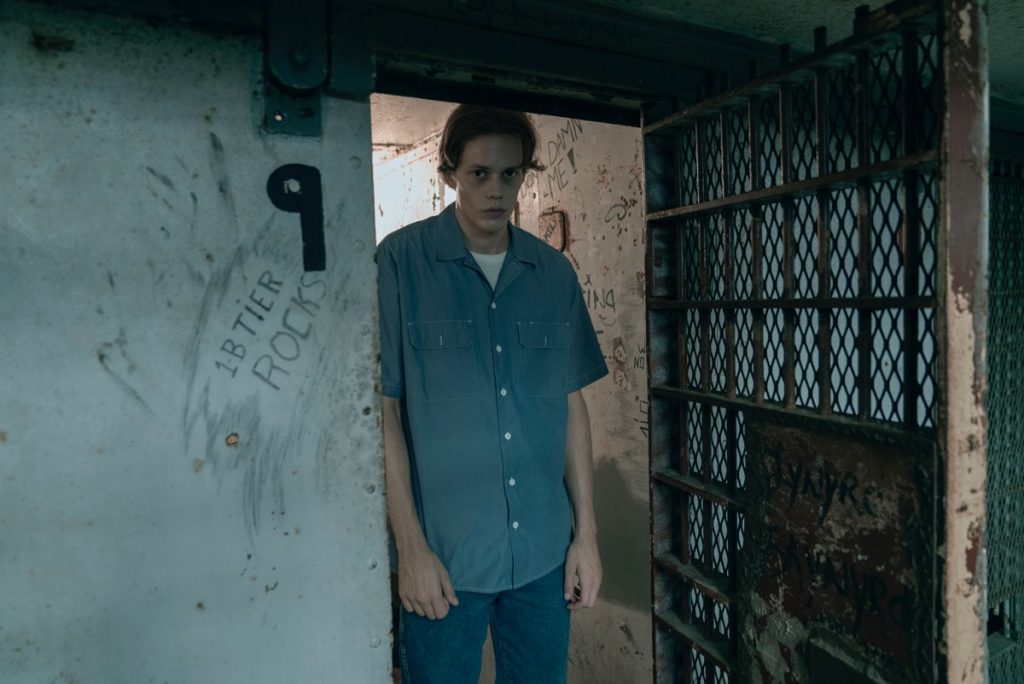 One interesting side note about Ruth and both Henries: there seem to be two truths common to both narratives. First, Ruth’s mind will break. Second, no matter the reality, Ruth cannot survive married to Reverend Deaver. Either she must run or Reverend Deaver must die.

The power of those two Henries must be truly remarkable because a prison fight breaks out, giving them the opportunity to escape. But the massacre isn’t just in the holding cells. The police station is full of the dead or dying, including Willie. Henry A tries to understand what happened, only to be taken at gunpoint by Henry B to the woods. We flash to the past where Henry A ran from his father, walking backwards in his own footprints, the screaming birds and ringing are deafening until the young boy pushes Reverend Deaver over the cliff. Although we know that he will survive the fall, it is still harrowing to see. In the present, Henry hears the ringing again but still manages to tackle Henry B, gaining control of the gun. As he aims, Henry B rears up his head, his face transformed into a demon. Cut to black.

“Truth doesn’t change. It’s just truth,” Henry A tells us in voiceover a year later. He is now resigned to his life in Castle Rock. “Most of us are trapped here for a reason,” he tells us after visiting the shared grave of Alan and Ruth and before visiting Henry B imprisoned once again. We aren’t given big answers, perhaps because Henry himself doesn’t have those answers. Only that in the end, he could not pull the trigger, so he has become the keeper of the devil. As he leaves, Henry B warns him to remember what happened to Reverend Lacey. Through the bars, a sinister smile slides across his face. It seems as if both Henries are punished with their own eternal damnation.

The finale seems a fitting end point for this story, though it did rely a bit too heavily on fake-outs. And those who need every narrative thread wrapped up may find it frustrating. Something about the unknowns worked in this context and nothing says we won’t revisit them at some point. I would venture the credits scene, where Jackie talks about finishing her horror story where her Uncle Jack’s began is setting up Season 2. But that could be just another misdirection. After all, in Castle Rock, nothing is ever what it seems.