Some of the films in Part 3 were found in the Horror Channel’s “Frightfest season” on TV; films which had been favourites in previous years at Frightfest. Part 4 features a number which were shown at this year’s event.

Frightfest is one of the biggest genre film festivals in the UK and is often seen as showcasing a wide range and high quality. I’m not sure all the films I’ve seen are of high quality, but these films have certainly added to the breadth of my viewing, which is what this challenge was all about. 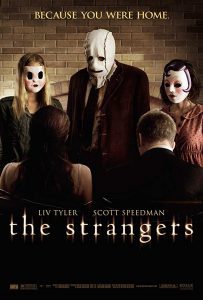 I’d never had the opportunity to see The Strangers until now, but it’s the film that crops up whenever the topic of home invasion arises. The plot is a simple one; and this is the best way to encapsulate exactly what could be scary about a situation like that: randomness, especially married with casual sadism. As the line quoted on the poster says: “Because you were home.”

A young couple (Scott Speedman and Liv Tyler) return home from a wedding reception, where it’s pretty clear they were not getting along: there is a natural tension between them even before the bad stuff starts to happen. Bertino really makes the most of that to patiently set the tone of the film; and when there is a heavy knock on the door, the atmosphere is already chillingly cold.

That knock marks the start of a home invasion: first, a young woman is at the door, apparently looking for someone; a little while later there are people inside the house, people with masks… she must have let someone in. The masked threesome can get away with whatever terrorising they decide to apply because the resident couple were simply in denial from the start: this kind of thing happens in films, sure, but not real life surely? A number of “user reviews” on IMDb say things like “haven’t they seen any horror movies?” but whether they have or not, no-one is prepared for violence in their home.

I’m very glad I’ve seen The Strangers at last, especially as it is talked about so often as the epitome of its subgenre. I admire the film a lot, especially the simplicity I mentioned earlier: other writers or directors may have been tempted to give extra backstory, close-ups, explanations or gratuitous jumps. That said, there are two other home invasion films which I still like more, one which is simple in a similar way (Michael Haneke’s Funny Games) and one which isn’t (Adam Wingard’s You’re Next): they are both witty, in their own ways, and keep the viewer on their toes. I don’t mean to say that any one of those films is better than The Strangers – they’re all quite different – but I know which suit my taste. 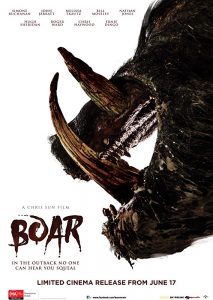 Boar was the first of the four films I covered for this year’s Frightfest, and it was lots of fun. I won’t go into the whole thing (having already done so), but if you like creature features, Australian actors or the great outdoors, this will be right up your street.

Boar is currently doing the genre festival circuit, so do look out for it if you get the chance. The real draw for me was John Jarratt (Mick Taylor in Wolf Creek): I’ve never seen him play a good guy before, but he can do it just as well as play a vicious baddie. 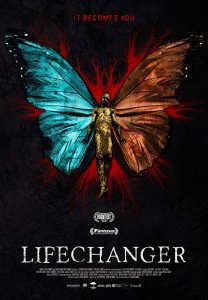 Lifechanger is a gripping, thought-provoking film about a shapeshifter (also a murderer). It’s also a tragedy, about love and time, and an absolute revelation.

Lifechanger, like Boar, had its UK premiere at Frightfest, and straight away became a new entry into my top five of the year so far. If you want to know more about it, read my full review, or catch it next month at Grimmfest. 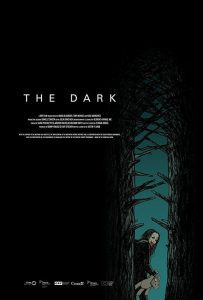 The Dark had its UK premiere at Frightfest recently, and it’s about a dead girl who unexpectedly makes friends with an abused boy in a forest, her territory. It is not perfect, but beautifully made, and very nicely acted… Read my full review if you want to know more, or watch out for it coming to DVD next month. 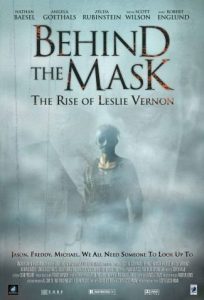 Behind the Mask: The Rise of Leslie Vernon (2006, USA), directed by Scott Glosserman

I thought Behind the Mask was going to be a daft film about a wannabe slasher; some people like daft horror films and some assume I do, but it’s rare. However, I was mistaken. Behind the Mask: the Rise of Leslie Vernon is witty (the opposite of daft, I reckon) and affectionately written, with subtle comedy and carefully drawn characters.

Behind the Mask follows a group of novice filmmakers who aim to make their reputation by interviewing and investigating Leslie Vernon. Vernon himself is working towards a reputation as the next big masked killer, modelled on Jason Voorhees, etc. He tells the group the protocols and formulas he should follow, and his techniques for getting the potential victims to go where he wants them (into the basement, for example, or investigating a sound outdoors). He tells them all about his requirement for a “survivor girl” (what I would know of as a “final girl”), and they watch as he sets up a house of unsuspecting teenagers, until gradually the team starts to feel like they’re too involved with something bad.

Behind the Mask was fab, it was very entertaining to see how the story played out. Another meta film about the genre, like Cabin in the Woods or Rubber, which is available to watch on Shudder UK. Thanks for the suggestion, Sarah. 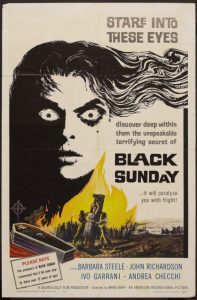 Black Sunday aka The Mask of Satan (1960, Italy), directed by Mario Bava

I’d never seen anything by Bava before, and – shock horror – never seen Barbara Steele in action either. So when the chance to watch Black Sunday came along, I watched, mesmerised: I am smitten. She was captivating both as the villainous “witch” (vampire, more like), and the lookalike innocent princess.

OK, there is a bit more to credit in this film than just those eyes. Mario Bava gave us a truly creepy atmosphere; an impressive amount of care was taken with the set production, and the quality of the special effects was ahead of its time. The story was a bit strange, though, to say the least; and more far-fetched than one might expect from the quality of production and direction. It is about a witch and her lover buried with “masks of Satan”, who then come back to life two hundred years later, due to the drop of blood of doctor visiting the vicinity (yes, a bit like Frank in Hellraiser). The witch plans to take over the body of the local princess, a descendant who looks remarkably similar. Fortunately, the doctor’s assistant and the princess’s brother work out what is going on (and spell it out for the bemused viewer).

Oh, the strange dubbing and average quality acting don’t spoil this film either: watch it if you get the chance, for a piece of cinematic history. 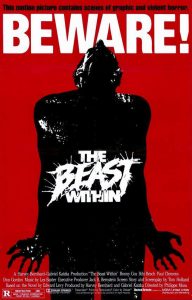 The Beast Within (1982, USA), directed by Philippe Mora

It’s easy to forget that Netflix holds films from earlier decades as well as fairly contemporary ones: that’s where I found The Beast Within. I was a little wary because my experience of eighties horror films has tended to be simple slashers or films too cheesy for my taste (I’m simplifying, of course), but this one was not; though, interestingly, it was written by Tom Holland, famous for Child’s Play, Fright Night, etc.

The Beast Within was a serious and scary film, with a steadily increasing tension throughout, and I was very impressed. It was about a young man who was very unwell… so his parents travelled back to the town where his mother was raped all those years earlier, in case it was possible to identify what bug his likely father had been carrying. But as well as physical problems, the boy develops behavioural problems, which link to an old mystery in that same town.

The film is famous for its special effects, though the acting is also notable. This is one to watch for anyone who loved The Fly, and for anyone who wants a different kind of monster. 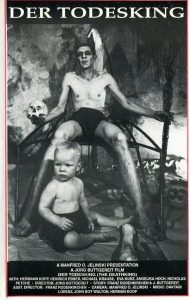 I know I’ve said this before, but Der Todesking: The Death King is a very strange film. It’s possibly a bit too experimental for me to give any value judgement, and so I won’t be providing a score in this case.

Der Todesking: The Death King is made up of seven episodes, titled with days of the week in sequence, about suicide and other nasty deaths. But these episodes don’t have plots as such; they are more like scenes taken out of context from separate, longer pieces. In between each one, we see a corpse gradually rot over the course of the film.

The direction and cinematography are simple, calm and unfussy; almost like a piece of journalism, in contrast with the content. The acting is good, in a naturalistic way; but none of the roles are demanding in the slightest. The content of the scenes did not engage me (though I’m sure it would some people): the tone was a little too melancholy to watch the whole thing in one go, but I’m not sure I would have got the film any more than I did, had I done so.

I loved the score, however: but I’m more comfortable with experimental music than experimental film, for some reason. It was harsh, mostly string and other acoustic music, and tended to play towards the end of each episode.

Catch it on Amazon’s Arrow channel, if you’re curious: but it’s quite an emotional investment. 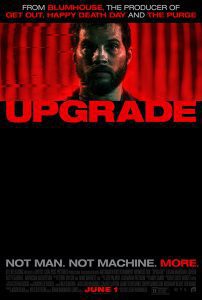 I was looking forward to Upgrade for so long (it arrived in the USA months before its UK premiere at Frightfest), and I loved it: this is now the second film of the year that I will be ordering on BluRay as soon as it is available.

Upgrade is a terrific blend of old fashioned and modern, Luddite sci-fi and high-tech body-horror, gritty and stylish, action and intellect, cityscapes and sunrises: I loved it!

Logan Marshall-Green plays a similar personality to the one in The Invitation, but with more action than talking this time. The tagline “Not man. Not machine. More” refers to his character, but the film is about more than just him. And the style of the film: it’s like what you’d have if Cronenberg made Blade Runner.

I’m not going to go into it any further; Jonathon’s already written a full review (though I think I loved it more than him). But when it comes out on BluRay, let me know what you think and we can go on about it together. For now… can’t wait to see what Whannell comes up with next. 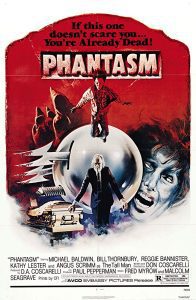 Another one from Amazon’s Arrow channel, Phantasm was a recommendation from Alex. I’m very glad I picked up on it and kicked myself for not having seen Phantasm before (I think it was because the posters made it look daft).

The down-to-Earth characters, the sort no-one would believe if they talked about a Tall Man and silver balls with blades, reminded me of the kids from IT: they took on this stranger because there was little alternative. I loved the surreal creepiness of the film, which was unlike anything I’d seen before. Phantasm is the first film I’ve come across during this year’s challenge which makes me want to watch the sequels.