As characters struggle to control their lives, The Deuce’s second episode sets up promising plot lines.

As characters struggle to control their lives, The Deuce’s second episode sets up promising plot lines.

The title of this week’s episode, “There’s an Art to This”, is definitely self-referential. There is an art to storytelling across sprawling casts and multiple locations, an art that HBO has become quite deft at accomplishing, be it in WestWorld, the Seven Kingdoms, or 1970s New York City.

Speaking of, Lori (Emily Meade) is quickly realizing that a pimp, particularly one as controlling as C.C. (Gary Carr), is a passe accessory for the successful p**n starlet. Not only that, even with an AFFA Erotic Award nomination under her belt, she’s already become part of the old guard, women who transitioned into p**n because it was safer than the streets. The new wave of p**n stars makes their way to the set without that curbside stop. They have agents, managers, and talk show appearances. Agent Kiki Rains (Alysia Reiner) is certainly a tempting option for Lori as she moves up the ranks. But there is no way that transition will occur without pushback from C.C.

Always the innovator, Frankie (James Franco) has made his peep show a touch zone. The Deuce has an intriguing way of playing with how women (and sometimes men) are manipulated. It never diminishes their intelligence, but instead shows how practicality overrides all else. One girl walks away, another notes how much girls are making at a similar establishment. Morality is a pricey luxury in this world. Limits are easily bent. Sadly, the new initiative doesn’t go as planned after one man literally gets his arm caught in the cookie jar. 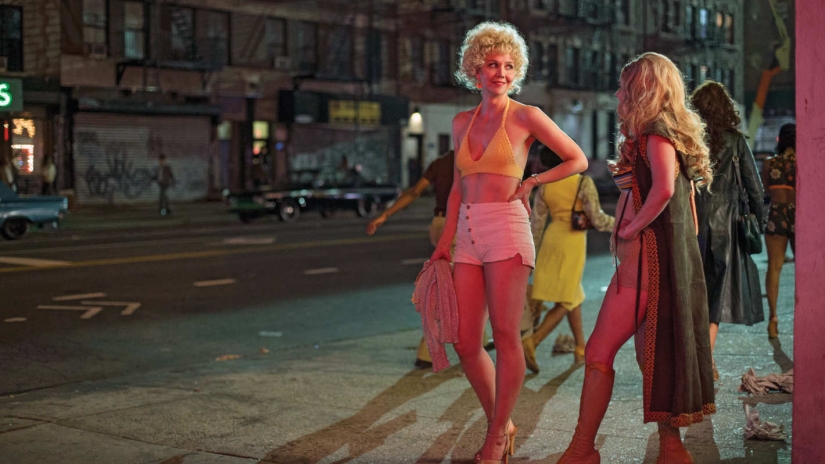 Candy (Maggie Gyllenhaal) has never been one to relinquish control; she walked the streets alone even with the very real dangers. It’s no wonder she’s pushing Harvey (David Krumholtz) to do something more artistic, like the laughable list of real p**n films based on literature. Her debates with Harvey are often the highlights of an episode, in part because Gyllenhaal and Krumholtz are divine together, but more so because they could be students at any film school, except they happen to be talking smut. Her desires to make something meaningful, moving beyond their humble beginnings, are echoed in her promises to her son that he might live with her again. Genevieve Fury (Dagmara Dominczyk) provides the perfect Lean In moment as a female director who has made it out of p**n and into grindhouse films. Her recommendations to Candy include finding real crew and actors to elevate her work. The look on Candy’s face when Genevieve tells her to stop using w****s because “they are dead around the eyes” prove the exception to her rule.

Abby’s (Margarita Levieva) relationship with Vincent (James Franco) is certainly the most stable on the show and “There’s an Art to This” is particularly sweet as they visit Coney Island together. In contrast with the other girls, Abby has always represented the book smarts and privileged world. How then does she reconcile Vincent’s work with her beliefs? Sometimes it seems Abby is a stand-in for the audience–an observer who cares about these people even as she disagrees with their lives. So to see her in the meeting at the end, talking about targeting the exact establishments her boyfriend runs, foreshadows an ending to those romantic afternoon sojourns and Hi-Hat baby showers.

Last week saw the killing of a tourist on The Deuce, a family man who just happened to die in a bad part of town. Chris Alston (Lawrence Gilliard Jr.) investigates the case to find out the murder was committed by a young hustler, turned into a murderer by society and desperation. A small plot line, but an important one that answers the question of why these problems can’t be settled just because Goldman (Luke Kirby) and his boss want to clean up New York. The world is a dark place where tourists troll for little boys and fairy tales are easily adapted into p**n.

As Candy tells Larry when he approaches her about becoming a performer in her film, sometimes it is about giving up control. This extends to many of the characters, including poor Paul (Chris Coy) who just wants to run a clean, non-mob underwritten bar. Others are just starting to see their own potential. The season is setting those things in motion, one way or another.