Into The Dark provides an engaging plot device and a sophisticated, sadistic hitman. Episode 1, “The Body”, is a good start to the year-long horror event series.

Into The Dark provides an engaging plot device and a sophisticated, sadistic hitman. Episode 1, “The Body”, is a good start to the year-long horror event series.

In partnership with Blumhouse Television, Hulu Original Into The Dark is a year-round horror event series, with a new installment released each month inspired by a holiday and will feature Blumhouse’s signature genre/thriller spin on the story. The first episode, “The Body”, premieres at the LA Film Festival on September 21 and will be available to stream on Hulu on October 5. This recap will contain minor spoilers.

The first episode of Hulu’s Into The Dark opens with the hitman (Tom Bateman) examining what I can only describe as a maggot-infested cake. The person paying him to carry out this assignment calls him to check if he has killed the target. The hitman proceeds to describe the cake and calmly explains why it is infested. Apparently, the cake is a well-known delicacy and he takes a  bite. This scene is set so you understand just how strange this hitman is, and also provides the audience with the intuition that the character lacks empathy and has zero regards for human life. Nobody cares about describing a cake immediately after killing someone – “The Body” is a strange yet a compelling opening episode for Into The Dark.

As the title suggests, it’s the body he has to move that is causing most of the issues. It’s Halloween, and of course, the city is buzzing with pranks, mischief, and everyone wearing what the hell they want. As he strolls through the city, almost forgetting the fact he is dragging a body, wearing a typical hitman-style suit, with blood smeared on the side of his face, he attracts Halloweeners on the way to a party. They think his costume is brilliant… 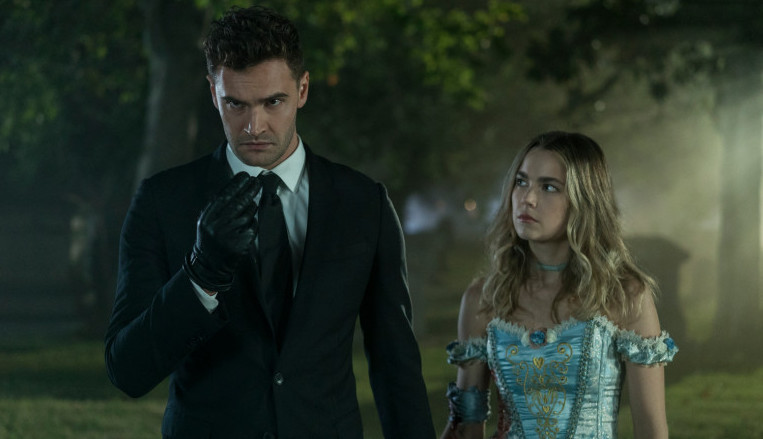 And that is the gag of “The Body”. That because it is Halloween, he cannot be dragging a real dead body through the streets; it must be a costume. The interested group of Halloweeners peer pressure him to a pulp, trying to encourage him to come to this well-themed Halloween party, insisting that he would look the part. The hitman snarls and shows his sadistic side as he refuses to acknowledge that the body bag is a costume. Due to the police scoping nearby, he agrees to join the party anyway. Into The Dark does not really explain his motives.

His intentions do not make sense but it makes for an interesting story watching people think a hitman is pretending to be a hitman. The slumped body bag at the party serves amusement, especially as people start taking selfies next to it. The entire purpose is to serve up irony on a plate, and the people eating off it are blinded by the occasion. “The Body” gets more interesting when he is confronted by the spellbinding Maggie (Rebecca Rittenhouse).

It’s worth noting that Maggie is designed as a character to be beautiful and compelling enough to attract a calculated psychopath like the hitman. She looks into his eyes with such mystery that I was nearly charmed by her spell. Eventually, the story turns into a violent cat and mouse, with the group of Halloweeners figuring out that the body is actually real, and due to being technically complicit in the situation, they try and get out of it by stealing the body and finding a way to get rid of it. The hitman, and his newly-introduced sidekick Maggie, scope the streets to find the group and retrieve the body.

The main strength of Into The Dark Episode 1 is the sophistication of the hitman and his ideologies. At times, he goes on long, dark, pitiless speeches about people and the way modern society works. He lays down his thought process a number of times without prompt but then does not respond when a character requires an answer. The downside to the entire episode is once it becomes cat and mouse, the gag runs cold and you are only interested in the development of the hitman and Maggie – you could not care less about the group of Halloweeners scared for their life.

“The Body” is a great start to Hulu’s Into The Dark, and whilst the entire horror event series is a year long, it is already proving to be a well-thought-out concept. Let’s see what next month has in store.