The story of the biggest burglary in British legal history, committed by a group of elderly and experienced thieves in 2015. A great story and a great cast, both of which deserved a better film.

The story of the biggest burglary in British legal history, committed by a group of elderly and experienced thieves in 2015. A great story and a great cast, both of which deserved a better film.

Michael Caine, Michael Gambon, Ray Winstone, Tom Courtenay, Jim Broadbent, Paul Whitehouse… It doesn’t matter what the film is about, if you buy a ticket featuring even three of those six names, you’ll expect it to be gripping; fine drama at least, or possibly a damn riot. Unfortunately, King of Thieves does not come close to doing these fine actors justice.

King of Thieves is based on a true story – or rather, based on a magazine article which outlined the story – of a crime which took place in London just over three years ago. The Hatton Garden safe deposit company vault was burgled over the course of the Easter Bank Holiday weekend, with money valuing over £14 million, plus diamonds, gold and more stolen. Most of it has never been recovered, though the key figures were arrested. This is a famous story – at least here in the UK – not least because the thieves involved were nearly all in their sixties and seventies, making them seem even more audacious.

So we don’t go to watch King of Thieves for the story (well, the details of the heist are bound to be fun, surely?) but the remarkable cast. Just as the elderly thieves had been experienced and successful crooks in their younger days, this cast goes back decades too. The name Michael Caine makes me remember “you were only supposed to blow the bloody doors off!” after all: a heist is firmly in his acting CV. Ray Winstone has played crooks of one sort or another over the years, though the others have a somewhat more civilised reputation. In King of Thieves, they were all fabulous to watch, of course; my favourite being Michael Gambon, who had a small role as the fence, Billy the Fish. For the most part, though, the roles appeared to be undemanding: each of them played the same types of personalities we’ve seen them play before. Paul Whitehouse, for example, played his part almost exactly the same as the one he played in Ghost Stories.

(Lest anyone thinks I’ve forgotten, there was a younger bloke involved too, played by Charlie Cox of Daredevil. Sound actor, but – you know – not one of the names I went to see.)

The characters are written well, though; which is clear even though the portrayal is so familiar. A few are a little two-dimensional, but in general, there is some real down-to-Earth humanity expressed, especially in the couple of characters we see the most of. Caine’s Brian Reader, for example, is utterly bereft at the loss of his wife (Francesca Annis), and it comes across as natural that he would grasp at a new purpose when his daydream job suddenly seems possible.

I can’t deny they were – as I said – fabulous to watch. But the art of acting only showed itself a couple of times; most notably in one scene where Reader (the “gov’nor” at that stage) has a disagreement with Broadbent’s Terry Perkins and they need to be pulled apart by Winstone’s Danny Jones. For those few minutes, the viewer can see what fearsome criminals they may have been in the past. 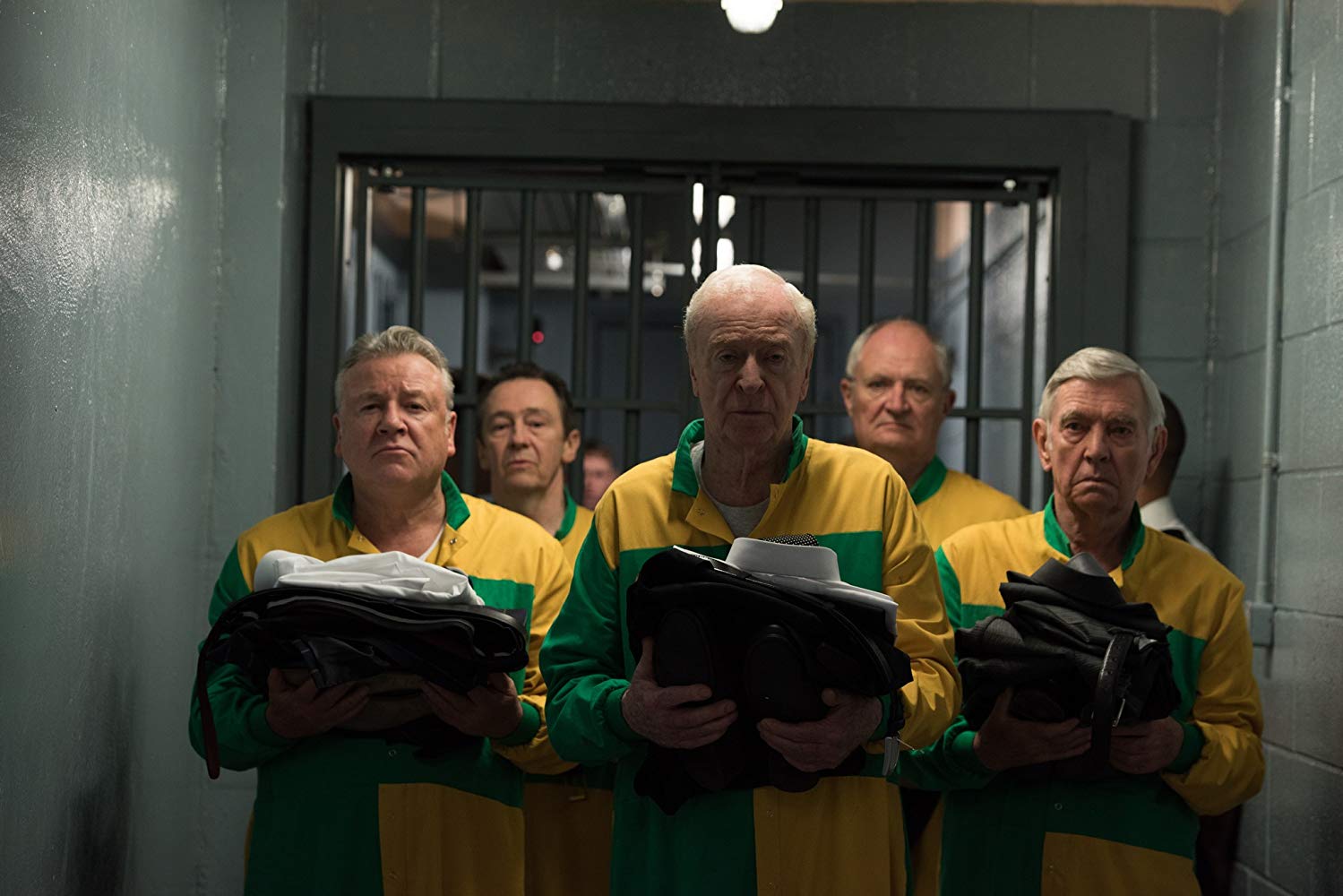 Interestingly, the thieves’ backgrounds are not mentioned at all until near the end of the film, when they are discussed by police. They simply seem like amusing/sad old men a lot of the time (which they must have seemed to the public reading the news back in 2015), and we have no context for who they are. There is a nice visual technique used a few times, though: here and there during King of Thieves, very brief snippets of what appear to be sixties or seventies cop shows (old car chases, the actors’ old faces, etc.) are presented, teasingly, as if to suggest these gents have a colourful past.

The film was directed by James Marsh (The Theory of Everything, Man on Wire) and written by Joe Penhall (Mindhunter, The Road, Enduring Love): Marsh clearly has experience with films based on true events, and both have delivered some successful and pretty serious, tense titles. So what went wrong here? It looks good, was nicely made and all that (not to mention the cast), but although the story was enjoyable, the pacing and tone of the film in general just did not work: at times, it seemed like it was trying to be a Last of the Summer Wine style gentle comedy (there were some funny moments, but not funny scenes); other times, I found myself expecting to hear “This is the self-preservation society”… but only in the distance, because this was not a romp or a caper by any means.

Sorry, chaps: the story was interesting, and the cast was endearing… but the story should have been exciting, and the burglars should have been dangerous. Perhaps it’s because Caine has such a strong association (not just for me, I’m sure) with an excellent, classic heist film; or perhaps King of Thieves simply had the wrong team behind it. But I really do hope there are better films to follow for all the cast: this is not the one to remember them by.