You might have picked up some clues to my taste by now, but I figure it’s about time I list some of my actual favourite horror films: perhaps the comments I’ve made and the films I’ve rated will have some context. Here are a few headings and my favourite for each:

Enough for now, though I’ll run through a few more headings next time.

Most of my favourite films from 2018 so far have been horror, as it happens (Annihilation, Hereditary, A Quiet Place, The Secret of Marrowbone, Upgrade). Some say the genre’s having a boom right now. Suits me! 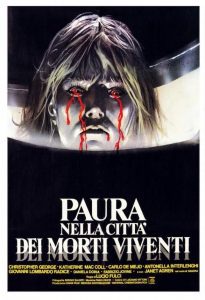 City of the Living Dead AKA The Gates of Hell (1980, Italy), directed by Lucio Fulci

Italian horror – and indeed 80’s horror – is a category I’m still not terribly familiar with. In both cases, I’ve seen more films I’d consider daft than serious or scary horror, which is definitely my preference. So I started City of the Living Dead hoping it wasn’t going to turn out to be a daft one like Zombie Flesh Eaters or Lenzi’s Nightmare City; that was not my thing at all.

City of the Living Dead is the story of a gate into Hell opened up as a result of the suicide of a priest… so yes, of course, it’s far-fetched; but on the plus side, it was inspired by the Lovecraft setting of Dunwich. I was pleasantly surprised: the plot is serious, the direction is very creepy and the special effects downright realistic in parts. I will give Don’t Torture a Duckling a try sometime.

Recommended by d_twit and watched on the Amazon Arrow channel. 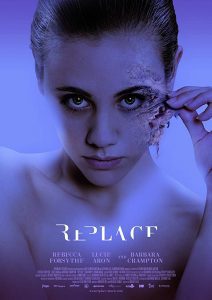 This was a film from last year’s Frightfest, which I found on Shudder; and starring Barbara Crampton, who will be a special guest (and lifetime award winner) at this year’s Grimmfest. It was her name that drew me to Replace, and especially pleased when I got there to find Richard Stanley’s name amongst the writers’ credits; I am a longtime fan of his sci-fi horror Hardware.

Replace is about Kira (Rebecca Forsythe) whose skin starts to develop patches which appear to be dry and prematurely aged. She reacts (out of panic? psychosis?) by replacing those patches with skin from other women… And the film takes us on a tango of stylish and bloody twists and turns from there, via a seductive neighbour (Lucie Aron) and a driven doctor (Barbara Crampton).

Replace features some of the same contemplative treatment of age and female beauty as Lifechanger did of time and loss. It is surreal in style, and quite captivating. The writing is quite simplistic, though; but perhaps that is appropriate for a fable. The flaw which bothered me a little more was the overdone music. Overall, I’m pleased to have seen it: there aren’t many films with such a breadth of female characters (especially while utilising so few characters)… and I don’t think I’ve seen such a wicked gleam in Crampton’s eye before. 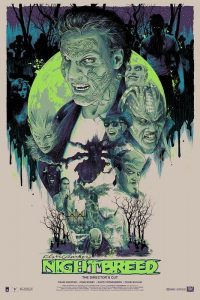 I like Clive Barker’s writing a lot, and I adore the first feature he directed, Hellraiser, but I’d never seen Nightbreed; I think because I was nineteen when it first came out and it seemed like a cheesy thing about made-up monsters in the promotion. First impressions can stick around, and so it took a long time for me to get around to it; but now that I have, I’m glad I’ve seen it, and I am pretty sure I wouldn’t have been mature enough back then.

So I found Nightbreed on Amazon Prime and switched it on expecting a story about a community of monsters (now that I’ve read plenty by Barker, I no longer expected cheesy). But what I actually watched was a film about being an outcast, being misunderstood, being persecuted by authorities and finding a group with which to belong… a fable about what it’s like to be a gay man in modern America, perhaps? Wouldn’t surprise me: Barker is gay himself and puts a lot of emotional insight into his writing.

The acting, writing and direction were all just slightly exaggerated; but it was probably a little difficult not to, having just left the melodramatic eighties behind. The production and special effects were high quality though, and it’s a great pity the film hadn’t been marketed better when it first came out: apparently the plot was misunderstood by the distribution company, who presented it as a slasher; they didn’t understand that “monsters” don’t always equate with “bad guys”. It deserved more recognition, and deserved to be seen by horror fans on the big screen, perhaps particularly those who felt marginalised in some way: it shows what strength there is to be found in surrounding yourself with people in the same boat. 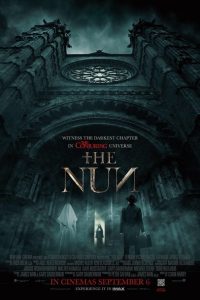 If you don’t already know, The Nun is a spin-off story from The Conjuring series, based on a demon who plagued Lorraine Warren in the second film. I have immense respect for James Wan and his series (the first film particularly), but felt utterly let down and pissed off by this new “chapter”.

Don’t want to think about it now… read my full review to find out what the issues were. 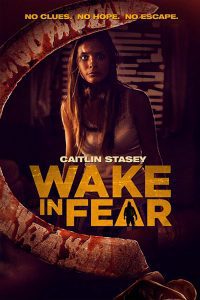 Wake in Fear was an interesting little find on the Horror Channel… two plot strands which come together only in the very last scene. The main plot is about Chloe (Caitlin Stasey) who wakes up to find she is a prisoner, along with an unknown number of other young women. The secondary strand follows Andrew (Markus Taylor) who takes a delivery job from a mysterious client.

It’s a low budget film, and Narang’s first feature, but sharply filmed and well acted. The writing was somewhat flawed, but that may have been a by-product of keeping the film short; and I forgave that because of the good quality tension throughout. Some of that tension is down to the clever framing of certain scenes though a good deal of it was due to poor Chloe: she had some very painful dilemmas at times and faced the challenge of her situation courageously, and all of it in her underwear. 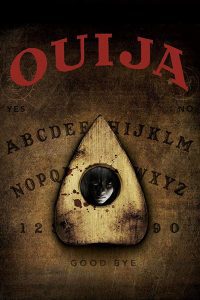 I was aware of its reputation… everyone says Ouija is poor, though Ouija: Origin of Evil (the one directed by Mike Flanagan) is worthwhile. I thought I’m not going to watch the sequel without seeing the first film first, and it was there on TV calling out to me.

It was indeed poor; though I found Ouija more engaging than The Nun. It was an undemanding teen mystery horror, a bit like Truth or Dare (but less gory). Sometimes I enjoy a lighter weight film; and today I did, especially after the last few! The story held together OK, the special effects worked for me, and the requisite attractive teenagers didn’t do more screaming than necessary: what more can I ask. Olivia Cooke has been in some much better films, though: if you’ve seen Ouija don’t let it put you off what she can deliver. 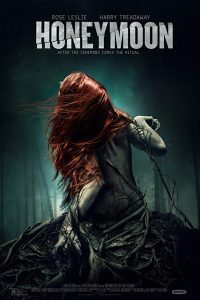 So sorry it’s taken me this long: here’s a good modern horror film directed by a woman. Honeymoon features a couple enjoying some woodland seclusion, and trying (with difficulty) to get to know each other more in their newly hitched condition. Paul (Harry Treadaway) finds his bride Bea (Rose Leslie) in a stupor in the forest late one night and nothing is the same after that.

The acting, production, atmosphere and dialogue are near perfect in Honeymoon. I confess I didn’t entirely understand the ending, but I trust that is because it is somewhat open to interpretation, rather than flawed writing. The writing is absolutely riddled with metaphor (so I forgive the flagrant use of horror tropes), most notably about fragile masculinity, and marriage anxieties. Oh, and it’s romantic and beautiful to watch in parts.

Several people recommended this to me: Steven Sheil, Darren Lucas, Sew Much Geek… And I’m so glad they did; I’d ignored this listing on Amazon Prime a few times, though will certainly watch out for anything else Janiak makes. 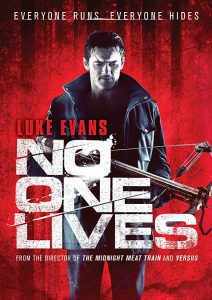 No One Lives was an absolute riot. I found it on Film 4, realised it was directed by the same person as Downrange, and was gripped within fifteen minutes. Two groups of people meet by chance at a diner: one is a gang of vicious crooks; the other is an apparently loving young couple. They make poor first impressions (on both sides), so when they run into each other again… things kind of spiral out of control.

There are no goodies and baddies in No One Lives, there are just people you debate rooting for because they are more ballsy than the others, albeit briefly. Luke Evans is not the softy you may have seen in The Girl on the Train (as you may guess from the picture). He’s violent, twisted and exciting.

No One Lives had a similar feel to 68 Kill which I watched a few months ago, in that a bad situation keeps escalating in unexpected ways; but this film is more action/excitement and less talking/humour. Looking forward to seeing what Kitamura brings to Nightmare Cinema next month…

I haven’t watched a great Japanese horror for ages, so when I found Pulse that Sarah Miles recommended, on Amazon’s Arrow channel, I went for it. It was creepy, surreal and mesmerising, beautifully shot, and downright sad.

Pulse is essentially about people disappearing, and also about the dead returning to this world via the Internet, all done via the storylines of two separate groups of people. Sure, that sounds a bit loopy; but the film is actually more allegory than plot: so I’ll take back what I said. It’s not about people disappearing, etc., but about loneliness, about the way individuals are removed from those around them, perhaps partly due to use of electronic communications.

The scenes involving the ghosts – particularly towards the end – are very moving and atmospheric; both the acting and special effects are simply but effectively delivered. I’m not sure I’m strong enough to watch Pulse again, but I’m glad I caught the chance to watch it this first time. 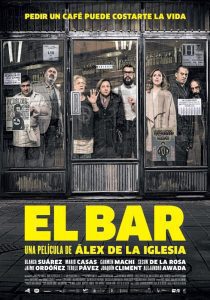 The Bar is frankly a remarkable film; another horror about an everyday group of people in a believable situation which gradually – and drastically – goes downhill. I can’t possibly tell you what happens, but it goes from entertaining and amusing to bloody scary with no warning, and this change in tone happens more than once.

I found The Bar on Netflix and would have watched it sooner if I’d realised it was directed by the same person who made the amazing Acción Mutante. Another film which had its UK premiere at a Frightfest; perhaps that is a good indicator of quality horror… or at least films which match my taste. I enjoyed The Bar a great deal: this one isn’t a film about supernatural things, monsters or gore (for the most part), but people and how they deal with each other, while dealing with the unknown.