Not quite as braindead as last week’s episode, “I Lose People…” gets the band back together, but they’re still playing covers.

Not quite as braindead as last week’s episode, “I Lose People…” gets the band back together, but they’re still playing covers.

“I Lose People…” is one half of Morgan’s gloomy self-loathing catchphrase; next week’s episode, “…I Lose Myself”, will complete it. That’s the level of emotional depth that Fear the Walking Dead is operating on in this insufferable fourth season, and now the band is back together for the finale, I can’t help but wonder if Morgan losing himself, everyone else and any potential scripts for subsequent seasons might be in the best interests of everyone.

Alas, here we are for now. It was a week of absurd contrivance, beginning with last week’s laughable revelation that Alicia (Alycia Debnam-Carey) and Charlie (Alexa Nisenson) had somehow stumbled upon John (Garrett Dillahunt) and Strand (Colman Domingo) on their little island paradise. That rescue goes predictably well in “I Lose People…”, and by the time it’s over everyone is bundled back into the SWAT van with Martha (Tonya Pinkins), who arrived, shouted some s**t, and collapsed.

Martha is, let’s be frank, a ridiculous villain, and she’s the last thing the show needs as it ambles towards some kind of conclusion. Her backstory is pathetic and thus far her attempts at villainy have been laughable; she somehow escapes during “I Lose People…”, despite having been shot and tethered to the inside of the parked, closed-up SWAT van, but all she manages to do with her newfound freedom is scribble on Jim (Aaron Stanford), who heroically threw himself off a building. 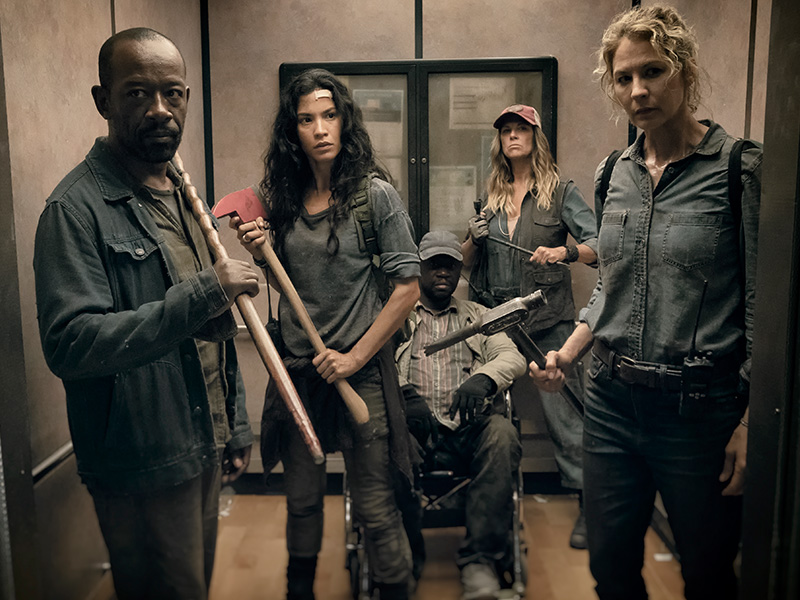 Jim’s precipitous suicide was part of a ludicrous scheme to get Morgan (Lennie James) down from the hospital roof, after he had already engineered another (ludicrous) scheme to get everyone else down first. No casualties, I’m not entirely pleased to report. Which meant that everyone got to longingly gawp up as Morgan, noble as ever, ranted into a walkie-talkie about how he has to atone and save everyone. This guy has a mood swing in the back garden. Am I the only one who’s utterly sick of this patronising redemption shtick? He already ran from Virginia to Texas like Forrest Gump – hasn’t he atoned enough?

Apparently not. It’s funny I should mention Virginia, actually, as “I Lose People…” ends with everyone in the SWAT van (Morgan obviously makes it back to the ground, thanks in part to a convenient fire truck) deciding they’re going to head there. Are the worlds of Walking Dead colliding? Christ, I hope not. The last thing either show needs is characters from the other. With the obvious exception of Queen Hotness Alicia, who would be welcome anywhere, I can’t think of a single character in Fear the Walking Dead who deserves to survive next week. Morgan, as far as I’m concerned, doesn’t lose people nearly enough.