The Good Place is back for its third season and we finally get to see what happens to Eleanor, Chidi, Tahani and Jason after they were sent back to Earth for one more try to get things right.

The Good Place is back for its third season and we finally get to see what happens to Eleanor, Chidi, Tahani and Jason after they were sent back to Earth for one more try to get things right.


The Good Place is a bit of an unusual series. During its first season, it was considered a hidden gem; a quirky, off-beat sitcom that saw a woman mistakenly sent to heaven and her exploits as she desperately tried to avoid being found out. I don’t think anyone saw the twist coming at the end of the first season where we find out that Eleanor and her friends have actually been in “the bad place” (that’s hell to you and me) all along.

The second season of The Good Place takes a successful formula and mixes it all up. The characters keep having their memories erased as Ted Danson’s brilliant Michael, the architect of their misery, keeps rebooting their experiences to find the perfect torture for the group. As far as I’m concerned The Good Place is a great sitcom when judged as a “traditional” comedy series; the writing is sharp and funny, the characters are great (even down to the smaller side characters) and the relationships between them feel genuine and only serve to enhance the chuckles. But where The Good Place really differs and comes into its own as something truly unique is in the plot. Most sitcoms will have some wacky, outlandish thing happen, but it never sticks for the next episode – anything substantial is usually reset by the next week. Sure, they might have overarching themes throughout the whole run but broadly speaking the plot isn’t the reason people tune in. The Good Place is different; it’s a sitcom that works in its own right as a genuinely funny series but it also has a really interesting setting and a plot that seems to have real stakes from one week to the next.

I think what I’m trying to say is that I love The Good Place, but in a very long and roundabout way. I don’t want to undersell how excited I was about the series finally coming back after what felt like a hellishly long time. I think that’s something notable and special in itself. I’m struggling to think of many other sitcoms that I have anticipated quite so eagerly. Sure there are a lot of sitcoms that I love, but they’re 20-minute fillers to lighten my day. This is the first comedy series that I can think of where I need to know what’s happening next. 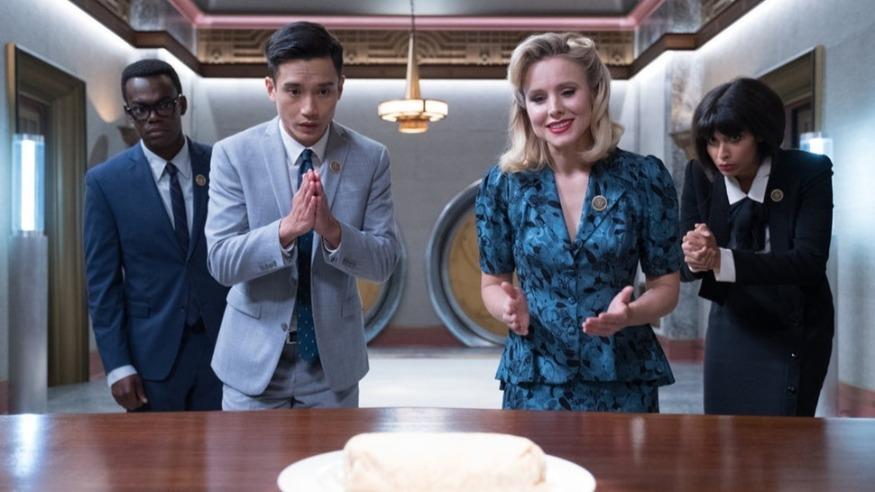 I am very happy to report that The Good Place has done it again. Season three takes the central premise and flips it, again. The four main characters, Eleanor (Kristen Bell), Chidi (William Jackson Harper), Tahani (Jameela Jamil) and Jason (Manny Jacinto), are sent back to Earth and are on trial for their eternal fates. Each of them were saved from their own death to see if they could genuinely be good people and earn their place in the Good Place once and for all.

The opening, double-length episode, “Everything is Bonzer!”, does feel like a bit of a slow start in terms of the plot, as Michael and Janet (D’Arcy Carden) attempt to get Eleanor, Jason, Chidi and Tahani together in the real-world. That said there is no shortage of laughs this time out; it was just nice to spend some time back in the company of the quartet.

I love The Good Place and the new season appears to be giving me more of what I love, but also something new. I’m really interested to see where this season is heading and that’s quite a unique experience for a comedy series.