Continuing the list from last time here are some more of my favourite horror films, though it is prone to change… 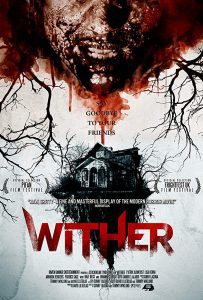 Not watched anything Swedish for a while, so when I found Wither on Amazon Prime, and I recognised the directors’ names from the Grimmfest programme I thought I’d give it a go… The word is that Wither is a modern, mega-gory take on Evil Dead, and considering these are the same directors as the new Puppet Master film, I felt kind of prepared for something nasty, and a long way from intellectual!

As it turns out, Wither was not good. It was made up of standard tropes, characters without character, and more gore than story. It’s about a group of friends on holiday in the middle of nowhere, who just happen to disturb a local demon known as a Vittra. Sounds straightforward enough, but the plot required a previous resident of the holiday home to explain things to the gang; and fortunately, he just happened to be hanging around and available to do so. Sure, the acting was reasonable, but none of it was exactly demanding. Wither was reasonably well made, but not well written in the slightest.

I’ll get the chance to see their short Mystery Box (starring the same lead, Lisa Henni) soon at Grimmfest, and I really hope it has more to say than Wither did.

Now this one was a winner, a huge relief after yesterday’s dud. Ataúd Blanco started off plain creepy, turned into something like Run, Lola, Run meets The Vanishing (with added bloody violence) and then turned heart-stoppingly shocking. No, I really mean it: by the end, I considered Ataúd Blanco to have the single most shocking plot of the season so far, and I’ve recommended it several times since watching it.

On the surface, Ataúd Blanco is a mystery thriller about three missing children, and the determined mothers and carers who put so much heart and effort into finding them. Underneath that surface, it is also a study of maternal commitment, fear, childhood trauma and I don’t know what else… because it’s a sublimely written story above all, with – I’m not going to let it go – a f*****g shocking ending. Oh and excellent acting, but I only just had the headspace to notice that.

This was another film I found on Netflix that had its UK premiere at FrightFest, like The Bar. Wonder if Netflix picks up many of those…

I’m not sure if I have the nerve to watch Ataúd Blanco again but I want to. Bravo, Daniel de la Vega.

Horror Express marks yet another change of pace (I did say I like variety, didn’t I?), a fairly gentle mystery/monster movie about a prehistoric creature being transported from China to Europe. It was recommended to me by Alex Vorkov, and is my first Cushing/Lee film of the season.

Horror Express was an odd flick, though very nicely made: odd in the sense that it’s more like an Agatha Christie story reimagined as a mixed-genre film. It was worth watching, not least as a showcase of those classic talents, but my personal preference is for something a little heavier. Still, at least there was a brief and fabulously dramatic role played by Telly Savalas. 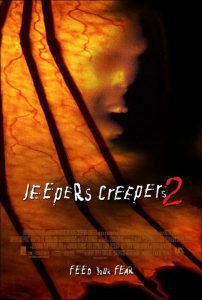 Yes, I know there are issues with the director’s reputation… but Jeepers Creepers II has Ray Wise in it! (And I really admired the first film.) So when I spotted it on the Horror Channel, I couldn’t resist.

It turned out to be really rather good, at least for the type of film it is… teenagers in peril from a supernatural creature, a lightweight film with nasty killings. You know the sort: but believe it or not, Jeepers Creepers II had a nicely constructed plot with believable characters; and we got to know the monster a bit more (via some telepathic communication to those teenagers). I liked the ending, and I just might give the controversial Jeepers Creepers III a try, while it’s still available on Netflix. 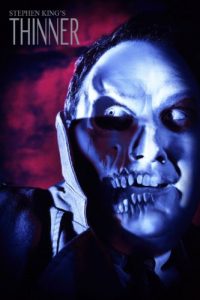 You probably know already, but Thinner is about an obese lawyer who is cursed to lose an unnatural amount of weight by a gypsy whose daughter he has accidentally killed in a car accident. It’s also a fable of class and ethnic divides… horror works so well as satire. Apparently, the book held moral messages to do with personal responsibility too (like Cujo, from what I’ve heard), but I don’t think this film could have held extra complexity.

Thinner was entertaining, and reasonably well acted. Pity about the production style, though: it looked like a cheesy mid-eighties film. That said, I’m glad to have watched it: even though King has written too many books for me to keep up with, I have some affection for the adaptations, and the majority have been made with affection and respect. 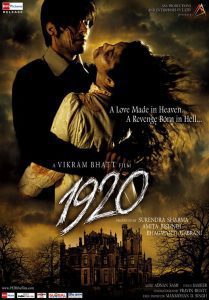 Apparently the highest grossing Bollywood horror, 1920 is an absolute epic. I’ve only seen one Indian horror so far (the cheap-in-comparison Horror Story), and 1920 couldn’t be more different.

This is the story of a young architect who moves to an old stately home to measure it up and redesign it as a hotel. He takes his beautiful wife, who feels a little uneasy there and – after many weird and supernatural events – becomes possessed.

Apparently, 1920 was loosely inspired by The Exorcist, though there are some classic Bollywood elements: it is a romance at heart, with betrayal, seduction, and a flamboyant dance in the middle. But underneath all that, 1920 is also very much about the conflict between Indian and Western religions, and between British and Indian society; hence being set at that time, when the British reign was loosening.

The film includes many horror tropes and cliches that are familiar from Western films (indeed some near identical scenes); and in terms of plot, it’s a bit of a muddle. But 1920 is beautifully made, and shows that Indian cinema can make a large scale horror film well, blending Western influences with its own Bollywood style. I found the film entertaining; but more than that, found it fascinating. 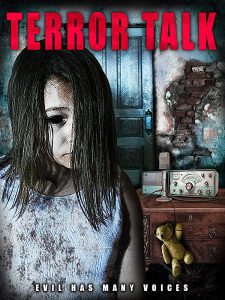 Interesting little single-location indie horror. Following an unidentified civic emergency, a young man holds up inside with just his CB radio and paranoia to keep him company. It’s a story of madness taking hold, in the form of ghosts.

Terror Talk is cheaply made, but for the most part, that’s not an issue: the set is what it is, though the ghost effects could have been a little more effective. My main issues are with the main character, Kenny; and the main actor, Sean Michael Gloria: yeah, major… sorry about that. Kenny is described in the Amazon Prime blurb as a “doomsday prepper”, but he’s not a convincing one to me: he’s not prepared; we don’t even see the cliched rows of tinned foods. If I had to stay indoors after an emergency, I would much rather be John Goodman’s Howard from 10 Cloverfield Lane. Gloria’s acting was a little patchy, unfortunately: the writing of his character is believable, but he couldn’t quite deliver the range required.

The Jalbert brothers show plenty of potential here in Terror Talk; though I think that potential is a little underdeveloped for them to be tutoring beginners. 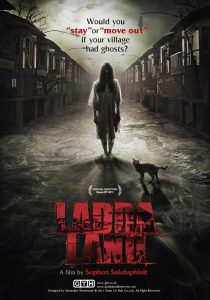 Ladda Land is the first Thai horror film I’ve watched this season; though I have been following the Thai drama The Judgement recently. Although both are great quality, they are utterly different in terms of style.

Ladda Land is about a family who moves to a new house in a smart suburban development; only to find that the atmosphere is uneasy there, with neighbours acting violently, out of the blue. Gradually it becomes apparent that there are ghosts (largely of deceased residents) in Ladda Land; though whether they are the cause of the strange behaviours or the result of it is unclear.

It hardly matters though: as with many films I’ve covered, the story is just one layer of the film. The ghost story is an allegory for capitalism gone wrong, almost like a horror equivalent of Falling Down. The allegory and the story both work, though; and both layers are painfully poignant at times. I liked the characters most – they were well-drawn and very sympathetic – but as well as that, the film was gripping, and the CGI ghost effects were proper creepy. I can picture the ending still: Ladda Land is one of this season’s true recommendations. 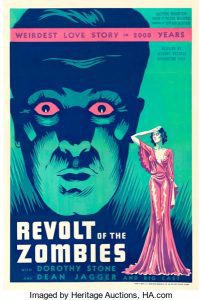 Revolt of the Zombies (1936, USA), directed by Victor Halperin

Sorry, but I don’t know why he bothered. Halperin apparently intended Revolt of the Zombies to be a follow-up to White Zombie, but it was a hopeless effort. Not only was it more of a doomed love-triangle story than a horror, but he felt the need to copy Bela Lugosi’s eyes from White Zombie for a creepy special effect, though Lugosi wasn’t in this second film.

The “zombies” of the title were men under the influence of a mind-control formula, which could have been scary in a better plot. And it wasn’t just the plot that was poor: the acting was almost can’t-be-arsed level.

Oh well: I thought I should look for an older title to broaden my cross-section of horror films, and in my haste picked a rubbish one. 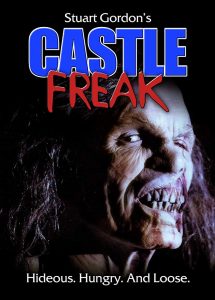 Loosely based on The Outsider by H P Lovecraft, this was another film by the director of Re-animator, also loosely based on a Lovecraft story. I’ve not seen Re-animator yet, though I understand that one is as much comedy as horror, which Castle Freak is not; though it does feature two key cast members from that earlier film: Barbara Crampton (again!) and Jeffrey Combs.

Castle Freak was a straight-to-video film, and I’d not heard of it until I watched The 50 Best Horror Movies You’ve Never Seen and found it recommended there. So I got myself a trial week on Amazon’s Full Moon channel and was pleasantly surprised… Castle Freak was like an 18 cert Scooby Doo story! A spooky castle, a mystery, a hidden baddie… though the acting was excellent and the plot well constructed, all within the bounds of a melodramatic script. I liked it a lot, and I’ll happily watch more from Gordon as a result.