Manifest continues to be intriguing, but “Re-entry” still hasn’t done much to convince me that the show has anything new to offer.

Manifest continues to be intriguing, but “Re-entry” still hasn’t done much to convince me that the show has anything new to offer.

I suppose it makes sense that if your passenger plane disappears for five-and-a-half years, you’re going to emerge on the other side with a lot of baggage. That’s the theme of Manifest in “Re-entry”, as the ill-fated passengers of Flight 828 attempt to rearrange the pieces of their lives after an inexplicable event that may have set a skulking smoke monster on their trails.

After being detained, the passengers were eventually let go thanks mostly to Michaela (Melissa Roxburgh), who wants to return to her job at the NYPD but has to be subjected to a psychological evaluation in the meantime. Ben (Josh Dallas) is hearing music that leads him to Radd (Curtiss Cook), another passenger whose son is now behind bars for robbing a jewellery store. Later in “Re-entry”, that same music leads Ben to the real culprit of that crime, the store owner’s son, allowing him to conveniently crack the case.

That notion of convenience is discussed in “Re-entry”, both between Ben and Michaela, who are still trying to put together what happened and is continuing to happen to them, and between Ben and Grace (Athena Karkanis), who is having trouble allowing Ben back into their life after living so much of it without him. 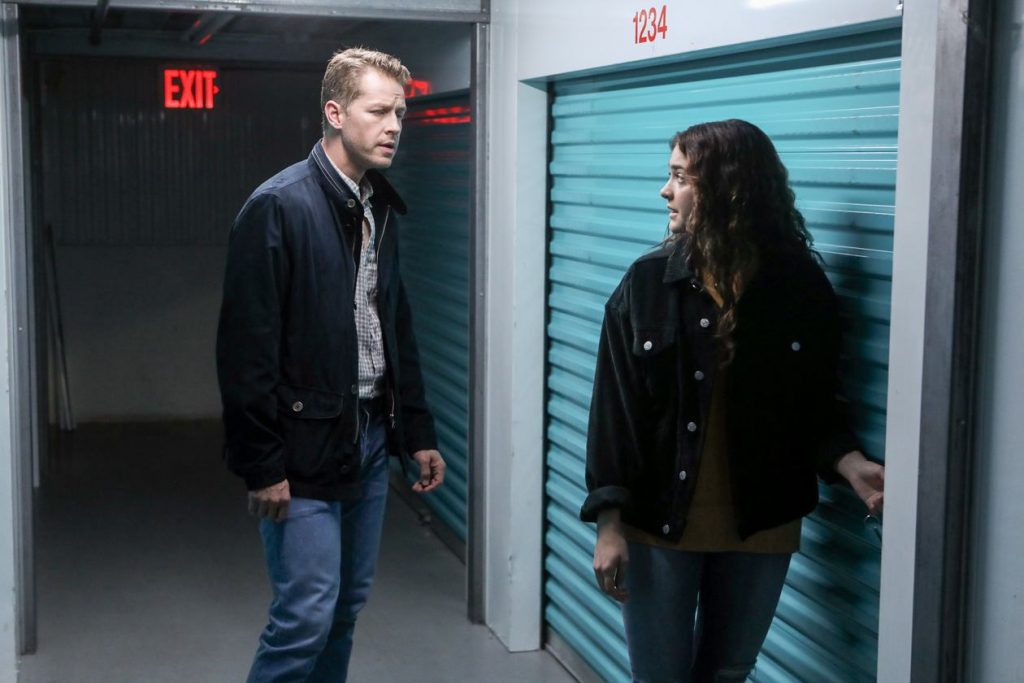 Cal (Jack Messina) is grappling with that loss of connection to Grace and his twin, Olive (Luna Blaise), even though the latter had the good sense to redirect Cal’s possessions to a storage unit when Grace tried to dispose of them and move on – the idea of twins having some nebulous connection isn’t a new one, but it’s intriguing in Manifest because of the implication that it might be more than just an innate, innocuous sixth sense; especially when a smudgy, smoky figure in one of Cal’s drawings turns up at the end of “Re-entry” to murder one of the passengers who ignored the Feds’ insistence that the survivors of Flight 828 not talk to the press.

Again, this is intriguing, but I found myself not really giving a s**t about that women seeing as Manifest hadn’t really given us a reason to. I appreciate that the show is focusing a core group of characters rather than trying to spread things about too much and imitate Lost too nakedly, but it isn’t above introducing a smoke monster, so the comparisons are likely to be made regardless. I don’t dislike the show, but currently I’m not particularly engaged by it. There’s some nice character drama here, but Manifest’s broader mysteries only seem to be furthered in cliffhangers, leaving the bulk of the first two episodes feeling a little padded and reiterative. Going forwards I’d like to see a better balance between character and plot, and some (even small) answers provided before the questions mount up. But we’re watching, and we’re talking about what we’re watching, so in that sense Manifest is doing its job.