This week’s episode of The Good Place sees Trevor (Adam Scott) come to Earth to try and break apart the group. It’s down to Michael, Janet and the Australian librarian to try and save the day.

This week’s episode of The Good Place sees Trevor (Adam Scott) come to Earth to try and break apart the group. It’s down to Michael, Janet and the Australian librarian to try and save the day.

As I watched episode 2, “The Brainy Bunch”, I realised that The Good Place has quickly established itself as one of my favourite sitcoms. Actually no, one of my favourite TV shows. What is interesting is that despite it being a comedy show I never have more than two or three big laughs per episode, but I do spend the majority of the runtime with a big smile plastered on my face. It’s just a pleasure to be in the company of Eleanor, Chidi, Jason, Tahani, Michael, Janet, and pretty much any other side character that they have chosen to introduce.

This week’s episode, “The Brainy Bunch”, pays off the cliffhanger of last week with Adam Scott’s horrible, but hilarious, demon Trevor inserting his way into the research to try and break them up and damn them to a fiery eternity in The Bad Place. Adam Scott is a very funny and likeable guy and his character, Ben Wyatt, on Parks and Rec is the kind of loveable nerd that is fun to laugh at but secretly I would relish the opportunity to hang out with. Trevor hasn’t appeared in too many episodes of The Good Place but he has been wonderfully irritating in all of them and this week is a particularly high watermark.

The aim of Trevor’s plan is to infiltrate the group and try and break them up. If the gang can stay together they’re more likely to become good people and ultimately end up in The Good Place. The plan seems to involve being a composite of all of the most annoying co-workers that you’ve ever had as he relentlessly sends Eleanor ‘dank memes’ and takes them all out to a dreadful chain restaurant. “The Brainy Bunch” is a great episode. 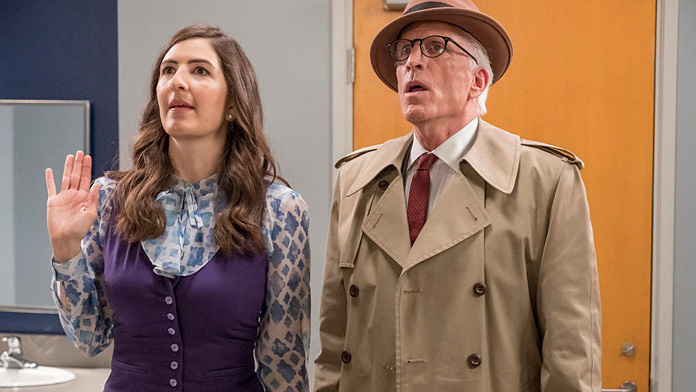 I think that Janet (D’Arcy Carden) has been consistently one of my favourites in a show that is a sea of ‘favourite characters’. Up until now, she’s been used fairly sparingly and I was slightly worried that might be why she works so well. In “The Brainy Bunch”, she’s finally moved to a more central role and thankfully she’s still as funny as ever. A highlight this week was Janet attempting to summon things on Earth, only for her ‘print queue’ to finally complete the requests when she got back to The Good Place.

Although I’ve singled people out, everyone is pretty much flawless. Ted Danson continues to delight as Michael and I love the attempt at an Australian accent. I can only assume that he genuinely can’t do accents and so they decided to run with that as a recurring joke for the season. The one negative is that the increased focus on the supporting cast means we’re getting a lot less Eleanor, Chidi, Jason and Tahani. Although I did enjoy hearing about Tahani’s trip to Ryan Reynolds’ macrobiotic farm, this week.

I’m really enjoying the new direction of The Good Place, I was slightly concerned about how it would play out but it seems like I had nothing to worry about. The Good Place is a series that has felt fresh and funny in its first two seasons and the third season hasn’t rested on its laurels. It’s kept pushing things forwards and kept evolving. It’s wonderful.