Tonally jumbled, an abundance of plot contrivances, and a strange lead performance make Venom far from a symbiotic experience. Especially for today’s viewers accustomed to the consistently top-quality superhero stories from the MCU.

Tonally jumbled, an abundance of plot contrivances, and a strange lead performance make Venom far from a symbiotic experience. Especially for today’s viewers accustomed to the consistently top-quality superhero stories from the MCU.

The long-gestating Venom standalone film finally sees the light of day this weekend, and considering the extent to which superhero films have evolved over the last decade, the film is in a very crowded and competitive landscape. With the Marvel Cinematic Universe churning out endless high quality stories, the bar has never been higher for fledgling origin stories that are not explicitly connected to the MCU world. For Venom to thrive, it is essential that the story find a new angle to explore, and the idea of a protagonist with villainous tendencies could have fit the bill. Although the film does admittedly run with this approach, Venom is ultimately a failure due to how poorly constructed the film is, leaving one with the question “Why was this made?”

Despite being a classic comic book character who originated from serving as an antagonist for Spider-Man, Venom commences its story with no sight of the web-slinger and introduces us instead to idealistic journalist Eddie Brock (Tom Hardy). Between his soon to be fiancé Anne (Michelle Williams), his thriving career as a reporter, and his upscale San Francisco apartment, Eddie presently seems to have it all. Eddie’s life takes a turn though when tasked with interviewing Carlton Drake (Riz Ahmed), the CEO of the bioengineering company the Life Foundation. After refusing to back down from inquiring about rumoured unethical experiments related to alien life forms, Eddie is promptly fired from his job and manages to ruin his relationship with Anne in the process.

Fast forward 6 months to a now down on his luck Eddie, who is adrift with his life until a sudden meeting with an employee from the Life Foundation, Dr. Dora Skirth (Jenny Slate). Dr. Skirth quickly validates Eddie’s accusations against Drake and requests his help in acquiring proof to put a stop to the dangerous experiments. Upon agreeing to help and gaining access to the lab, Eddie is inadvertently exposed to an alien symbiote that quickly attempts to take over his body. Eddie soon experiences an alien presence by the name of “Venom” communicating with his mind and finds that his body will sporadically change into a monstrous creature when in danger. Drake, desiring to recapture the stolen symbiote to help with his misguided plan for “saving” the world, tasks his forces to find Brock and procure the symbiote. Eddie must fight to come to an understanding with this newfound alien parasite in order to put a stop to Drake’s insidious plans. 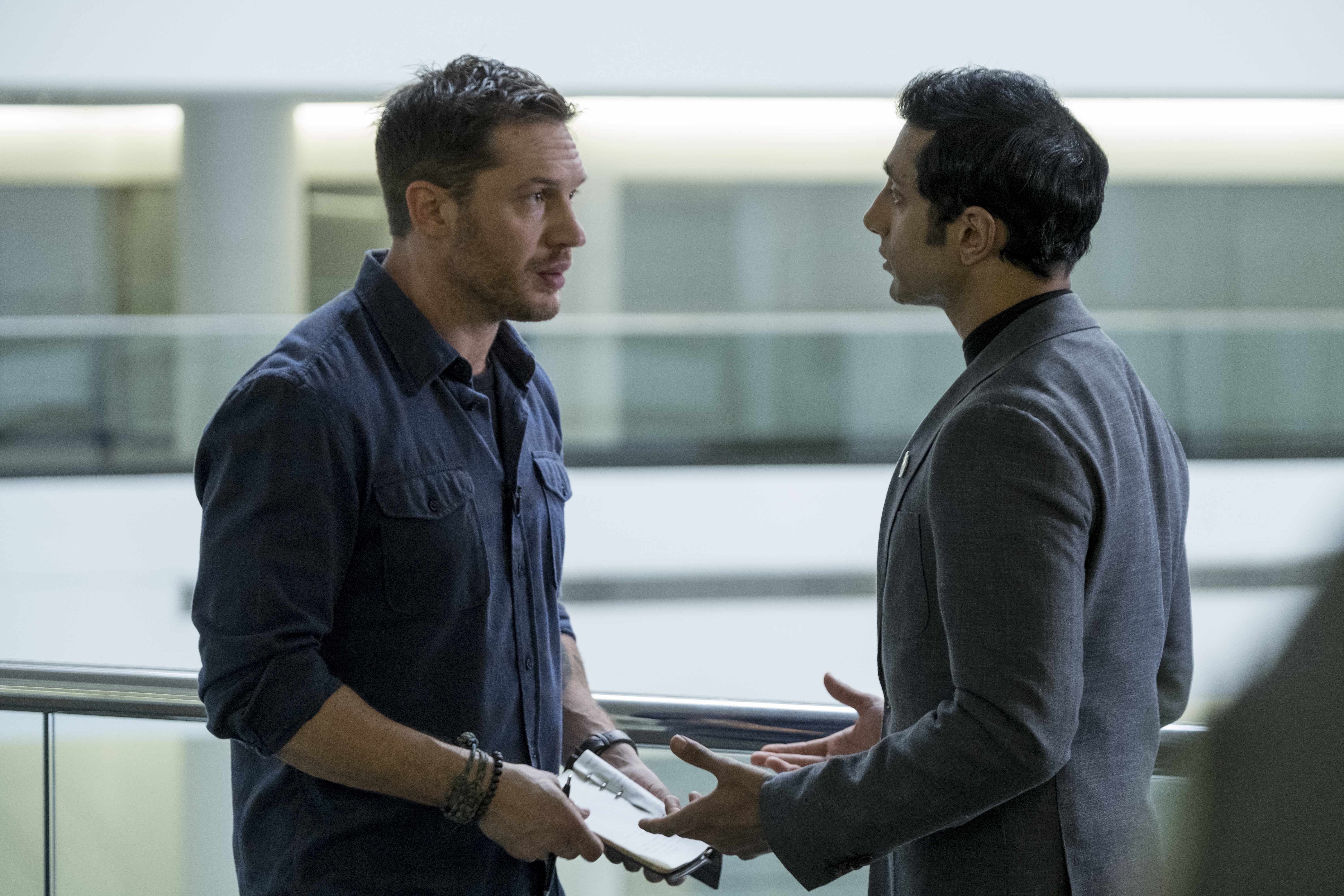 For all the misgivings fans had about the film not receiving an R-rating, Venom mostly succeeds at providing a protagonist with more of a violent edge. Although the R-rating wouldn’t have hurt, the vicious depiction of the manner in which Venom deals with his enemies allowed the character to comfortably sit somewhere between hero and villain. The twisted relationship between Eddie and his symbiote was also surprisingly endearing, as it was a novel concept to make a fiendish alien parasite more akin to a loyal pet not wanting to leave his owner. The symbiote’s violent urging for Eddie to commit savage acts such as eating the heads of their opponents also provided the film with its best darkly comedic moments.

Unfortunately, the rest of the film is a poorly constructed mess. Copious plot contrivances, pacing issues, and a lack of tonal identity all plague the film throughout. The film is never set in what it is aiming for as it oscillates between sci-fi horror, comedy, and action spectacle with none of these angles successfully landing. Tom Hardy’s take on the intrepid reporter also works to the film’s detriment as his puzzling accent and the cringe-worthy dialogue he is tasked with immensely distracts from the story. Coupled with the abysmal character development of Eddie Brock, we are stuck following a character who is more of an irritant rather than a compelling character.

Additionally, despite having numerous models of successful superhero films to follow, Venom succumbs to the most common pitfalls of the genre. The bland characterization of Carlton Drake brings us yet another mad scientist antagonist with no qualms of crossing ethical lines that we have seen populate almost every superhero story. Overly-reliant CGI battle sequences also do little to help Venom as the action scenes are a chore to get through and, in all honesty, made me nostalgic for the treatment of the titular character from the climax of Sam Raimi’s Spider-Man 3 (a phrase I thought I’d never utter).

Perhaps more than a decade ago Venom could have gotten by solely on the novelty of adapting a beloved character from the comics onto the big screen. Thanks to the MCU though, those days are over and anything less than an exceptional adaptation just won’t cut it. Much like the concept of the symbiote struggling to bond with its host, the components of Venom struggle throughout to form a cohesive whole, but it never successfully comes together. What remains is one of the stranger attempts at igniting a franchise tentpole in recent memory.