Home » Film » ‘The Witch in the Window’ | Grimmfest Film Review

‘The Witch in the Window’ | Grimmfest Film Review

Simon and his son, Finn, go to spend a few weeks doing up an old house, where they encounter its previous owner, Lydia (deceased).

Simon and his son, Finn, go to spend a few weeks doing up an old house, where they encounter its previous owner, Lydia (deceased).

The Witch in the Window is – as you might guess – a haunted house story. It’s a simple tale, on the surface, with two main characters, three secondary characters, and one primary location: the house. I realise I may not be selling it here, but that simplicity allows the story to develop and show some depth, along with the characters that it belongs to.

The characters form the heart of the story: Simon (Alex Draper) has a very strained relationship with his twelve-year-old son Finn (Charlie Tacker), largely because he’s separated from the boy’s mother Beverley (Arija Bareikis); and he really wants to make improvements with both of them. Mind you, her relationship with the boy isn’t great, either: he’s been discovering things on the Internet even adolescents shouldn’t be interested in; which I’m sure she would support him with if only everything wasn’t getting on top of her. Most of the film is centred on just Simon and Finn, working on the house and making the most of the time together; indeed, there are some engaging domestic scenes which would be right at home (excuse my pun) in a Spielberg film.

Together, father and son hear about the previous resident, Lydia (Carol Stanzione) who apparently died in her armchair facing an upstairs window. Together, they meet the “witch in the window” and keep working on the house… unfortunately, that only makes her presence stronger, which was subtle at first but gradually becomes downright sinister. 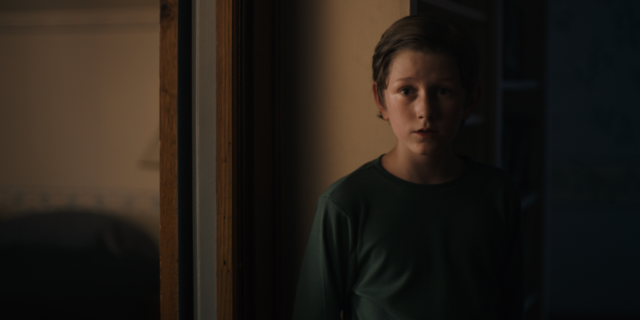 Draper and Tacker who played father and son in The Witch in the Window were such excellent actors (and so well cast) they could have been father and son for real. All of the characters were beautifully and carefully written – not much detail, but finely chosen dialogue to give just the right amount – even the smaller roles. I’m almost certain to seek out the other films written by Andy Mitton, We Go On and YellowBrickRoad.

Mitton directed The Witch in the Window (and those earlier ones) too, and he did so with a similar style to Justin Benson and Aaron Moorhead. He was very patient to establish both the people and the setting at the heart of the film, so that when things do take a turn for the unexpected, everything still fits together well, despite an absence of clues for what may come. 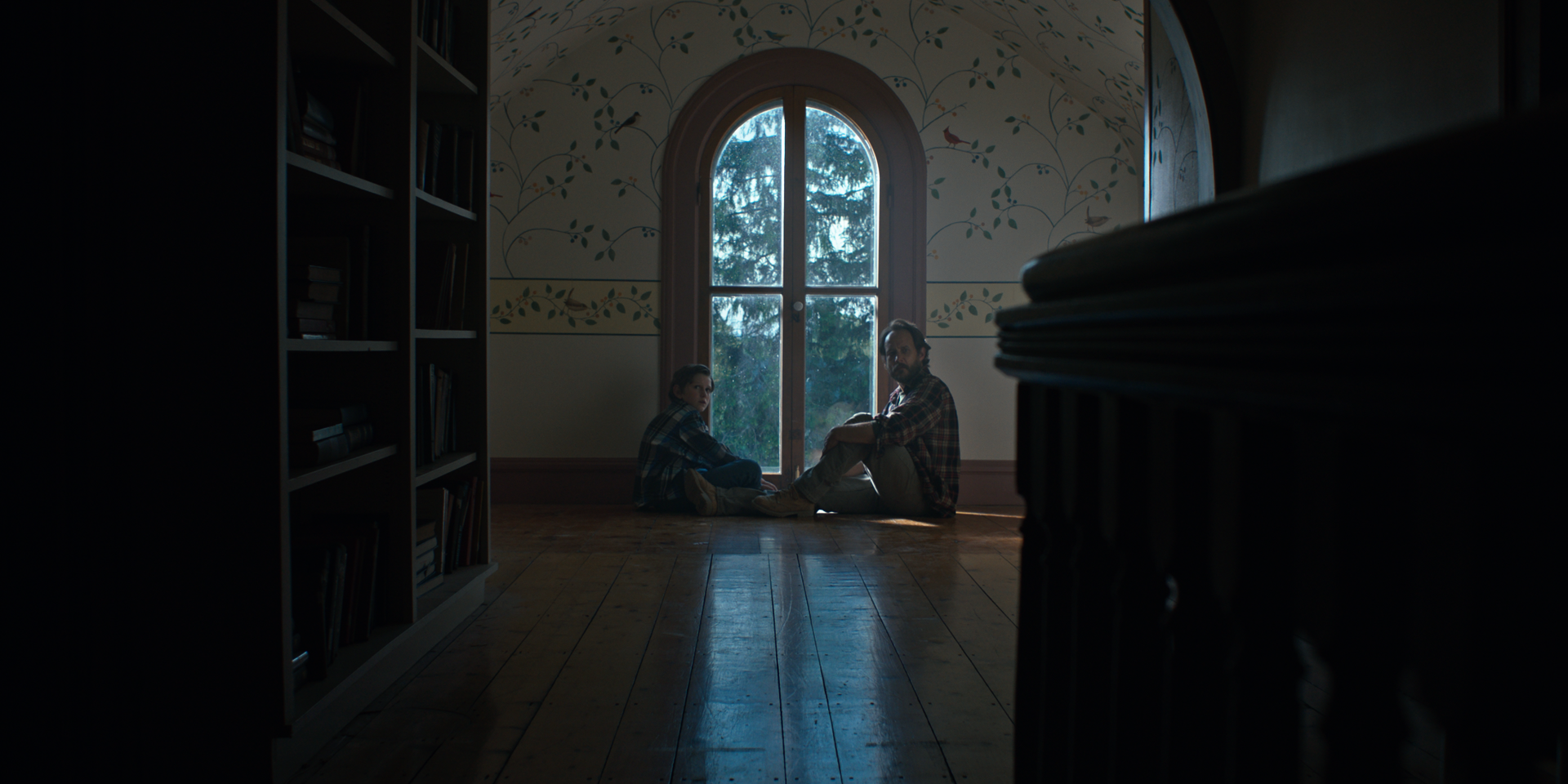 I have to confess, at times I found the first half a little too slow: please be prepared to be patient along with the writing, though, as it really does pay off, and makes good sense too. These are real people, and no-one – especially accompanied by a twelve-year-old sulk – renovates a run-down house in the country over a weekend. Oh that house in the country: this was not a clichéd haunted house with exaggerated creaks and spooky mirrors (a la The Secret of Marrowbone); it was much more believable. In fact, the place and the “witch” both reminded me of the book “Hex” by Thomas Olde Heuvelt.

Grimmfest was both wise and lucky to show this film in its tenth-anniversary programme: The Witch in the Window is great quality and a lovely contrast to other more hectic or violent films. This one is creepy and emotionally tender, especially for parents. I’d recommend it to anyone who enjoyed Henry Hobson’s Maggie, or Benson and Moorhead’s The Endless. And I’m definitely going to watch it again when it arrives on Shudder.