Some downtrodden characters attempt to break free, with mixed results, in a solid mid-season episode.

Some downtrodden characters attempt to break free, with mixed results, in a solid mid-season episode.

Lori’s fate is becoming more tenuous, we learn during this week’s cold open. Kiki Rains, the agent Lori met with last week, has approached C.C. about a deal to represent Lori. His response should not come as a surprise to anyone, as he leaves Lori crying and bleeding. He attempts to Ike Turner the situation with some gifts, including a puppy Lori clearly doesn’t want. The gesture comes off as hollow, another way to tie her to him even as she is clearly drifting further and further away. Can we get Lori and Abby together in a room? That’s a conversation that needs to happen. Candy attempts to talk to Lori about breaking free of C.C. Rarely do we see Lori drop her cool-girl facade. From the beginning of the show, she’s been savvy about the way her world works. Here we finally see her break down in “All You’ll Be Eating is Cannibals”. It’s enough to cinch her casting as Little Red.

Lori aside, Candy must deal with the pesky issue of a wolf-centred script that doesn’t focus on its female title character. In order to do this, she needs to bring in a female writer, at a cost. Her attempt to hustle Vincent doesn’t pan out, but he sends her to go after Frankie, who is a little more financially solvent after selling his dry cleaning business back to its original owner. The hustle here is clever: she essentially makes a bet with him. If anything, Frankie is a gambler, and being a movie producer is a new type of risk. By episode’s end, we get to see Candy yell action on her opus, Red Hot.

It is a week of challenges, from Paul challenging the zoning board to Darlene refusing to comply with a john’s wish that she watch herself in p**n while they have sex. Even Alston challenges the status quo with a brothel raid. Alston has been a ghost for much of this season–I miss his grizzled optimism. Both he and Ralph Macchio are wasted in their current marginalized rolls. 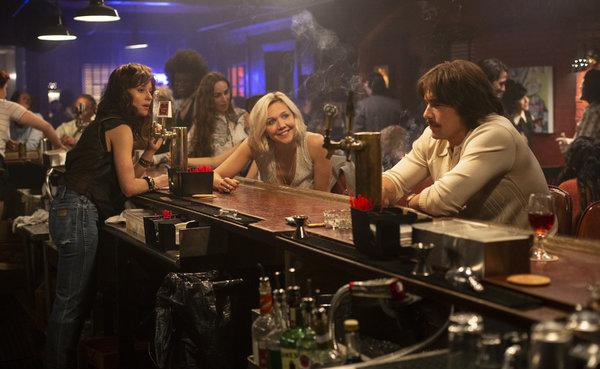 Perhaps the greatest challenges, however, come from Ashley and Abby. The first comes when Ashley, Dave, and Abby visit the streets to help the local working girls. C.C. tries to intimidate Ashley, noting that he has the power to return her to the girl we saw in episode one: terrified, compliant, and beaten. But she refuses to back down. His face, when she says she wants to see him varied, shows an insecurity we haven’t seen before.

But it is Abby who pushing back the hardest in “All You’ll Be Eating is Cannibals”, finally holding Vince accountable by asking he ban Bobby from the bar for Kitty’s death and demanding to know just how much he’s connected to the mob and brothels. Vincent has at times seemed one of the more progressive men on the show, particularly when it comes to his relationship with Abby. Yet he evades her questions, not directly lying, but sidestepping the truth with just enough finesse to be credible. In the end, he refuses to ban Bobby. And Abby, in a move that has been coming for weeks, walks away from Vince and their life together.