“Winner”, the final episode of Better Call Saul‘s fourth season, has everyone making some tough decisions that are going to have far-reaching consequences.

“Winner”, the final episode of Better Call Saul‘s fourth season, has everyone making some tough decisions that are going to have far-reaching consequences.

Ever since it started, Better Call Saul has been a masterclass in how to deliver fantastic television with great writing and superb performances. It has never relied on huge set pieces to generate genuine intrigue or suspense. The fourth season finale, “Winner”, is absolutely no exception. There is no epic shootout, no big bad coming out from behind a curtain, and no revelations appearing from out of the blue. This episode was the perfect crescendo to a brilliant season of television, with plenty of payoffs in the form of well-worked character moments that had been truly earned.

Michael finally manages to sort out his problem with a runaway German (which now that I think about it would be an excellent sequel to Runaway Bride). With the use of some fairly clever social engineering Michael is able to figure out where Wermer has gone and finally track him down. I think there was only going to be one outcome once you disobey Gus Fring, and so I had a feeling that Werner’s days were numbered. I just didn’t expect the way it was handled to be so upsetting. There’s a sad acceptance once Werner realises the inevitable is about to happen and he’s forced to send his wife away to protect her. It’s a trope we’ve seen a hundred times before, like Arya throwing stones at her direwolf to protect her in the long run. Werner’s last interaction with his wife was him shouting at her and telling her that he didn’t want to see her. It was achingly played by Rainer Bock as he finally realises what he needs to do.

The thing that I half expected but also hoped wouldn’t happen was that Michael took responsibility for cleaning up his mess; he was the one to pull the trigger. It felt like a watershed moment for the character. As much as the series has been geared towards showing us Jimmy’s fall (or maybe rise) to his Saul Goodman persona I’ve always wondered what pushed Michael over the edge to become Gus’ top guy. The scene between Michael and Werner was brilliantly done; you can feel the resignation in both of them as they slowly and simultaneously accept their fate.

The episode finally shows us what turned Jimmy into the Saul Goodman we know and love. The series has hinted at the transformation over the course of its run to date. We’ve had the wardrobe with a rainbow of shirts, we’ve seen the name ‘Saul Goodman’ creeping in here and there and we’ve seen just how much Jimmy likes to bend the law. 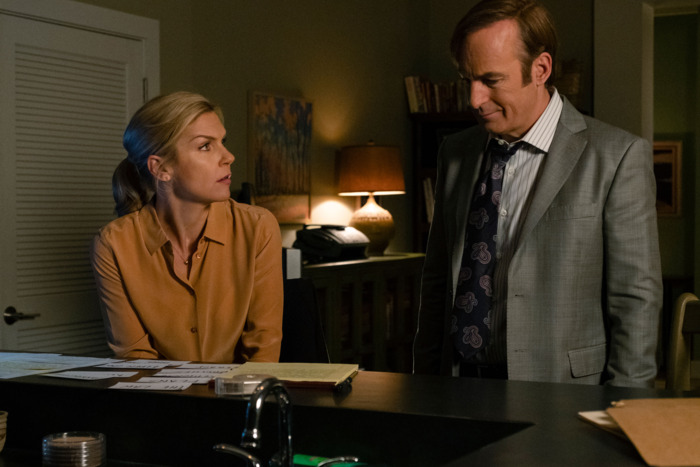 “Winner” saw Jimmy get one last shot at getting his license back on appeal and it seemed he might have actually turned a corner. He gave what seemed like a heartfelt and impassioned speech about what Chuck meant to him and what he’d learned since he lost him. I thought that Jimmy had finally started to accept what had happened, that maybe he had one more season of hope left before he properly embraced his less than scrupulous persona. It turns out that I was fooled, just like everybody else. The whole thing had been an act, a scam, a con that was designed to pull at the heartstrings and manipulate the hearing to do exactly what he wanted.

I think that this is the final nail in the coffin of Jimmy and Kim’s relationship. She looked absolutely devastated when he revealed that he’d been playing everyone all along, that it was just an act to convince the rubes to give him what he wanted. At that moment I saw a familiar face; Jimmy seemed to cease to exist and that was unquestionably Saul Goodman. The look on Kim’s face said it all really, she didn’t really know the man who was stood in front of her and I don’t think they’ll last the test of time.

It was a lowkey but high stakes end to a great season of television. I’m already counting down the days until it’s back on our screens. It’s certainly going to be a long wait. I’ll be ready and waiting to see Jimmy – sorry, Saul’s descent into the underworld.