Greg (Aaron Eckhart) and his horrible girlfriend Sophie (Louise Bourgoin) are desperate to get their hands on Greg’s Aunt Anushka’s (Marthe Keller) apartment in Paris. However, things don’t go entirely to plan when Anushka’s new carer Hajar (Inés Melab) appears on the scene.

Greg (Aaron Eckhart) and his horrible girlfriend Sophie (Louise Bourgoin) are desperate to get their hands on Greg’s Aunt Anushka’s (Marthe Keller) apartment in Paris. However, things don’t go entirely to plan when Anushka’s new carer Hajar (Inés Melab) appears on the scene.

I was very excited to see that The Romanoffs was heading to Amazon Prime –  after all, the show-runner, Matthew Weiner, was responsible for Mad Men and was a writer on The Sopranos. When it comes to television that is an impressive CV by itself. His latest series is something quite different. The Romanoffs is a new Amazon Prime original; an anthology series that looks at the lives of different people around the world who claim to be related to the ill-fated Russian Royal Family.

Given Matthew Weiner’s previous work I was expecting The Romanoffs to be beautifully produced and I certainly wasn’t let down on that front. The design of everything is wonderful; the characters, the clothes they wear and the places they live have all been created with a loving attention to detail. It’s everything that I would have expected from the man behind Mad Men.

The biggest shame with “The Violet Hour”, the first episode of The Romanoffs, is that the characters and storyline weren’t created with such care and attention. I found it incredibly difficult to care about any of the characters in the episode, and it’s a real shame given that it’s a talented cast. Everyone seems to conform to a cliche and I had a fairly decent idea what was going to happen within the first 10 minutes. For example, when we’re first introduced to Anushka she is very much a grumpy and difficult old woman. Yes, we’ve seen that character a lot before. When Hajar is appointed to help her out there’s a little bit of casual racism and a lot of distrust, but over time Anushka actually bonds with Hajar and they build a level of respect and friendship. Who would have thought it?

That in itself is fine, actually; there’s only a finite amount of characters and stories, so not everything has to be staggeringly original. But you can’t even see the relationship develop over time. One minute she hates her, then Hajar is pulling her dog out of a lake and before you know it Anushka has left the apartment to Hajar in her will. I want to mention at this point that the dog, Alexei, apparently can’t swim, but at the first opportunity to escape he hurled himself into a lake. I think poor Alexei was so bored at having to be in The Romanoffs that he’s trying to escape his cruel reality however he can. And I don’t blame him. 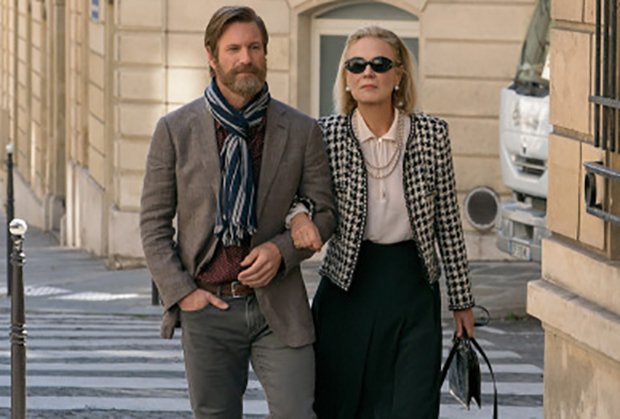 Aaron Eckhart is pretty much playing Aaron Eckhart but with one significant difference: he can speak French. He is, of course, a sexy chap who uses his dimpled chin and wonderful hair to seduce Hajar into refusing to be on Anushka’s will. This seems to be a solid plan until the final act of “The Violet Hour” when it’s revealed he got Hajar pregnant. Just when you wonder how it will be resolved it turns out they inexplicably love each other despite not really knowing each other. That’s actually unfair – they shared an olive pizza and he pushed her up some stairs once, so that’s a solid foundation for bringing a child into the world.

This story didn’t really have much of connection to the Russian Royal Family beyond Anushka saying she was related to them, and she just happens to have a Faberge egg lying around on her dresser. After all, a Faberge egg is the most Russian thing you can own. I’m surprised they didn’t have Aaron Eckhart doing a Cossack dance while drinking vodka and wearing a bearskin hat to really hammer the message home.

The first episode of The Romanoffs is a curious thing. It feels really long (at just under 90 minutes) but nothing actually seems to happen. Characters just say things and then move on. It’s quite nice to look at but ultimately it’s very boring and I didn’t like any of the characters really – not that I could remember their names from one scene to the next. I’m hoping that the other episodes are a bit better but I guess we’ll just have to see.