This week The Good Place sees The Brainy Bunch coming towards the end of their study group, despite the best efforts of Michael and Janet. Will they manage to still be good people even if the group goes their separate ways?

This week The Good Place sees The Brainy Bunch coming towards the end of their study group, despite the best efforts of Michael and Janet. Will they manage to still be good people even if the group goes their separate ways?

The latest episode of The Good Place, “The Snowplow”, isn’t quite as extreme but it is equally effective. This episode picks up the action a year later after the gang are well into the study and are showing signs of real improvement. Michael and Janet take it upon themselves (well mainly Michael) to do everything in their (considerable) powers to ensure there are no obstacles to the groups’ progress to the real Good Place.

When Eleanor is about to run out of money and needs to get a job Michael and Janet manage to find her a winning scratch card to give her $18,000 to stay in Australia. When she shares the news of her winnings with the group Chidi is understandably pleased and Tahani offers her commiserations – it’s a perfectly played scene that tells you everything about the dynamics of the group but is also very funny. 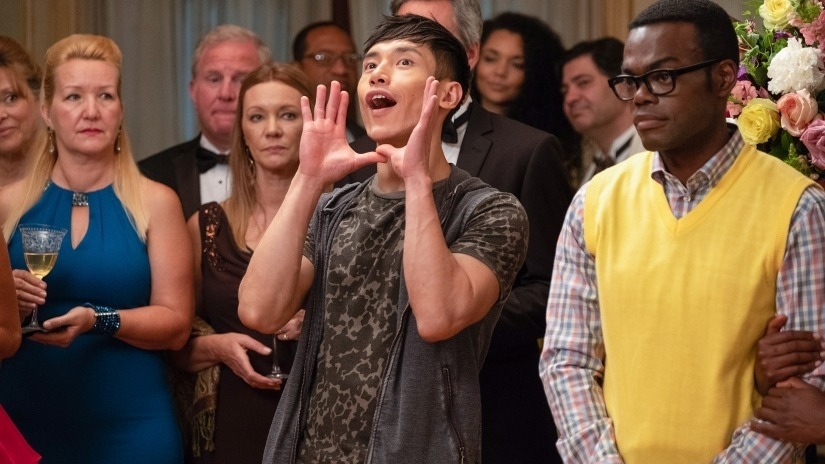 Tahani is slowly being drawn back towards Jason (she wants to “smash” him) so again Michael and Janet step in; there are no scratch cards involved here though. Instead, they manage to play Cupid and reconnect Tahani with an ex-boyfriend: the long-forgotten Hemsworth brother, Larry. Larry is a chiselled surgeon who is always saving the lives of children but he feels, perhaps understandably, overshadowed by his siblings. It’s a fairly predictable joke but it is played brilliantly by Barry Lawson. He’s wonderfully defensive whenever there’s even the slightest chance that someone could be talking about his brothers – I’m hoping we see him again.

I think Ted Danson has really grown into his role this season; he was great fun when he was playing an out and out demon last season but he’s definitely on more familiar ground now. Michael is a timeless demon who has seen civilisations rise and fall but now Chidi, Eleanor, Tahani and Jason are the only things in the universe that he cares about. It’s an absolute delight to see him slowly come to terms with humans and life on Earth and it’s a role that’s letting him really draw on his warm, affable charms. I think I’d very much like to hang out with Ted Danson, should the chance ever present itself. In fact, Ted if you’re reading this, drop me a line ok?

The episode ends with something of a critical moment – Janet and Michael have come up with a crazy plan (well, again, it was mainly Michael) to break into the Judge’s office and reset the timeline on Earth. Just as they’re about to go through the portal Chidi, Eleanor, Tahani and Jason stroll in and are understandably a little perturbed. I’m not sure how they can dig their way out of that one without coming clean but it’ll be interesting to watch them try.