First Man’s refusal to stray from hyper-focusing on the psyche of Neil Armstrong may be divisive for some viewers. However, director Damien Chazelle has created another captivating portrait of the pursuit of greatness and the nuances of what can drive this.

First Man’s refusal to stray from hyper-focusing on the psyche of Neil Armstrong may be divisive for some viewers. However, director Damien Chazelle has created another captivating portrait of the pursuit of greatness and the nuances of what can drive this.

Biopics can be remarkably challenging to create, as there is often implicit pressure to respectfully portray a monumental event or individual without becoming overly hung up on historical details. The key to their effectiveness is to present the historical figure in a relatable human manner that will hopefully provide a new and compelling perspective. Director Damien Chazelle, coming off of his last two award winning films (Whiplash and La La Land) which explored the pursuit of personal ambitions, proves to be the perfect match to flesh out astronaut Neil Armstrong’s path to accomplishing the extraordinary feat of being the first man to walk on the Moon.

First Man starts by taking us to the year 1961, where we find Neil Armstrong (Ryan Gosling) working as a test pilot in California. Armstrong is shown to be a soft-spoken and skilled engineer, however, he is distracted due to the emotional journey he and his wife, Janet (Claire Foy), are on as they watch their two-year-old daughter Karen endure treatment for a malignant brain tumor. Despite aggressively treating the disease and Armstrong personally consulting with multiple doctors at every level, Karen inevitably succumbs to her illness and dies.

In the wake of this tragedy, Armstrong is propelled to immediately apply to work with NASA and become an astronaut for Project Gemini. When questioned during the interview process about why he is intent on traveling to space, Neil explains that he wants to see the world from a different perspective and is not motivated by exploration for the sake of exploration. This retort on a literal level applies perfectly to the aspirations for the United States to arrive at more technological advancements through this feat, however, the statement is more layered and actually helps to demonstrate the soul of the film. Interestingly, this line is almost meta, as it cues the audience into the intentions of First Man and what Chazelle and writer Josh Singer (Spotlight, The Post) are aiming for by tackling a more introspective angle on the Apollo 11 mission. 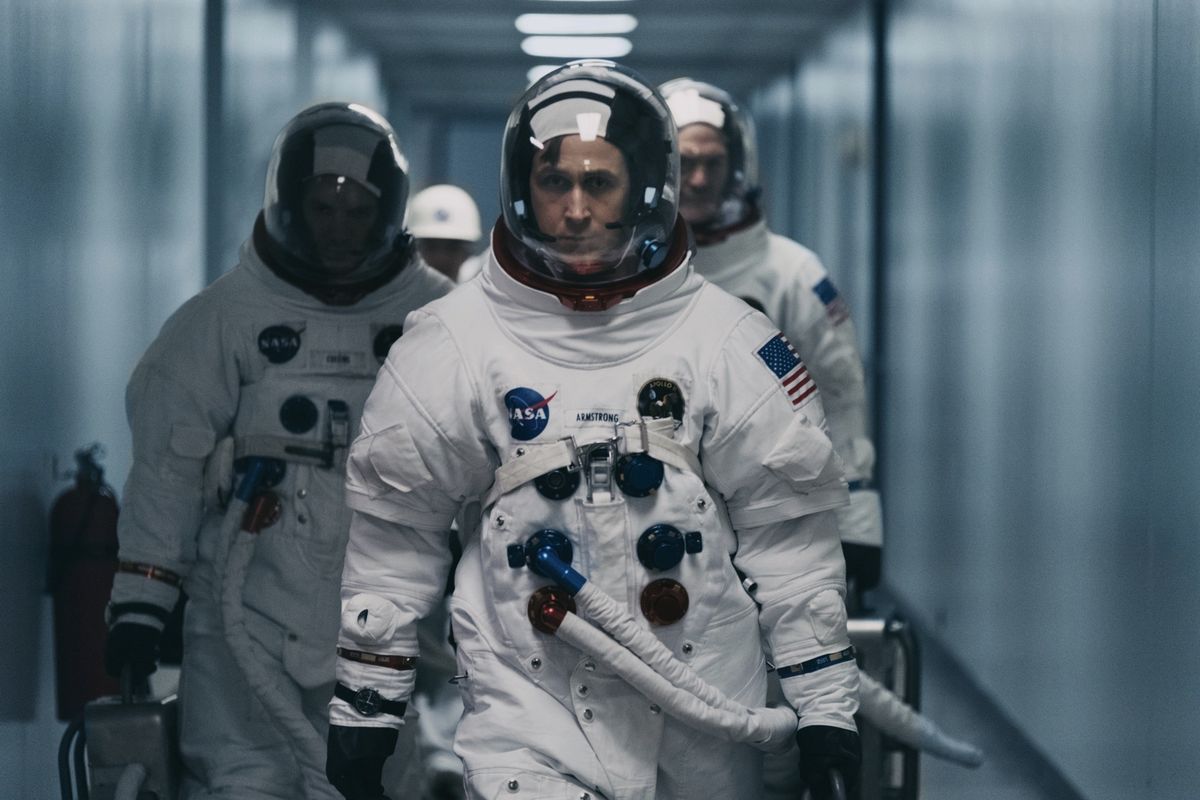 Upon Neil’s acceptance as an astronaut, the family moves to Houston as we track the arduous process leading up to the 1969 Moon landing. When Chief of the Astronaut Office, Deke Slayton (Kyle Chandler), explains that the Soviet Union is currently winning the Space Race, it results in more drastic actions being required. In this pursuit, Neil loses several of his companions during the ensuing years and we are presented with a man who becomes increasingly guarded on an emotional level.

Ryan Gosling does a fantastic job of portraying the methodical, but emotionally pained character, as you are constantly intrigued by what is driving him. The subtle progression of his becoming increasingly shut off from his family to the point of not wanting to say goodbye to his children on the eve of his launch to the moon is brilliantly done. Ever since his performance in 2011’s Drive, Gosling has become the go-to taciturn skilled professional who has a tortured soul just beneath his cool façade, and in the role of the stoic astronaut, he feels right at home.

Claire Foy, who impressively carried last year’s thriller Unsane, proves to be every bit Gosling’s equal as she provides a fantastic performance as the frustrated and worried spouse of the legendary astronaut. Janet’s struggle with not having the normal and stable life she aspired for when marrying Neil is compelling material, and in many respects, it is just as pivotal as Neil’s mission to the moon. Despite having a significant amount of time devoted to this struggle, I was left yearning for the film to cover more of their relationship dynamic.

When it comes time for the film to focus on the actual space exploration, First Man manages to continue to be a film strictly about Armstrong. During the ship launches the camera refuses to stray from focusing squarely on Gosling’s face as we go from cautious trepidation, awe-induced wonder, to sheer terror solely from Armstrong’s reactions. It is an effective method that allows the viewer to feel as though they have gone through the emotional journey of traveling in space. This may be frustrating to viewers hoping for more of a well-rounded glimpse at all of the events and individuals surrounding the Moon landing, but the film doesn’t stray so far as to not depict the historical event, which is a breathtakingly cathartic scene.

Despite being a film chiefly about Armstrong’s psyche, I confess that there were times that I was hoping to dig even deeper in regards to the man’s personality and the increasingly fractured nature of his and Janet’s relationship. However, that frustration in its own right is effective as it better drives home that Neil was naturally an enigmatic man and helps to empathize with Janet’s fear and confusion of whether her husband even cared if this mission would be his last.

First Man is ultimately not about the journey to the moon and its significance to the United States, but it is rather a transformative experience for the grief-filled astronaut. Through Chazelle’s direction and Singer’s screenplay, we are provided with a new angle wherein the astronaut’s journey to the moon is akin to a metamorphosis. Armstrong is increasingly shutting himself off from the world in his hardened rocket ship cocoon, and by the time he emerges he has evolved and comes to a profound conclusion that seems to heal his soul. With the same aplomb for exploring the place of ambition in an individual’s personal life, Chazelle has painted this historical figure in a fascinating light.