A treasure hunter and his daughter go after a valuable substance on an alien moon, not knowing who else they will find or how they will get home. The impressive feature debut from writer/director partners Zeke Earl and Chris Caldwell.

A treasure hunter and his daughter go after a valuable substance on an alien moon, not knowing who else they will find or how they will get home. The impressive feature debut from writer/director partners Zeke Earl and Chris Caldwell.

It has been said that the majority of science fiction stories would play just as well as westerns. Of course there are some exceptions, such as Moon, Interstellar and Arrival, but overall it’s probably true. Prospect is a science fiction film which relishes and flaunts its western heritage, more like True Grit than 2001, and it does so beautifully.

Jay Duplass plays Damon, who has been contracted to find and deliver rare gems known as “aurelacs”, and he thinks he knows where to look: a small moon covered in lush forest and toxic air. He takes his teenage daughter Cee (Sophie Thatcher), who is keen to be involved though much more risk-aware than he is. The spaceship barely lasts the journey, but they find some of the bizarre gems – kind of amber-encased in a meaty egg – and Damon shows her how to carefully harvest them. They keep going because he’s heard that the “queen’s lair” (a mythical huge hoard) is nearby… and along the way, they meet Ezra (Pedro Pascal) and his mate, two fellow prospectors who are more wide boys than cowboys. 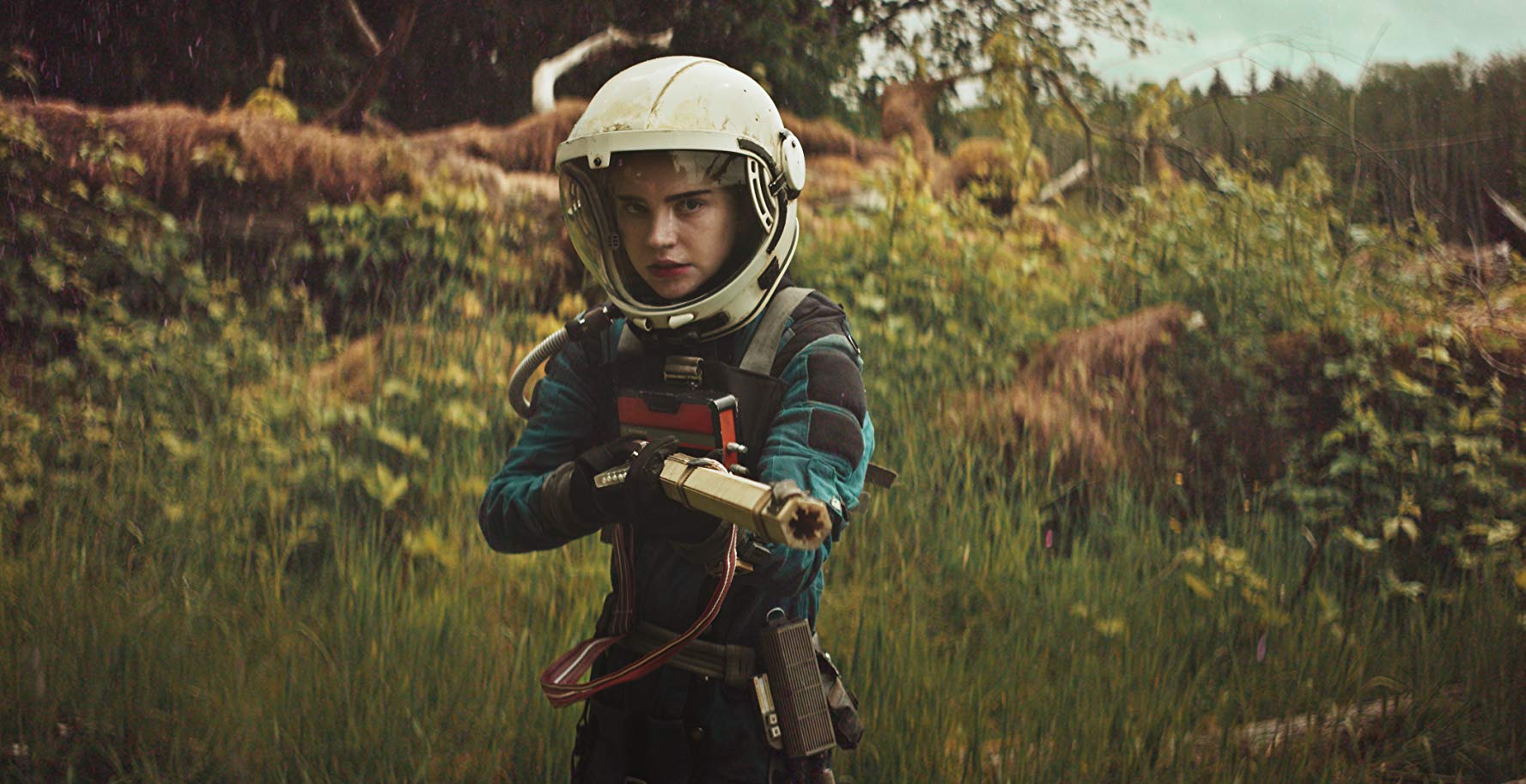 From there, the expedition goes downhill, and Prospect turns into Cee’s story; a coming-of-age movie, buddy movie, quest and survival adventure all in one. Yet none of it is rushed: this is a slow-burning film full of atmosphere and visual richness (occasionally with music to match). We see her develop independence, courage and trust instincts; and believably so. Thatcher plays her with vulnerability and humanity, and is extremely impressive: this is her first film (though I saw her briefly in The Exorcist season 1 as the young Regan) and I really look forward to seeing her in more; she looks like a young Scarlett Johansson, though with a little more intellect.

The other actor who we see almost as much of is Pedro Pascal (Game of Thrones). His Ezra is such a smooth talker that it’s difficult to tell how honest he is being most of the time. Pascal expresses just as much with his eyebrows and sometimes playful expression; it’s easy to see why Cee gradually warms to him (though contrary to her more wary judgement). The development of their relationship, made up of equal parts necessity and common interests more than trust, reminded me of the fourth Doctor and Leela (excuse my middle-aged geekiness), and was written carefully enough to be believable. 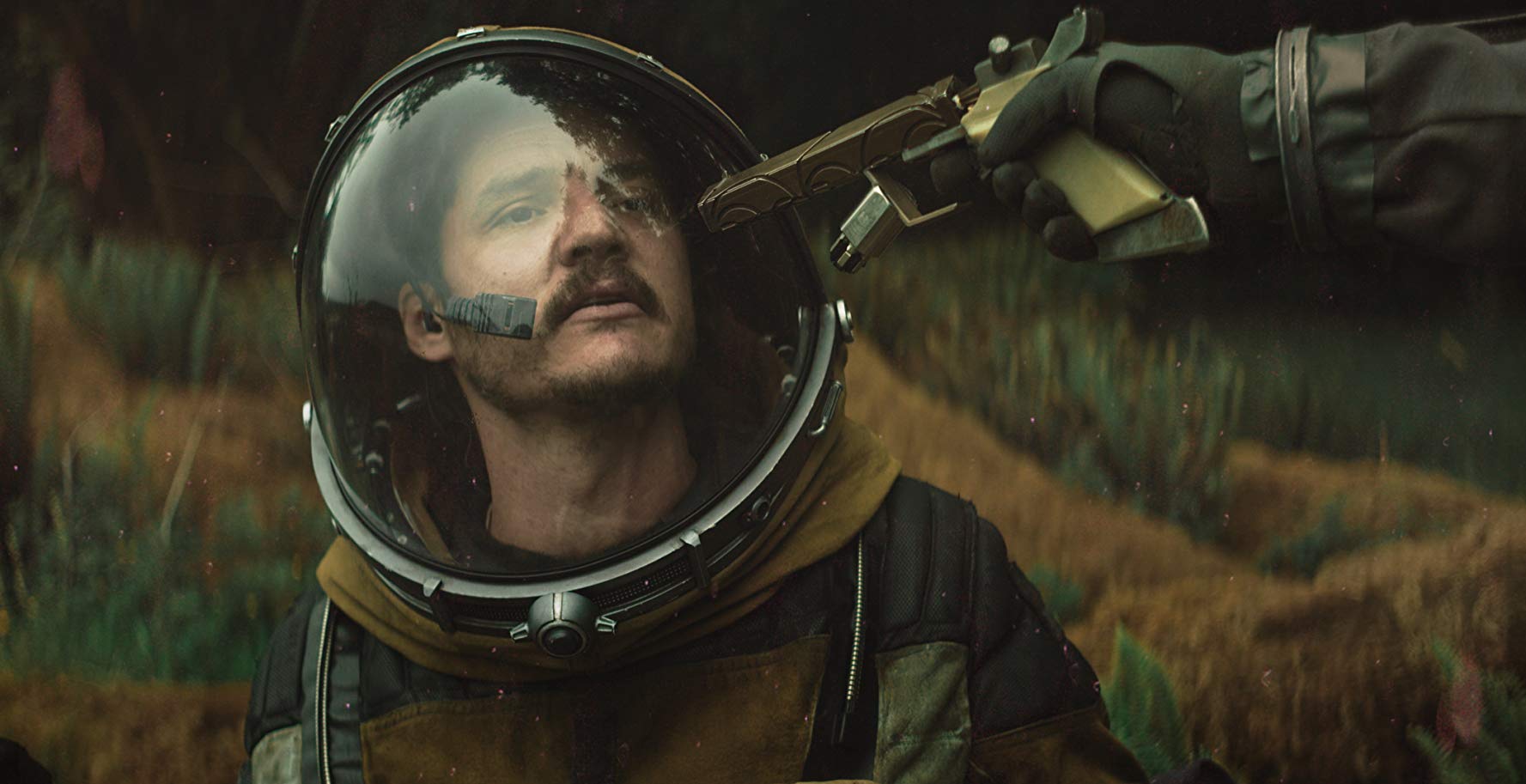 As well as the cast, the main attraction of Prospect was the environment of the Green Moon. Filmed in one of America’s fabulous national parks, it looks like the father and daughter have landed on Earth at first; but then you realise there is something off about the light, and there are strange bulbous… well, “plants” I want to say, but I’m not entirely sure… here and there amongst the ferns. They are very careful with their spacesuits, and indeed with everything: there are rules about how to open the pods that contain the aurelacs, and at one point we find out just how dangerous the vegetation can be. World-building extended to small settlements on the moon, too; and apparently, Zeke Earl and Chris Caldwell devised a complete history of the people and place while writing the story, including language and society.

Prospect started life as an award-winning short film, which is still available on Vimeo; if you watch that, it will give you the general tone, but nothing of the plot is given away, as it is a complete extrapolation from the short. The feature film had its UK premiere at Mayhem Film Festival 2018 in Nottingham and was very well received. I doubt it will have a terribly wide release at cinemas here, but is sure to have a cult following over time, especially by those who wish there were more films like Silent Running.