Home » Film » ‘The Night Comes for Us’ | Netflix Film Review

‘The Night Comes for Us’ | Netflix Film Review

The Night Comes for Us is the answer to a simple question: “What if The Raid was even more violent?” The result is the best hard action film of the year.

The Night Comes for Us is the answer to a simple question: “What if The Raid was even more violent?” The result is the best hard action film of the year.

Timo Tjahjanto’s The Night Comes for Us, which debuted globally on Netflix today, is the kind of film Jackie Chan might make if he was also a serial killer. The deranged and delirious Indonesian action epic sees every random object and piece of furniture in a room as a deadly weapon, and for two hours, those weapons are enthusiastically employed by most of the same folks you saw in The Raid: Redemption, The Raid 2: Berandal, and the writer-director’s previous effort, Headshot. It is, if you enjoy such things, absolutely glorious.

If you didn’t like such things in those aforementioned films, you’re s**t out of luck here, as The Night Comes for Us is just a more steroidal version of them. I have never, and I say this confidently, seen more snapped limbs, slashed throats, and pulped heads in a single two-hour span in my entire life. I’ve never winced quite so much, either. The violence in this film is so relentless and so drenched in blood and offal that a home release would need to come with a “Wet Floor” sign. And even that would likely be used to kill someone.

But that’s the point, right? Nobody comes to a film like this to enjoy the story, which is just as well, because The Night Comes for Us has far too much plot yet no moments of humour, insight, or believable human drama. For what it’s worth, it runs thusly. A guy named Ito (Joe Taslim) is one of six South East Asian Triad mini-bosses known as the Six Seas who, between them, control all of the illicit activity in the region. (This is explained, hilariously and with no finesse whatsoever, in up-front opening title cards that I skim-read and promptly forgot about.) He has a crisis of conscience when he’s required to gun down a cute little girl as part of a cover-up, and decides instead that he’s done with a life of senseless murder. The only problem is that doing so makes him a target of his boss (Sunny Pang), a legion of identikit henchman and outlandish enforcers, and, most worryingly of all, his childhood best friend, Iko Uwais. (His character has a name, but he’s basically just Iko Uwais with a slightly different haircut.) 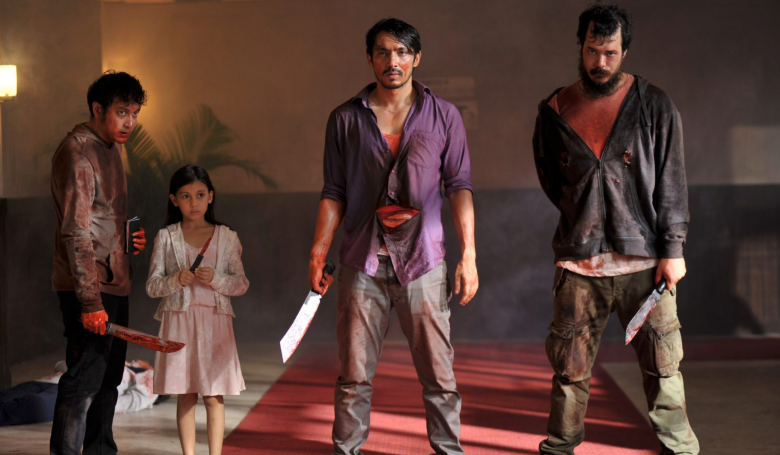 This is all varying degrees of melodramatic nonsense, but no matter. What it means is that Ito’s murder sabbatical is cut extremely short, as he’s forced to viciously defend himself against an army of grunting grunts who pour into action sequences like waves of video game baddies. Each set-piece ends two or three times just to spontaneously start up again when another handful of goons storm in. And all the while the prop guys, who earned their wages here and then some, sling buckets of blood all over the place.

As is to be expected, the choreography is a showcase of Indonesia’s national martial art, Pencak Silat, which is, again, just as well. Iko Uwais is to Pencak Silat what Jesus is to Christianity. The improvisational action style incorporates every limb, snaps every joint, and includes such paraphernalia as knives, guns, bottles, shards of glass, piano wire, PVC drapes, a cow’s leg bone, and an endless assortment of other odds and ends that are put to increasingly grisly and imaginative use.

The Night Comes for Us is 120 minutes of this, not a second of anything else, and I wouldn’t have it any other way. Tjahjanto showcases such a flair for carnage and sickening ingenuity that I’d be quite happy for him to remake this film again and again for his entire career, which luckily is what he seems to be doing. For lifelong action aficionados there has been no better, more indulgent extravaganza so far this year, and there probably won’t be for the rest of it. Such is the bloodthirsty brilliance of a film like this, which is content to be exactly what you expected, exactly what you wanted, as enthusiastically and dementedly as possible.