Hunter Killer, the action thriller you never asked for, is now the one you need to catch up with

Hunter Killer, the action thriller you never asked for, is now the one you need to catch up with

The story follows the aftermath of two submarines going missing in Russian waters, one Russian and one American. RA John Fisk (Common) must assign a team to investigate the events with untested Captain Joe Glass (Butler) taking the US Arkansas into the enemy water to learn the fate of the men on board. With this going on underwater, the above-ground mission sees four marines, Bill Beaman (Toby Stephens, Die Another Day), Devin Hall (Michael Trucco, Hush), Matt Johnstone (Ryan McPartlin, TV’s Chuck), and Paul Martinelli (Zane Hotlz, TV’s From Dusk Till Dawn) investigate the Russian Naval Base for answers. The truth is revealed that Admiral Dmitri Durov (Michael Gor, Bridge of Spies) has staged a coup against the Russian president Zakarin (Alexander Diachenko, The Star) as he looks to start the next world war and bring pride back to the Russia he knows. We follow the Americans who must now save the Russian president from the Russian Naval Base before both sides get involved in a war they don’t need to start.

Now, we know we don’t get many submarine thrillers nowadays, with Hunt for Red October being one of the most famous, so by not having many entries in this subgenre, it doesn’t feel over-saturated, hosting the same old story over and over. This helps Hunter Killer stand out in its own way; we get the tension of modern underwater warfare, with a scene built around avoiding a minefield being the most nervewracking in the movie. The idea that we don’t stay on the submarine helps too because this is a global operation similar to Eye in the Sky, as we have the key locations needing to work together to make the operation a complete success and stop any needless bloodshed. With the stakes of a potential World War on the line and a nuclear one at that, the tension is turned right up in this film. The smaller side stories that get mentioned are also important: we learn that the Russian President doesn’t get along with the Americans, but he doesn’t want to just start a war; and we see unlikely alliances for the greater good, which again provides tension, as you just don’t know if both sides will keep their word or not. 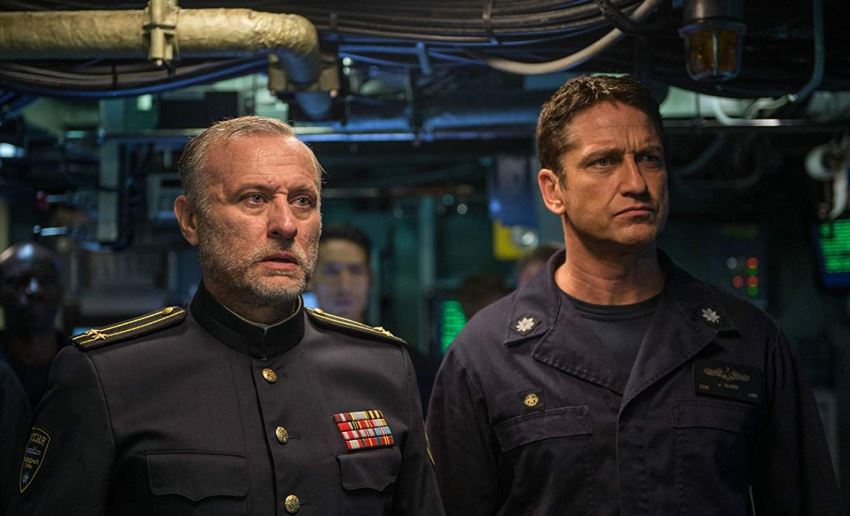 The character of Captain Joe Glass is important. We must like our captain in any of these films and Joe has been in the Navy for decades, rising to the rank of captain. He knows the challenges each member of his crew will face, and by knowing the jobs he knows exactly what wants from them. The banter between the four Marines, with the rookie taking the most abuse from the senior member, is generic but works for the film; he is testing him to see if he is good enough to watch his back. When it comes to the military war rooms we get the usual shouting and screaming between the people in the powerful position with CJCS Charles Donnegan doing most of this.

Gerald Butler is an actor that has always turned up in leading roles. He has never gotten near awards-worthy, though he can handle action films. Well, popcorn action. Hunter Killer shows his strengths in the genre; he doesn’t need to do much besides looking demanding on screen. This movie does have a large cast, and by having the separate components of the operation going on, it does give each actor time to get their moment of importance in. We should also take a moment to remember Michael Nyqvist, who we sadly lost last year in one of his final roles; he was a star of big blockbusters like Mission Impossible: Ghost Protocol, John Wick, and The Girl with the Dragon Tattoo.

Hunter Killer has come from the shadows of the film calendar this year, a bit like American Assassin last year. This is a tense thriller that will keep you on edge from start to finish and even at a 2-hour runtime, you will barely notice the time fly by. This is one of the surprises of the year in the popcorn genre and is a must for any action thriller fans out there.