The latest episode of The Good Place gives us some big, big questions to think about as the group learn more than they bargained for. The episode “Jeremy Bearimy” handles a fairly weighty subject for a sitcom, as it explores what it means to be a good person.

The latest episode of The Good Place gives us some big, big questions to think about as the group learn more than they bargained for. The episode “Jeremy Bearimy” handles a fairly weighty subject for a sitcom, as it explores what it means to be a good person.

The end of last week’s episode was something of a cliffhanger as the gang walked in on Michael and Janet as they were about to walk through a swirly magic door. As you might have imagined the rather extreme revelation has had quite an impact on… well, all of them.

This episode of The Good Place asks a fairly big question: “What does it mean to be a good person?”. In any other hands, this could have fairly limited potential for some big chuckles, but Michael Schur manages to make this really work. It’s an enormous question to ask and I’m not actually expecting the series to provide a definitive answer where so many scholars have failed. However, I think that “Jeremy Bearimy” has convinced me they’re going to be able to make this into an interesting new direction for the show that actually says something meaningful with more than a few laughs along the way.

A particular highlight for me this week was when Michael and Janet are caught in front of the portal and everything slowly unravels. Michael has to somehow explain how he is Zack Pizzazz, Gordon Indigo, a kindly librarian and a well meaning barman. The cover story of being an FBI agent called ‘Rick Justice’ who’s been sent to protect them all is superb, but perhaps not entirely convincing, and so he’s forced to tell them the truth; the total, unadulterated truth, and it doesn’t sit comfortably with some of the group. I can’t really blame them. Finding out that I was already damned to an eternity in the bad place would certainly skew my perspective on things.

Chidi takes the news pretty badly, and decides to completely embrace nihilism, which in his case seems to consist of making a massive pot of chilli and filling it with marshmallows and other candy. On the plus side, he doesn’t really care about teaching anymore so his students will all get “As or Fs, who cares?”. 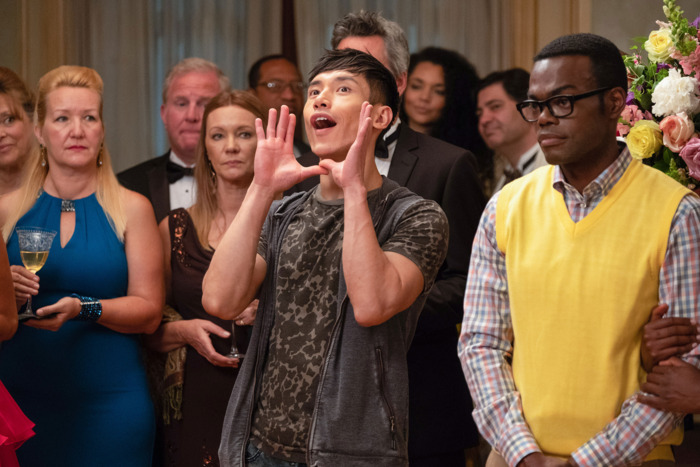 I think Jason and Tahani actually took the news in the best way – she was keen to start giving some money away, although she wanted to donate to the Sydney Opera House anonymously, just doing good for the sake of doing good. It’s when she gets Jason involved that things get interesting. The two of them work so well together as he shows her a better way to give away some cash – by just giving it to an assortment of random strangers. Then to top everything off the two of them get married so that Tahani can give Jason half of her money, much to the shock of Janet and everyone else. As “Jeremy Bearimy” was ending, Larry Hemsworth popped back onto the scene and I can’t see him taking the news of Tahani’s marriage particularly well.

Eleanor seems primed to go back to her old ways of being a “garbage person” when she finds a wallet filled with cash at a bar. It’s only then that she realises just how much of a positive influence that Chidi and the others have been on her life and decides to do the right thing. It seems like this might be the shape of the show to come in the future – the gang, who are now calling themselves the “Soul Squad”, are going to set out to do good. They’re not going to do it to try and save themselves but instead to try and save as many other people as they can with random acts of kindness. It sounds as though things are going to take a bit of a turn for the My Name Is Earl, but I have absolutely no problem with that. I loved My Name Is Earl.

I am fully on board with The Good Place and have been from the start. I was marginally concerned at how they’d keep things fresh this season and it seems I got my answer. I’m really looking to see things play out in the coming episodes and although I don’t think things will go exactly to plan, it should be a good ride.