The second episode of the rebooted Charmed, “Let This Mother Out”, sees the witches come to terms with their mother’s death as they are tricked by the spirit board.

The second episode of the rebooted Charmed, “Let This Mother Out”, sees the witches come to terms with their mother’s death as they are tricked by the spirit board.

After the pilot of the rebooted Charmed, which sees the mother’s death and the three witches learning that they have magical powers, “Let This Mother Out” did the notable backstep to allow the lead characters to process their loss and become accustomed to their new lifestyle. It would have certainly been odd if their mother’s death had no repercussions at all.

But of course, this is Charmed, so it is only fitting that this process is done in an odd way. A spirit board, claiming to be speaking on behalf of their mother, claims that Harry (Rupert Evans) cannot be trusted. Naturally, the witches want to trust their apparent mother, but Macy (Madeleine Mantock) has understandable childhood issues as she never grew up with her biological parents.

“Let This Mother Out” sees the sisterhood at odds with each other whilst meandering around town testing out their new powers. Comically, Maggie (Sarah Jeffery) is struggling to control her ability to read minds, which peaks when she decides to have sex with her ex because he was thinking the most nonsense statements in order to sustain his stamina. For someone who is tormented by this ability, Maggie seems happy to deal with the many voices she can hear in her head and she just brushes it off. 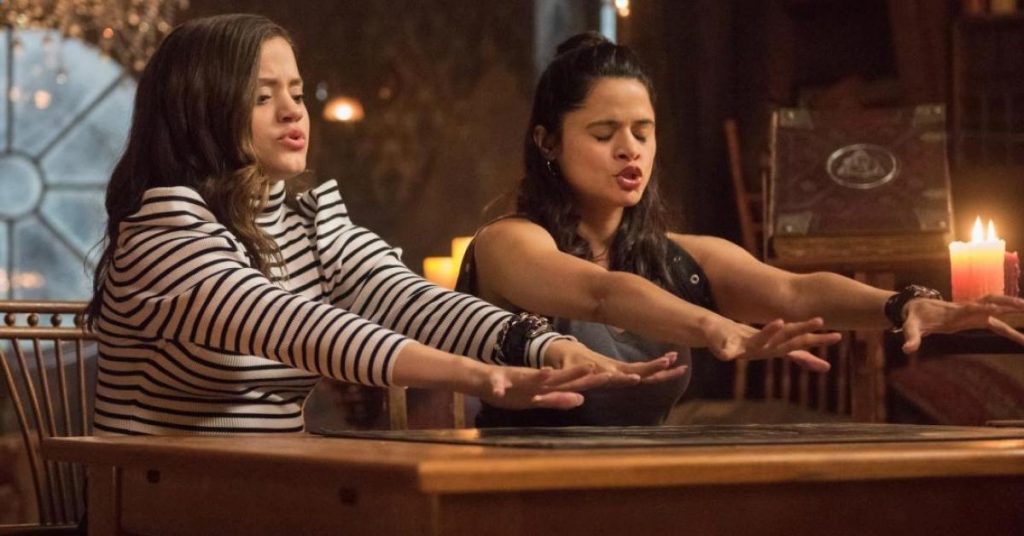 Macy, on the other hand, is purposefully at odds with her newfound sisters. Her character kind of makes sense because she is the logical and scientific person in the group that puts reasoning above emotions, which at the same time is kind of confusing when the show is about magical powers. In “Let This Mother Out”, Macy takes the sensible route of figuring out if the spirit board is telling the truth, which means drugging Harry with truth serum. Mel (Melonie Diaz) on the other hand, spends most of the second episode dabbling with the spirit board due to the desperation of needing to connect with her dead mother.

The rest of “Let This Mother Out” is tiresomely predictable. You know full well that the spirit board claiming to be their mother is false, yet the newly rebooted Charmed drags us down the quirky world of witchcraft to witness a result we spotted in the first second of the episode. It makes for okay entertainment, as the demon pretending to be their mother leaves the spirit board which causes a badly orchestrated fight with Harry, who is doing his utmost best to keep the witches grounded.

By the end of the second episode of Charmed, the sisters form a stronger bond. By processing their weirdly light grief, meant that Macy could finally accept herself as part of the family, and they can move on to more demon fighting, which is what we are all waiting for. Harry can also start training them, now they have gotten the whole mother debacle out of the way.

“Let This Mother Out” was an episode that was needed but it still feels like the cast is rehearsing for the reboot and getting to know each other rather than relaying warm chemistry through the screen. Amongst the madness of Charmed, it’s difficult to pinpoint the actual issue; maybe it’s the rushed character development providing a shallow feeling. Either way, I do hope it improves quickly.