It wasn’t as crazy as last week’s shenanigans, but “Rata/Ch’o” was still a fine episode of Mayans MC that left things in an even more precarious position.

It wasn’t as crazy as last week’s shenanigans, but “Rata/Ch’o” was still a fine episode of Mayans MC that left things in an even more precarious position.

This recap of Mayans MC Episode 8, “Rata/Ch’o”, contains spoilers. You can read our thoughts on the previous episode by clicking these words.

You can’t outrun the past, which seems to be the lesson in “Rata/Ch’o”, this week’s episode of Mayans MC. EZ (JD Pardo) pores over photographs and disappears into memories of he and Emily (Sarah Bolger), both convincingly de-aged; Felipe (Edward James Olmos) goes to confession, and reveals his sins to the man whose betrayal perhaps inadvertently gave birth to Los Olvidados; and Coco (Richard Cabral) fusses over the corpse of his mother, drowned by his own hands last week.

We’ll start with Felipe. Owing his eminence a debt, he’s there to inform him that Adelita (Carla Baratta) will be coming for his head post-haste, which in turn compels the good Bishop to turn to the Galindo cartel. I’m sure, given this show’s enthusiasm for offing men and women of the cloth, that this will go swimmingly for everyone involved.

While the MC debate what to do about the hidden border-crossing tunnels, Assistant U.S. Attorney Lincoln Potter (Ray McKinnon) and his federal cronies dupe Emily into admitting Cristóbal’s kidnapping and therefore her failure to report it. With this juicy titbit, the Department of Justice are able to strong-arm Galindo (Danny Pino) into signing a deal. These negotiations form the bulk of “Rata/Ch’o” and are dominated by the eccentric posturing of Potter, who, despite looking like Big Bird on the Atkins diet, is tremendous here. (I particularly like how his colleagues all wearily complain about his various weird quirks.)

Agent Jimenez (Maurice Compte), meanwhile, is fretting that these interrogations will expose EZ, which is a valid concern – they do, but only to Emily, and what she’ll do with the information remains to be seen. 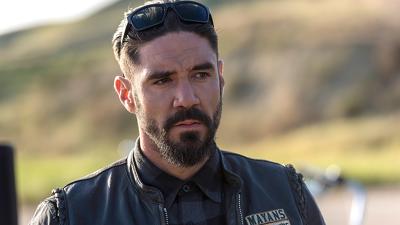 As though EZ doesn’t have enough to worry about. After Letty (Emily Tosta) confesses that her injuries were self-inflicted, he goes to check on Celia (Ada Luz Pla), is roped into babysitting her corpse, and, later, along with Angel (Clayton Cardenas), is tasked with disposing of it in the desert. This goes predictably poorly thanks to a broken taillight and an eager rookie cop. You can blame a rat for the taillight, by the way – they’re the vermin of choice in “Rata/Ch’o”, so it’s nice to see the namesake animal getting more directly involved in the goings-on.

It makes for a decent cliffhanger, certainly. But it’s also hilarious how inherently suspicious two men in black hoodies and gloves carrying a rolled-up, blood-stained carpet were in the first place. I mean, seriously – what did they think was going to happen?