The Good Place this week sees The Brainy Bunch finally accepting their eternal torment in the bad place. That’s not the end of it though for they are now The Soul Squad and they’re starting a new mission – to save as many people as possible. This week we finally get to meet Donkey Doug.

The Good Place this week sees The Brainy Bunch finally accepting their eternal torment in the bad place. That’s not the end of it though for they are now The Soul Squad and they’re starting a new mission – to save as many people as possible. This week we finally get to meet Donkey Doug.

When I sit down to write about each new episode of The Good Place I start to worry that I sound like some sort of pro-The Good Place bot from a distant Russian troll farm. I can assure you now that I am not a digital puppet of a nation-state (but I suppose I would say that if I was), The Good Place is genuinely consistently that good and it continues to be so in “The Ballad of Donkey Doug”.

In “The Ballad of Donkey Doug”, the gang have split into two groups: Eleanor and Janet are trying to help Chidi break up with Simone and Tahini and Michael are helping Jason try to save his dad’s eternal soul.

As much as I like Chidi and Simone together, you can’t argue with his logic; now that he knows about the afterlife and the fate of his immortal soul then he can’t risk spilling the beans. Janet continues to be superb and gets most of the best lines in the show, although everyone seems to get a chance to shine in every episode. In “The Ballad of Donkey Doug” Janet has taken to making her own “beeps” when she enters and exits a room; it doesn’t sound like much, but it’s very funny.

To help Chidi attempt to break up with Simone, Janet creates a VR simulator so he can practice his dumping technique. It’s like a Groundhog Day-esque loop of breakups, each more uncomfortable than the last, he even pretends to be famed FBI agent Rick Justice at one point. It might sound like Eleanor doesn’t have much to do in the episode but she also gets to have a go in the simulator, and deliver some great lines. Oh, how could I forget, Janet’s own trip into her simulation sounded… interesting. It concerned a steam room, Jason, and an old-timey strongman suit. 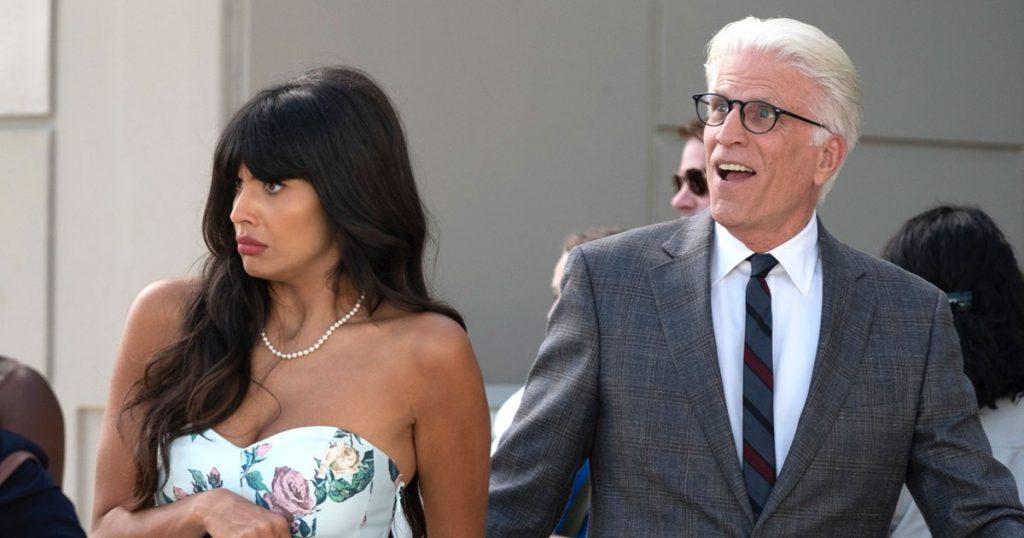 Elsewhere Team Jason have just landed in Jacksonville at the “Macho Man” Randy Savage Non-International airport. It’s a small background gag, but I must admit it gives me a chuckle. The revelations don’t stop there, either; in “The Ballad of Donkey Doug” we finally found out the true identity of Donkey Doug – he’s none other than Jason’s dad. The plan is to get him to finish his electrician training so he can go straight and secure his place in heaven.

Donkey Doug and his business partner Pill Boy have other ideas. The two of them are apparently going to be millionaires by selling Double Trouble – an energy drink and body spray in one. I’m intrigued by the prospect of such a product, personally.

Another weekly highlight in “The Ballad of Donkey Doug” is finding out who Tahani’s celebrity name drop will be. This week The Good Place gives not just one name drop, but two. The first is a reference to her “good friend, and yoga pupil” Sting (no last initial). The second is a nicely-timed burn on everyone’s favourite “weird creep”, Elon Musk – “‘Reach for the stars,’ as I said to my good friend Elon Musk. And then he shot his car into space!”.

In an episode filled with highlights, perhaps the finest moment was the tearful and elaborate handshake between Jason and his main bro Pill Boy. It’s just so hard to pick the best moment!

I love The Good Place. Tune in next week for another gushingly positive recap.