“Sweet Tooth” sees the characters finally comfortable in the Charmed reboot, but the demon-fighting story is too clouded by political angles.

“Sweet Tooth” sees the characters finally comfortable in the Charmed reboot, but the demon-fighting story is too clouded by political angles.


This recap of Charmed Season 1, Episode 3, “Sweet Tooth”, contains spoilers. You can check out our thoughts on the previous episode by clicking these words.

Last week I was content with the fact that the reboot of Charmed was bedding in the characters as quickly as possible so we can enjoy revelling in entertaining demon-fighting. Episode 3, “Sweet Tooth”, felt comfortable between the three leads, yet I was irritated by the constant use of political angles that felt primary, rather than secondary to the main story. If the core storytelling is going to be one big “f**k you” to our currently broken political landscape, then I’ll become less interested. We are here for the magic, demon-fighting and cheese; let’s expect nothing less.

As we learnt last week, there is a demon in town, threatening the end of the world and cocooned in an innocent bystander. We all know that this person is Angela, who we learnt was in a coma in the last episode. Angela is part of Maggie’s (Sarah Jeffery) group of fashionable friends, but unfortunately, she is struggling to adapt within her shallow friendship group since learning that she is a witch. I thought that “Sweet Tooth” was forming a storyline glossed in deception, with Maggie seemingly ready to be fooled by this demon, but unfortunately one of the sisters had her back.

Melanie (Melonie Diaz) figures out Angela is the vessel purely by instinct only because she woke from her coma the same night the demon made its presence known, which I found to be an easy tie into the story. People wake up from comas all the time; Charmed appears to have this way of making everything sound convenient. It gets even more convenient when Macy (Madeleine Mantock) makes this scientific cookie designed to get the demon vessel out, and Melanie tries to poison Angela with the baked good. Of course, the demon didn’t have a sweet tooth, so that experiment failed. 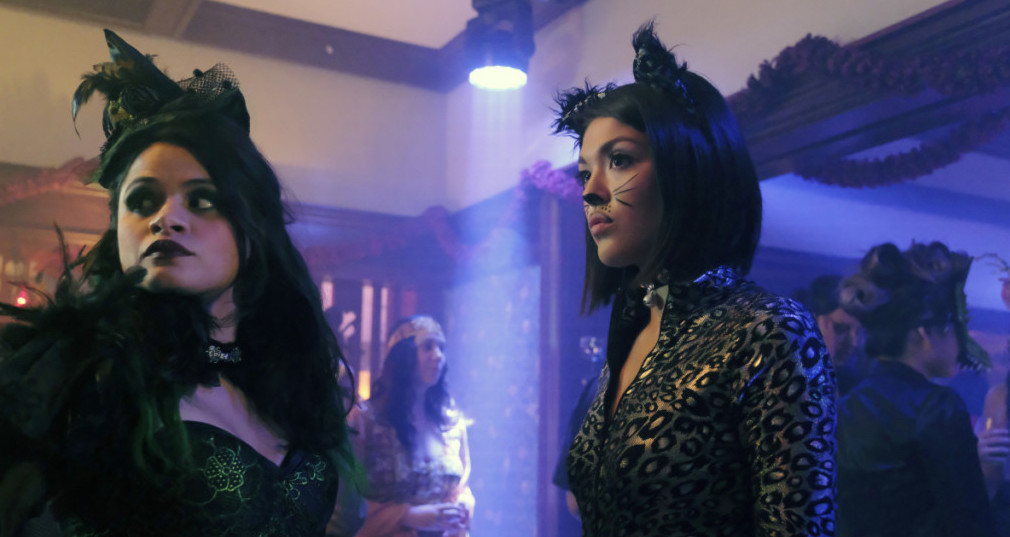 Meanwhile, Charmed continues this theme that it is difficult growing up as a young adult while fighting demons; I mean, saving the world while trying to have a normal life must be difficult, right? “Sweet Tooth” reminded me of the early days of Buffy the Vampire Slayer, with the stake-wielder having to come to terms with the reality that a healthy life is not possible, but the problems for these characters is shrouded by political signalling for the audience.

To give you an idea of the political themes shouted at the audience in “Sweet Tooth”, Melanie has a real problem with Harry (Rupert Evans), who is essentially Giles from Buffy, and accuses him of been threatened by powerful women, which forces him to respond with “fake news”. Melanie later reveals that Harry isn’t the problem, she hates how she has to keep secrets from her girlfriend when she’s never had to be in the closet in her life. Macy tells her sisters why she is so guarded, describing how difficult it was to be a minority at school, which explains her passive nature since the opening episode. I don’t mind political angles, but Charmed spells them out in such a way that it insults the audience’s intelligence.

But then, the ending of the “Sweet Tooth” continues down that same predictable path; the witches host a Halloween party, inviting Angela so they can finally capture the demon inside her. The only way they can entice the beast is by dripping virgin blood, and with no surprises whatsoever, Macy is a virgin, so she cuts her hand to make a trail while explaining how being a virgin is difficult amongst peers, reflecting the pressures of women in society.

By the end of the third episode, the three witches have trapped Angela, who is still consumed by the demon, in their own home. What could go wrong? The main takeaway from “Sweet Tooth” is that Charmed has an apparent political agenda with the storytelling, and the only joy I can get from that is by imagining a person wearing a MAGA hat, red in the face, and frothing from the mouth because the CW network dares to challenge their skewed beliefs.