A tedious filler episode, “Sojourn” continues to languish in the past but fails to prove itself a necessary part of the season.

A tedious filler episode, “Sojourn” continues to languish in the past but fails to prove itself a necessary part of the season.


This recap of American Horror Story Season 8, Episode 8, “Sojourn”, contains spoilers. You can check out our thoughts on the previous episode by clicking these words.

The world isn’t fair, even if your daddy happens to be the Devil. After last week’s burning of Michael’s maternal stand-in, Miriam, and the two remaining warlocks who didn’t wish they never met him, in “Sojourn” he’s feeling a tad beat up by those mean witches. Sure Cordelia offers to help him find his humanity, but that’s not really his vibe. It doesn’t help that Cordelia has hidden Miriam’s soul so that Michael cannot revive her. His goal becomes twofold–bring back Miriam and kill the witches. No big for a boy-man. Remember how Michael super-speed aged? He’s like a preteen with phenomenal cosmic powers and itty bitty impulse control.

That adolescent part presents an inconvenient problem. Essentially, Michael doesn’t know how to be the Anti-Christ and his deadbeat dad won’t even give him some insight. Or at least it takes him four days to return his kid’s phone call. So typical. That call back comes in the form of some bizarre visions, but allows Michael to wander randomly into a church of Satan led by Sandra Bernhardt. Which is oddly disappointing to Michael until he meets Madeline (Felicia Tilman), another surrogate mother. Between her, Constance, Miriam, and even the witches, it seems the Anti-Christ may be a man, but the ladies led/pushed him down his dark path. At first, she doesn’t know him, bragging about how selling her soul gave her a Lazy Boy and some carnal pleasures. Madeline talks about the coming of the Anti-Christ, which must feel awkward for Michael. Almost in frustration, he reveals himself to her, to her delight.

They return to the church of Sandra and Satan just in time for a human sacrifice. Much as Bernhardt’s delivery is funny, this section is reminiscent of American Dad when Stan faced the Anti-Christ who was like the Riddler of Hell Gotham. Some of the jokes land, but it feels obvious. In true American Horror Story style, however, we pull tonal a 180 and Michael takes over the human sacrifice. At the weekly Wednesday potluck, Michael reveals to Madeline that he doesn’t know how to bring about the end of days. He just needs some career counselling. 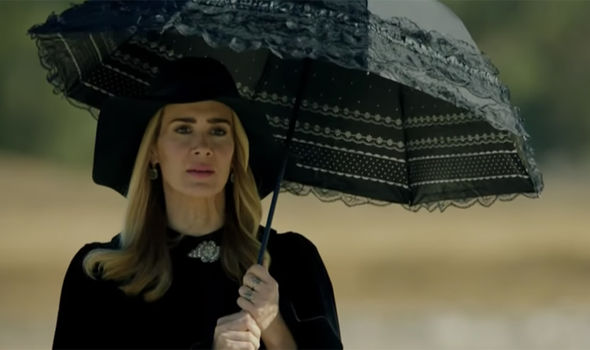 The solution then is to drop him off with two coked-up super brain believers (Billy Eichner and Evan Peters) whose greatest sins might be those bowl haircuts. We also get to meet pre-Apocalypse Ms Venerable who was more stylish but decidedly still as savage before the bombs dropped. The pair runs a robotics company, so now we know how Miriam became a robot. This entire section is strange, in part because of Evan Peters in a He-Man wig. It also leads to a “That’s it?” ending.

As much as I am enjoying aspects of this season, we need to get back to the present. We’ve been in the past for over half the season and this is the first time it felt tedious. Much of “Sojourn” could have been handled in about 20 minutes of B subplot with last week’s episode. And yet, it looks like we’re still in flashback next week. I may feel differently when I watch everything come together; as of now, I would say this season needing some smarter editing. Sadly, the best part of this episode was everyone on Twitter tagging poor Ryan Reynolds, who apparently gets handed around by the Church of Satan.