Grisly, pulpy stuff without a scrap of irony in sight, Dark Heart is a grim and moody bit of straight-shooting procedural television.

Grisly, pulpy stuff without a scrap of irony in sight, Dark Heart is a grim and moody bit of straight-shooting procedural television.

The best way of describing Dark Heart, ITV’s new six-part procedural penned by Unforgotten’s Chris Lang, is thusly: You know those do-it-yourself vigilantes who pose as young girls on social media to entrap predatory paedophiles and then broadcast the whole thing on Facebook Live? Well, imagine one of those guys watched David Fincher’s Seven too many times and suffered a psychological break. It’s basically that.

It seems to be, anyway, but after just one episode it’s difficult to tell. A serial killer is graphically torturing and bumping off nonces that the system failed to convict. One victim (Mark Fleischmann) is force-fed a bottle of whiskey and chopped up; another (Nicholas Asbury) is set about with a blowtorch. There was another murder some years ago but the wrong man (Robert Hands) presumably took the fall for it. The killer, whoever he or she might be, is always filmed through a weird filter and wears a creepy mask. 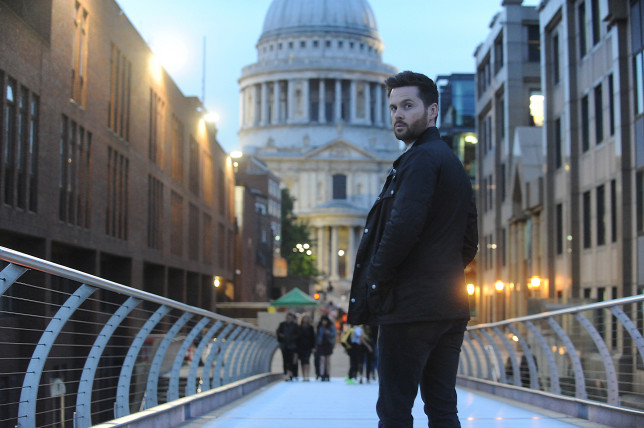 So far, so ridiculous, and that’s before working-class British Batman appears. Will Wagstaffe (Tom Riley) lives in the house of his murdered parents and sulkily drinks himself into even more of a clichéd enigma. He has a sister (Charlotte Riley) with a complicated love life and when one of his investigators makes an unsavoury remark about the victims being paedophiles, he has a little tantrum and tells him to “go tweet Katie Hopkins”, which I found quite funny.

These kinds of clichés are what I admire most about Dark Heart – or, I should say, the proud way it presents them, content as it is just to be old-fashioned pulpy fun. It’s playing everything completely straight and with a side order of unflinching sadism, and why not? All the characters are, thus far at least, notably underdeveloped; DI Wagstaffe – a creation, by the way, of novelist Adam Creed – has a partner (Anjli Mohindra, fresh out of Bodyguard) and a sort-of girlfriend (Miranda Raison) whose names I had to look up just now. They’re called Josie and Sylvie, if you’re interested. But the creepy central mystery is right up my darkened, blood-stained alley, and the show’s willingness to not really give much of a s**t about being different is quite refreshing. I hope it’ll be content just to keep serving up stubbly sleuth shenanigans and leave everything else at the door.