‘The Nutcracker and the Four Realms’ | Film Review

Disney’s attempt at expanding on the mythology of the classic “Nutcracker” story is needlessly convoluted, with an overly familiar story that feels more like a big-budget holiday cash-grab than a creative re-imagination. Unlike the toy soldier at the centre of the story, The Nutcracker and the Four Realms never comes to life.

Disney’s attempt at expanding on the mythology of the classic “Nutcracker” story is needlessly convoluted, with an overly familiar story that feels more like a big-budget holiday cash-grab than a creative re-imagination. Unlike the toy soldier at the centre of the story, The Nutcracker and the Four Realms never comes to life.


The Nutcracker and the Four Realms follows in the footsteps of other edgy attempts from Disney to reinterpret beloved classics into original live-action versions. In an article I wrote earlier this week, I stated that Disney live-adaptations can fall into one of two categories – a straight retelling of a classic story or a creative expansion of the original. Apparently, I was wrong, as The Nutcracker manages not to fit into either category. It is essentially 2010’s Alice in Wonderland, repackaged with a blanket of fake snow and a Santa cap thrown on top for the holidays.

Instead of Alice, we are presented with Clara Stahlbaum (Mackenzie Foy), the middle child in a family of three who is still adjusting to the reality that her mother has passed away. It is the night of Christmas Eve and before attending an extravagant holiday party, Mr. Stahlbaum (Matthew Macfadyen) presents Clara with a gift that her mother never had the chance to give her before passing away. The gift appears to be a locked egg-shaped box with a cryptic note from Clara’s mother, only stating, “Everything she needs is inside.”

During the party, Clara is intent on finding the maker of the box, her godfather Drosselmeyer (Morgan Freeman), in order to theorize where the key to this device may be. Just like every recent Disney film, Clara is revealed to possess a great aptitude for science and mechanics and feels as though she doesn’t belong in her current world. Upon returning to the party, tensions mount when Clara’s father scolds his daughter for not complying with tradition and appearing friendly and pleasant in front of the fellow party guests.

I understand that Disney has a lot of guilt over the dependent and helpless princesses that have populated many of their past tales (I’m looking at you Snow White). This archaic depiction is very much at odds with current societal values, and it makes sense that the studio would want to distance themselves from such a poor message for children. However, when every lead female protagonist is shown to be a beautiful young girl with a passion for an occupation associated with the male gender it begins to feel stale and inauthentic. What began as a fresh take on what a Disney princess would look like in the modern age is feeling increasingly lazy and in need of another update of some kind. 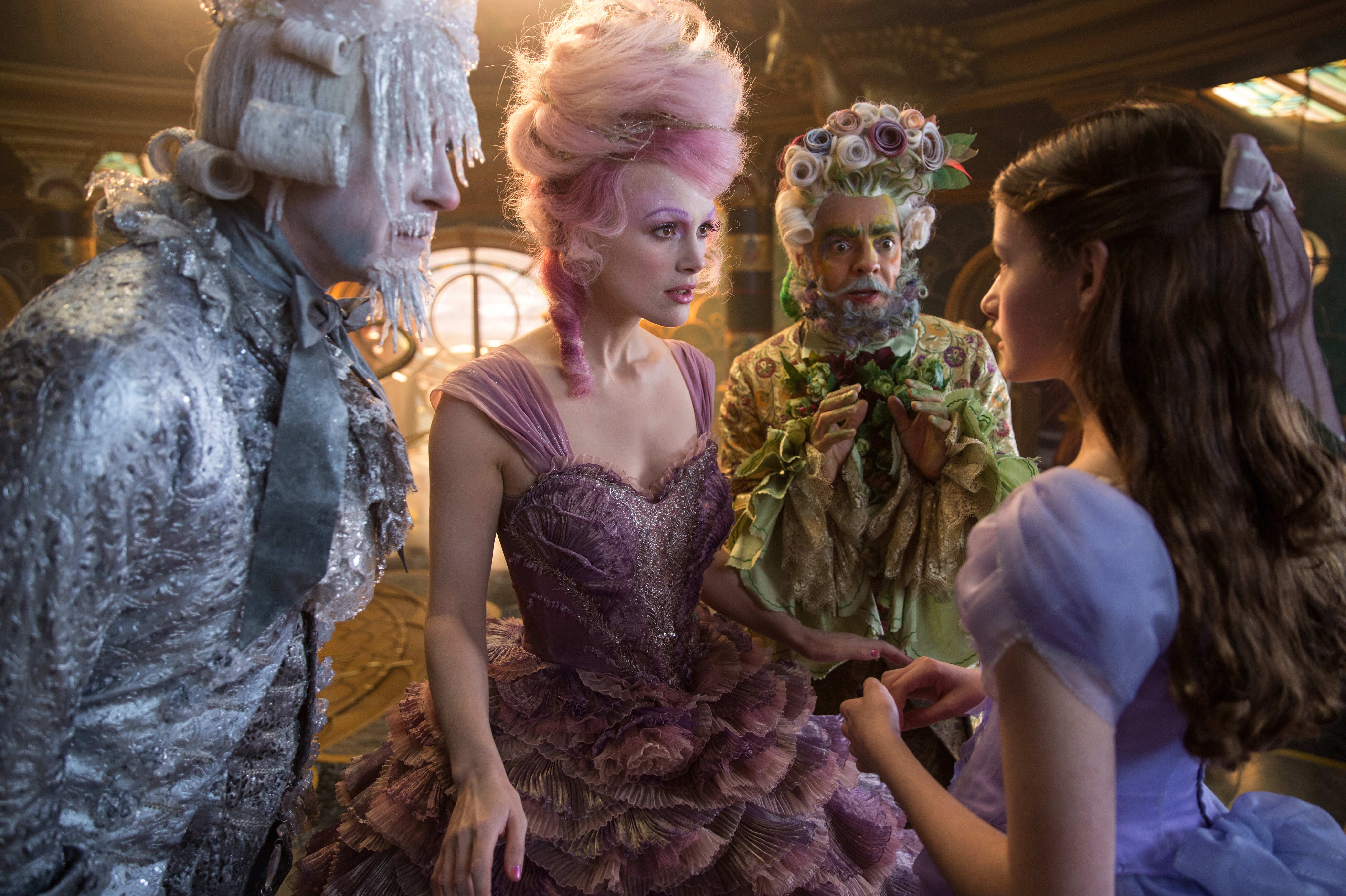 During the gift ceremony in which Drosselmeyer presents each of the children with a scavenger hunt for their Christmas gift, Clara finds herself stumbling into a magical realm. Once Clara is unceremoniously plopped into the fantastical world, she quickly meets Phillip (Jayden Fowora-Knight), a nutcracker toy soldier who is inexplicably brought to life. Upon being made aware of Clara’s last name, Phillip quickly identifies that her mother was a ruler of this land, meaning that Clara is technically a princess.

After venturing past an army of mice, Clara is brought before one of several rulers of the kingdom, Sugar Plum (played by a questionably over-the-top Keira Knightley), who greets the young girl with open arms. Clara is quickly brought up to speed about the peril the kingdom has been in ever since the demise of the girl’s mother. For whatever reason, it is essential that Clara retrieve the key to her egg-shaped box in order to stop the ruler of the Fourth Realm, Mother Ginger (Helen Mirren), from undoing all that Clara’s mother has created.

It is around the point when Clara is presented with an extended ballet sequence detailing the history of the kingdom that the film goes off the deep end. As can probably be gleaned from just this synopsis, The Nutcracker and the Four Realms quickly becomes needlessly convoluted as the audience is bombarded with dense exposition left and right. It is understandable that the mythology of the classic short story would be expanded, but the result is so incoherent it will make your head spin. Between the sporadic pacing and the amount of information that is unloaded on the audience all at one time, I had whiplash and still felt as though the rationale for what Clara was attempting to achieve didn’t make a lick of sense. Considering this is being positioned as a family film, I have no clue how kids will remotely grasp what is happening. 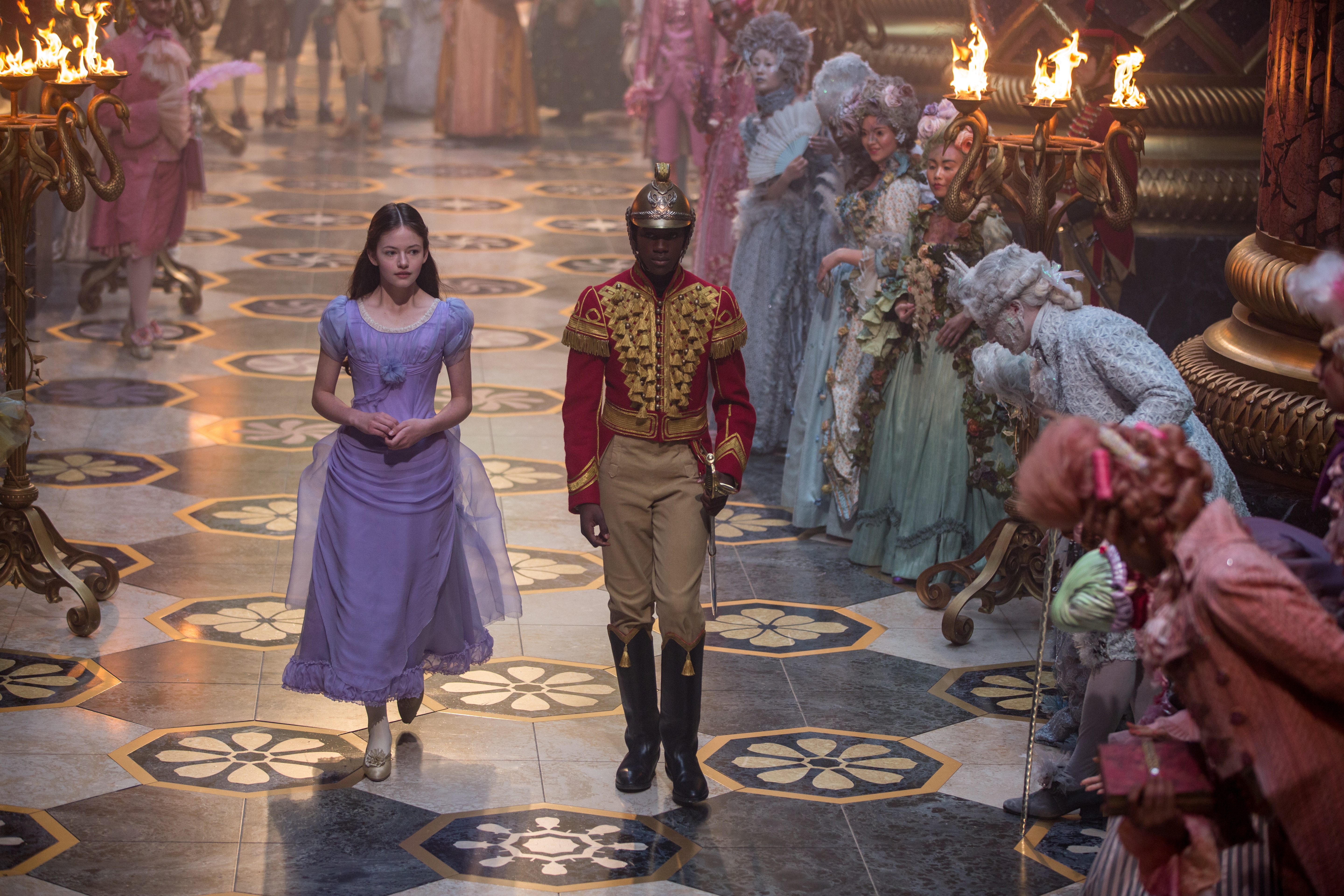 The fantasy world depicted does feature some lavish winter landscapes. The combination of breathtaking sights and James Newton Howard’s epic score featuring portions of Tchaikovsky’s classic ballet is effectively grand. Despite some impressive visuals, the Four Realms kingdom feels remarkably small as we are confined to what feels like just a throne room and expansive forests. I never believed this world to be vast and wide, which should be the bare minimum for a fantasy adventure film. Some of the locales were even a bit uninspired, as it felt at times like Clara and Philip had stumbled onto the unused sets from the last Alice in Wonderland movie.

Although there are some unexpected narrative swerves in the third act, the film largely follows the template of past live-action Disney stories. With the tired story elements of the protagonist being the chosen one, long-winded exposition, and a dull, surprisingly violent CGI battle at the climax, there is nothing refreshing about this effort. This was disappointing as, against my better judgment, I was fond of the idea of a radical reinterpretation of “The Nutcracker.” Alas, unlike the eponymous wooden toy soldier at the centre of the story, this cynical holiday cash-grab never comes to life.