Episode 4, “Exorcise Your Demons”, is the strongest instalment in the Charmed reboot so far, giving the characters a difficult decision.

Episode 4, “Exorcise Your Demons”, is the strongest instalment in the Charmed reboot so far, giving the characters a difficult decision.

This recap of Charmed Season 1, Episode 4, “Exorcise Your Demons”, contains spoilers. You can check out our thoughts on the previous episode by clicking these words.

Welcome to another special edition of the rebooted Charmed, which continues to weigh in on any political angle that is achievable in a single forty-minute episode. I guess the mid-term elections are coming up, so I do not blame them. But I wish it weren’t so flagrantly obvious. If you can put aside the undisguised one-liners, then Episode 4 is the firmest episode in the series so far.

Last week, Angela, who is consumed by the harbinger, is tied up in the witches’ home. This causes an inescapable issue for the witches because Angela’s mother has reported her missing. “Exorcise Your Demons” requires the witches to find a solution to the problem, and quickly.

An Elder pays them a visit and explains to them that Angela needs to be killed by the first moon, or it will be too late. As usual, the witches are at odds with the decision, and they all go off in their separate ways doing the absolute opposite of what is required.

Macy (Madeleine Mantock) is routinely the logical member of the group, so as primary she weighs up the fate of the world and decides that it makes sense to kill Angela to save millions of people. Maggie (Sarah Jeffery), on the other hand, discovers that Angela is still retrievable from the harbinger, and alerts the Elder, who is resistant to altering the decision. 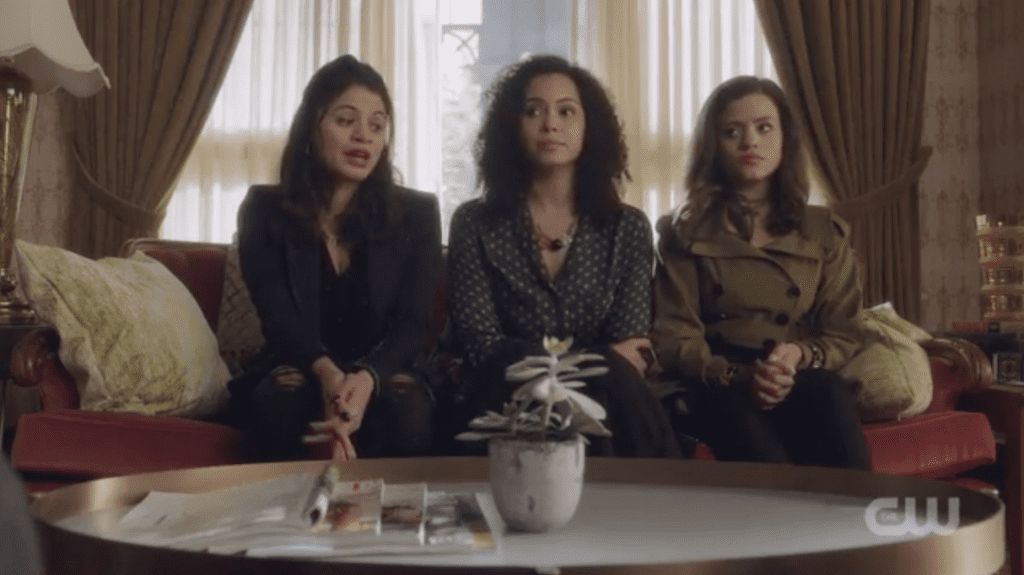 “Exorcise Your Demons” offers some light comedic moments, especially when the investigators come round to ask the witches questions. One of the detectives is Melanie’s (Melonie Diaz) girlfriend, putting further weight on their already fragile relationship. In the end though, Charmed gives the witches their first tragedy.

Their mother conveniently left behind a spell to exorcise the demon that is held inside Angela; apparently, she had a close bond with the girl before she died. The elder approves the spell, due to the reputation of the mother. The witches perform their magic, but unfortunately, one of the investigators who was snooping around gets caught up by the impact and dies; the harbinger is caught, but the witches experience their first human tragedy.

“Exorcise Your Demons” presents the reality that the witches face; kicking around demons is a risky job, but the entire scenario left a bitter taste in their mouths when they find out that the Elder reconstructs the timeline to make it look like the investigator killed himself due to guilt of being a murderer; Melanie’s girlfriend is distraught.

“Exorcise Your Demons” leaves on a fitting cliffhanger. The elder has the harbinger encased in a paint tin, and she is temporarily possessed by a new character unknown to the story so far; he switches paint tins, meaning the harbinger story is not going to die any time soon.

Charmed is finding its feet, for now.