“Inside the Pretend” is a satisfying season finale to a solid, though often stretched sophomore season of The Deuce.

“Inside the Pretend” is a satisfying season finale to a solid, though often stretched sophomore season of The Deuce.

Tonight we say goodbye, at least for the time being, to the dark world of The Deuce. Season three was supposedly just renewed in order to tie things up, which implies that the Season 2 finale, “Inside the Pretend,” leaves many untidy endings. It does and doesn’t. It depends, as shows like this often do, on how you value the various characters who people this world.

The extended episode opens with Lori on her knees, though not in the way you might think. Instead, she’s heaving up all her nerves that C.C. might turn up for the premiere of Red Hot. The p**n is about to open on ten screens, which Harvey assures Frankie, his nervous producer, is huge. There is something oddly sweet about Larry comforting Lori, considering that he himself still has a finger in the pimp business.

Candy arrives in full grande dame mode, dripping in jewels and with her own name above the title on the marquee. Reviews are looking stellar for her film, so what does it really matter that her date is still talking about her as a p**n star instead of a filmmaker? This beginning sequence is just the right balance of “Inside the Pretend” where we see characters who have struggled potentially get their happily-ever-after. Or at least dress up like they will.

Speaking of happily-ever-after, Vincent does a round of co-parenting with his ex-wife and children. They talk the way people on these shows do to demonstrate that they are adults who have moved on. He asks about her boyfriend, she asks about Abby. Vincent spells out his dream, which apparently hasn’t changed since wife number one. Despite his promises, he hasn’t really broken with the mob, and in fact, it seems his group is running in even more dangerous circles when one phone call has Black Frankie kill Carlos (for no real reason) before picking up some takeout. Even Paul is sucked back into mob funding, though, like so many well-meaning characters, doing what he thinks will better their world: in this case, community theatre. 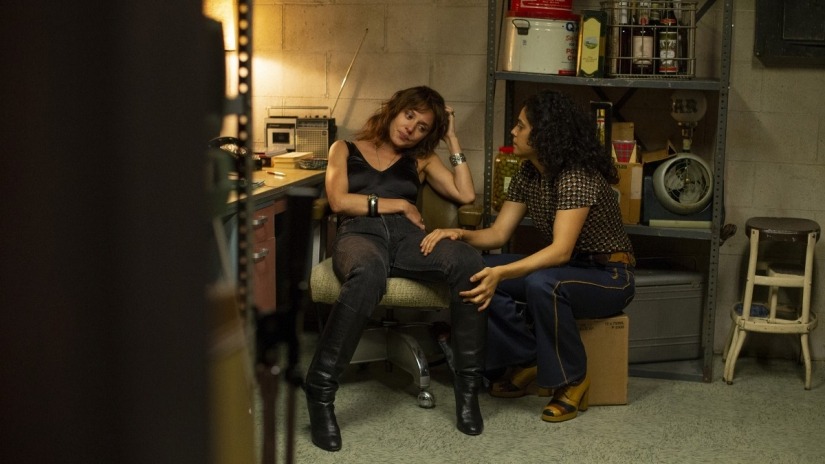 Last week’s foreboding hits hard this episode, with the first body unrolled being Ashley aka Dorothy. Her death is revealed when Alstin finds her rolled in a rug, covered in maggots. The deep irony here is that she got out to avoid this type of fate, which would have been highly probable had she stayed with C.C. Yet her compulsion to help others brought her back to the Deuce to help other girls and ended with her crammed behind a dumpster. After learning of Ashley’s fate from Alstin, Loretta turns on Larry as a representative for all the pimps, charging him guilty whether or not he had anything to do with her death. He’s a figure, a man who pretends to protect women while damaging them possibly beyond repair. Loretta walks away, joining Abby at the High-Hat.

Much of “Inside the Pretend” is about trying to get out. Darlene finds work in a clothing store, only to be recognized by a “fan.” Candy, despite landing a spot with a late night talk show host, finds her past will never be that far behind her. Particularly crushing is how the widespread attention has impacted her son, causing him to get in fights with classmates. Candy’s father bans her from seeing him, leaving him to watch her walk away from him, possibly for good. Even Melisa, lost without C.C., can’t land a new pimp and instead finds a place in the brothel courtesy of Joey.

For Lori, even though she knows she was bought from C.C., she cannot move past her deep fear, refusing to go to LA until she has his permission. Frankie levels with her in a deceptively simple scene that shows just how strong a hold C.C. truly had. Emily Meade gets a double gold star for this episode.

Soon enough, C.C. isn’t the only pimp off the streets. Rodney is killed in a botched drug robbery.  Darlene takes a cue from Loretta, finally breaking free of Larry. Their goodbye, about pretending, is possibly the key to the series. She notes that because she saw him act, she realized that they were just playing parts. In some way, that’s true of everyone on the show, be they pimps, or ambitious social reformists, or prostitutes-turned feminist directors.

“This is the future for us,” Harvey promises as he shows Russell and Candy his new VCR. Season 3 will undoubtedly fast forward to the 80s. Though Season 2 gave us some exceptional storytelling, it felt too stretched at some points, too thin on some plot lines that could have used more attention, and too packed with throwaways that weren’t actually needed. These are minor issues, however, in the grand scheme of the weekly performances. As Vince reminds us at the episode’s close, “We can be better than this.” If nothing else, The Deuce challenges its actors to be better and challenges us to question how we view the world. At least we have one more season to see those challenges unfold.