“The Tsuranga Conundrum” sees the current season of Doctor Who finding its feet, but the latest run is still in need of a defining episode.

“The Tsuranga Conundrum” sees the current season of Doctor Who finding its feet, but the latest run is still in need of a defining episode.


This recap of Doctor Who Season 11, Episode 5, “The Tsuranga Conundrum”, contains spoilers. You can check out our thoughts on the previous episode by clicking these words.

At the midpoint of the season, is Doctor Who finally getting to grips with itself? Episode 5 of the current series, “The Tsuanga Conundrum”, sees the return of a classic Doctor Who trope: the base under siege.  The Doctor and friends find themselves on a Red Cross-style space ambulance, heading for safety after being blown up in a cosmic junkyard sonic mine incident. Trouble is the ship, with a couple of other patients on board, is under attack from a Gremlin-like creature called a P’Ting that seems hell-bent on eating everything in its path.

The Doc has to stop the seemingly invincible creature (imagine an aggressive mutant Adipose), try to save the patients, and get the ship to base before the powers that be realise it’s under attack and blow it out the sky.

The story is another Chibnall episode and has what seems to be the usual hallmarks. There’s a dramatic race against time,  with an alien menace at large, and a collection of characters that may not make it to the final act, much like his script for 10th Doctor Episode 42.

With feet set firmly on solid ground, “The Tsuanga Conundrum” certainly moves along quite nicely. We meet the two staff nurses on board trying to care for the patients, as well as a pregnant alien fellow with dubious morals and a brother, sister and android trio. The sister is Eve Cicero, a legendary fighter that The Doctor knows of, and uncharacteristically enthuses over. It’s one of a few niggles that have troubled the series so far.

Despite being a more traditional adventure, The Doctor is once again in a bit of a tizz for a lot of this runaround. After the initial incident, she spends a lot of time moaning about her injuries and fussing over where the exit signs on the ship are. At the halfway mark I would like to see the Doctor in much more control of the situations she has found herself in.

Previous episodes have seen her in similar positions, often observing and leaving much of the dirty work to her Tardis Team. By the end of this outing, she has figured out the creature’s motivation, but a lot of the work is done by the support.

The P’Ting is also a problem. 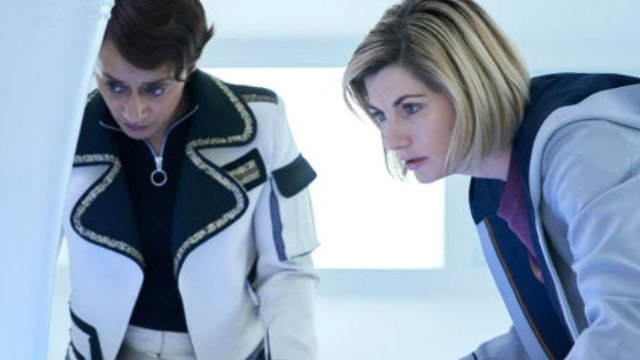 It’s a little tiny monster that is more comic than threatening, and when you are trying to up the drama stakes, an effect like this can often drag you back a ways. “The Tsuanga Conundrum” seems a more familiar Doctor Who episode, but as with previous episodes, the stakes and danger seem so low that it feels inconsequential.

Halfway through the 2005 reboot, Davies gave us “Dalek”, a series-defining episode that is still looked at as a masterclass. The reason he saved “Dalek” till midway through the run was in case reception was poor; then they would have a second chance at relaunching the show. Of course, it wasn’t necessary, but you can see the logic. A killer episode midway through just to reignite what had gone before is genius, and it’s something this run desperately needs.

There has to be a defining episode along the lines of “Dalek”, “Blink”, or “Midnight” to shock this current run into life, and it needs to happen before the season finale or the horse might have bolted.

Oh, and if it’s of any interest, I have a funny feeling that the final episode in this run might see The Doctor returning to tie up all the horrible loose ends left at the end of previous stories. I imagine her freeing the victims of Tim Shaw from episode 1, sorting out Art Malik from episode 2, looking for displaced time villain from episode 3 and sorting out Trump wannabe from episode 4. I also wouldn’t be surprised if she saves Grace, too. Just a thought.