Though an improvement from the previous episode, “Fire and Reign” stumbles through another flashback episode trying to find its footing.

Though an improvement from the previous episode, “Fire and Reign” stumbles through another flashback episode trying to find its footing.

This recap of American Horror Story Season 8, Episode 9, “Fire and Reign”, contains spoilers. You can check out our thoughts on the previous episode by clicking these words.

Kurt Vonnegut advised writers to start as close to the end of the story as they could. Ryan Murphy must have missed that tip, because we’re still in the Land of Flashback Exposition. For like the fifth episode in a row. “Fire and Reign” begins at bowl haircut central with the demon-loving, coke snorting geek duo, Jeff and Mutt (Evan Peters and Billy Eichner) complaining about the lack of initiative from the Anti-Christ. Same, guys. And Ms. Venable is not amused by their HR violation workplace attitude.

Thankfully we’re back at Coven house where Cordelia and company are beginning to take measures to protect the girls. Dinah turns up on their front porch up to a big batch of no good with her partners Michael and Robot Miriam. A few chants and she breaks the charms that protect the house. Without flinching, Miriam opens fire with a convenient gun arm, killing most of the young witches, as well as Queenie and Zoe (RIP, again). They miss Cordelia, Mallory, Madison, Coco, and Myrtle, but before Michael gives up his “Kill all the witches” quest, he gets a good talking to from Miriam, who just happens to be controlled by Jeff and Mutt. It might be best that they help out since Michael is lifting world-ending ideas from The Omen 3.

Their game involves the Cooperative, which they say is the code name for the Illuminati. The pair unveils their plan, an explanation of how the Apocalypse from Episode One came about. Essentially, our Jeff and Mutt convinced Michael to inspire all those power-hungry, sold-my-soul folks to set off some nasty weapons. He’s into it not because he particularly cares about ending the world, but because of the previously mentioned “Kill all the witches” thing. The reveal is somewhat of a letdown. Really? That’s it? This whole thing was planned by two guys who call each other “Bro” and want escorts as their in-flight help? On second thought, that sounds about right. As you were, “Fire and Reign.”

Back in the Coven, Cordelia breaks down because she can’t resurrect her girls. Madison conveniently reveals that Michael can erase souls, something Cordelia apparently wanted on that original Murder House intel report. In an attempt to bring the girls back, Myrtle persuades Mallory to travel into the past to rescue Anastasia Romanov, the lost Russian princess who was also a witch, I guess because we needed a flashback within a flashback. Or a dry run of powers for Mallory. You know, whichever. Normally, I would be way into this Quantum Leap business, but somehow it just seems like one more thing to track this episode. This leap is unsuccessful, although it does show that Mallory can pierce the veil. Of course, if she can travel through time, why not stop Vivian Harmon from moving into Murder House? That seems like a better plan. 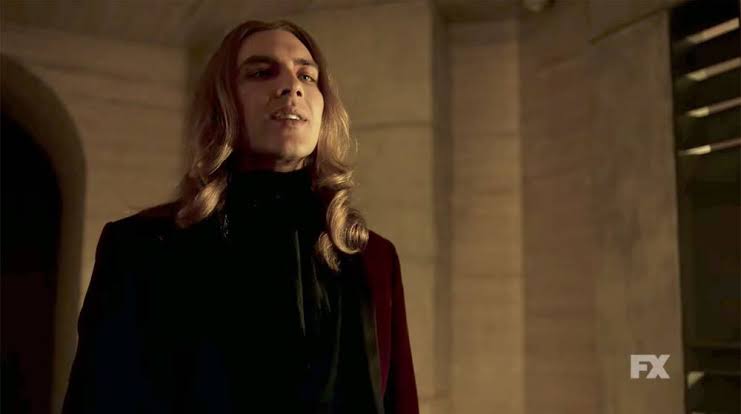 What follows is perhaps one of the best scenes of the last few episodes where Cordelia and Myrtle discuss how to save the Coven. The fading Supreme reflects on her own mother. It’s a nice scene because it isn’t trying to be too clever or cram in too many random things.  By allowing Paulson and Conroy to breathe within the characters, it lends the episode gravity. Cordelia decides it is time for her to sacrifice herself to allow Mallory to ascend as Supreme. Myrtle isn’t quite ready to let her go, so they return to the warlock school for help. Unfortunately, Michael has run out of use for his previous colleagues and has left their bodies, and body parts, in a demonic symbol. RIP Behold. I think I’ll miss you most of all.

Back at Cooperative central, Ms. Venable is attempting to resign but her employers argue it is a moot point since the world is coming to a cataclysmic end. Rather than have her resign, they convince her to take over control of an outpost. At “Sold My Soul to Satan Club Med,” Michael is calling in favours for the powerful, asking their contribution to designer fallout shelters. “Fire and Reign” ends with Michael bringing his business proposal of outpost construction to these movers and shakers, who for some reason, hopefully other than aesthetic, wear reflective masks. The scene has a decidedly Star Wars battle cruiser vibe.

I’m torn about this episode. It’s certainly an improvement from last week, yet it still feels like too many commercial breaks, too many rabbit trails, not enough meat. As is often the case, the season depends on the finale, the big payoff. Murphy and cast certainly have the talent to bring it all together. I’m going to bet pretty high (although not my soul), that they will.