The latest episode of the Amazon Prime Original Series The Romanoffs begins with a chance meeting between journalist Abel and descendant of the Russian royal family Victoria. Nothing of note really ensues.

The latest episode of the Amazon Prime Original Series The Romanoffs begins with a chance meeting between journalist Abel and descendant of the Russian royal family Victoria. Nothing of note really ensues.

This recap of The Romanoffs Episode 6, “Panorama”, contains spoilers. You can check out our thoughts on the previous episode by clicking these words.

Either I’ve got really bad luck when it comes to The Romanoffs or I just don’t get it. When others on Ready Steady Cut have picked up the slack for me they’ve said how great that particular episode was, but when I watch it, I hate every second of it. I keep meaning to go back and catch up on the episodes I’ve missed to prove this once and for all, but quite frankly I don’t want to.

This week undercover reporter Abel (Juan Pablo Castaneda) is trying to get the inside scoop on a miracle clinic in Mexico that can supposedly save people from all sorts of incurable diseases. One of the problems is that Abel is perhaps the most inept reporter on the face of the planet and struggles to pull off pretending to be a person, so any undercover work is a real stretch. While he’s at the clinic he meets Victoria (Radha Mitchell) and her poorly, poorly son Nick (Paul Luke Bonenfant) who has haemophilia. Hold on… Nick as in short for Nikolai AND haemophilia? I think someone is trying to give us a subtle hint they might be the descendants of the famous Russian family in “Panorama”. With that out of the way the most exciting thing about the episode, playing “spot the Romanov”, concludes for another week.

I didn’t like Abel. He’s terrible at his job but at least this is actually acknowledged by everyone around him, including his boss. I could forgive him being the worst reporter in the world if he wasn’t such a total ding dong about everything else. “Panorama” opens with him idly flicking through Tinder (or other generic swipe-based dating app) while he gives a smouldering, brooding but tender and heartfelt voiceover. From that moment on I hated him. Then he’s in bed with some random woman off Tinder (or other generic swipe-based dating app), we get a quick shot of her writhing on top of him and then she’s off, never to be seen again. I assumed the opening scene was to let us know that he is both a deep and sensitive soul but also a ladies man. The reality was I took against him quite early on. 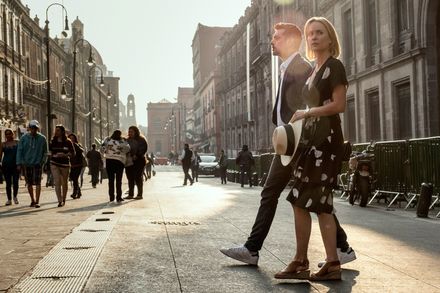 Then there’s some crap where he meets Victoria at the clinic and pretends to be ill for a bit because of his story. Abel, Victoria, Nick and her driver have a lovely jaunt around the historic sites of Mexico City where they can ramble about faux spiritualist nonsense. Apparently, the two of them fell in love or something on the day trips out with her incredibly ill son (and their driver). I wasn’t really sure how that happened but I’ve seen more chemistry in a French exam.

Victoria isn’t really any better as a character but at least she has the excuse of being fairly underwritten. She’s got a husband that she’s separated from and of course a poorly son, but that’s pretty much all she is. Oh, she’s a Romanov as well, and Abel seems suitably awed by this shocking revelation. If their descendants are meant to have cool superpowers or something then creator Matthew Weiner is leaving it late in the day to pull that ace out of his hole.

Then at some point things just end. Abel and Victoria are sat on top of a big hill being very philosophical and I thought they were going to get together. It turns out they weren’t, after all that. Instead, the whole thing ends with Abel walking across a square where there appears to be some sort of parade going on? I think it was meant to be a metaphor for something but by this point, I’d stopped caring.

The one magical part of this show is its ability to warp time. I swear I had been watching for 2 hours, but when I checked the counter I was only 20 minutes in. There’s a point where Victoria is talking about how she needs to appreciate every moment with Nick, to not wish the time away. She wants to stretch every moment out to make it last so the minutes stretch into hours. The only problem was it seems like she’d cast her spell on my Amazon Prime app, and was making The Romanoffs last for months.