“The High Tower” was the most vocal episode of Star Wars Resistance thus far when it comes to the show’s obvious class commentary, but there wasn’t much to it beyond that.

“The High Tower” was the most vocal episode of Star Wars Resistance thus far when it comes to the show’s obvious class commentary, but there wasn’t much to it beyond that.

This recap of Star Wars Resistance Episode 5, “The High Tower”, contains spoilers. You can check out our thoughts on the previous episode by clicking these words. (Note: We haven’t missed an episode, the numbers are just mixed up thanks to various obnoxious reasons and unreliable sources.)

Since its debut, Star Wars Resistance has rather obviously been more interested in its setting than its protagonist. There’s nothing wrong with Kazuda Xiono (Christopher Sean) per se, but he’s too flat and one-dimensional for a hero; too shallow for drama and too inconsistent for a comedy device, his naïve blundering is mostly used to force an episode’s plot to happen around him. “The High Tower” felt particularly weak because it just didn’t have that much plot, even though it did a decent-enough job of fleshing out the show’s weird pocket of the galactic continuity.

Of particular interest is how the First Order are meddling with the commerce and politics aboard the Colossus, and to what extent Captain Doza (Jason Hightower) is aware of it. Neither element made much of an impact, but admittedly it took something of a back seat to a rather ham-fisted examination of how life for the upper-class Aces compares to life for the not-so-upper-class everyone else, mostly communicated by some obviously testy history between Tam (Suzie McGrath) and the Aces leader, Hype Fazon (Donald Faison). 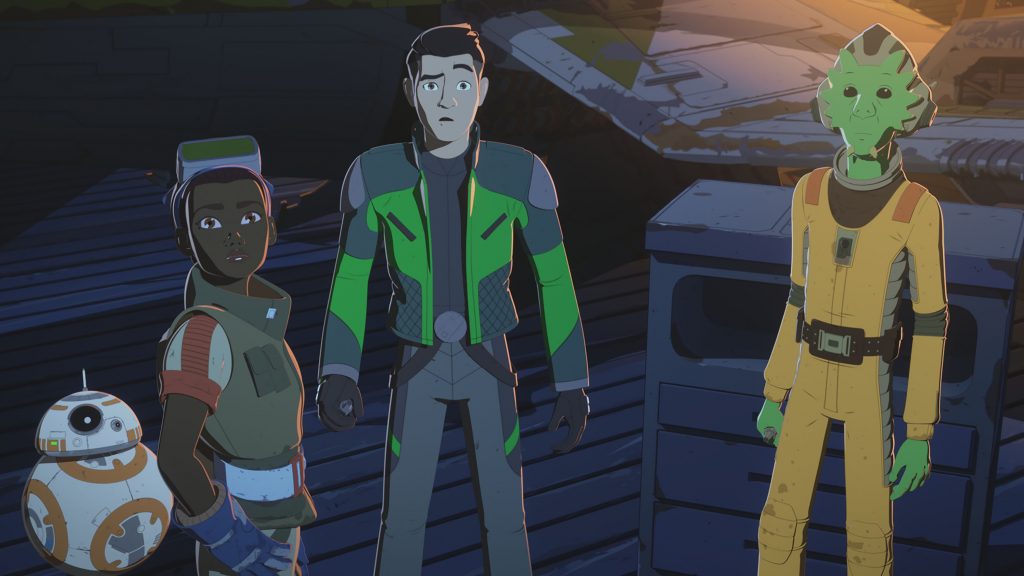 Both Doza and Fazon fall into the archetype of “obviously privileged but mostly well-meaning”, which is hardly fertile creative ground, but it works well enough when held up in direct opposition to the show’s regulars, particularly Tam. But most of the rich vs. poor points were made visually rather than in explicit dialogue, particularly during the visit to the high tower of the episode’s title, where the Aces reside in obvious luxury.

Star Wars Resistance isn’t bad, but it doesn’t seem to be making much of a case for itself. There’s obvious effort being made here to flesh out part of the timeline that has been relatively undernourished as far as the broader continuity is concerned, but there’s still a clear focus on the Colossus that leaves the cast feeling short-changed, and the nebulous machinations of the First Order are only being revealed slowly and relatively uninterestingly. “The High Tower” was fine, but thanks to the absurdly high standard set by Dave Filoni’s previous animated Star Wars shows, fine hardly seems like enough.

STAR WARS RESISTANCE IS PART OF THE CURRENT STAR WARS CANON. CHECK OUT THE TIMELINE.