A loud, outrageous and entirely silly movie, Night of the Trampires sees “the best goddam cop on the force”, Chuck Steel, take on an army of street-dwelling vampires. Steel is every hyper-masculine 80s action star combined and the film itself does not shy away from the absurdity of that genre.

A loud, outrageous and entirely silly movie, Night of the Trampires sees “the best goddam cop on the force”, Chuck Steel, take on an army of street-dwelling vampires. Steel is every hyper-masculine 80s action star combined and the film itself does not shy away from the absurdity of that genre.

The aggressively un-PC nature of Night of the Trampires takes some time to get used to at first, but once you’re in, you’ll be along for the completely insane ride. The film works as both a parody of and love letter to the excessively macho action movies with Steel himself (voiced by creator/director Mike Mort), embodying every cliche. It is this that makes the film so funny and so entertaining; its complete over-the-top insanity.

The film’s story is equally as absurd, with a bunch of high-profile disappearances being revealed to be the work of the “trampires”: a mutant hybrid of vampire and tramp. The film really shines when it’s more focussed on Steel and British “trampire hunter” Abraham Van Rental (also voiced by Mort) working to seek out and destroy the trampires before they take over Los Angeles.

Seeming like a stop-motion Evil Dead movie at times thanks to Night of the Trampires‘ full embracing of its gory, crazy, fun horror, as well as Chuck Steel’s similarities with the character of Ash Williams, despite him having the hair of Johnny Bravo. Steel even gives “the chin” Bruce Campbell himself a run for his money in that department with his hilariously defined jawline. 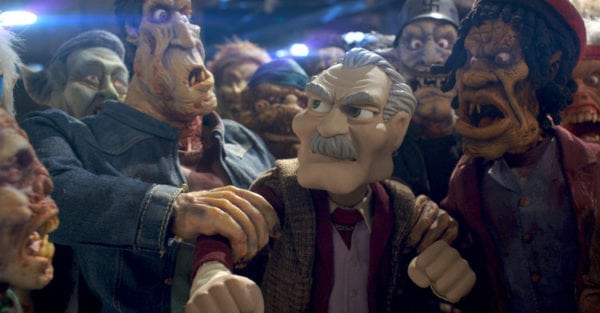 Its silly horror definitely makes for the most engaging scenes, but that is not to discredit scenes surrounding the police force. Jennifer Saunders voicing the police department psychiatrist who has seemed to bring out the inner emotions of every member of the force to an absurd degree is a particular highlight. As is police captain Jack Schitt (yet again voiced by Mort), whose back and forth with Steel make for some of the funniest lines in the film.

Night of the Trampires was first written all the way back in 2001 and it’s instantly clear the level of dedication that Mike Mort has put into this project. The stop-motion animation is flawless which is all the more impressive when you consider this is a very fast-paced action movie as well as one that has many scenes of very effective gore. While some of the humour doesn’t quite land and is certainly not for everyone due to its outrageously un-PC nature, there is more than enough parody comedy in here to entirely entertain.

The hugely impressive animation, complete embracing of its own style and simple ability to put a smile on the face makes Night of the Trampires well worth keeping an eye on. HARRYHAUSEN!!