Funan is a heartbreaking yet hopeful story of family forced into exile during the Cambodian Khmer Rouge communist revolution in the 1970s. Hard hitting and often violent, the film will leave a lasting impression and acts as a very necessary look at the brutality of this regime.

Funan is a heartbreaking yet hopeful story of family forced into exile during the Cambodian Khmer Rouge communist revolution in the 1970s. Hard hitting and often violent, the film will leave a lasting impression and acts as a very necessary look at the brutality of this regime.


Funan is certainly very powerful in what it has to say, despite it not being particularly enjoyable viewing. However, enjoyment is not the objective of this film. It was made to emotionally affect those who watch it and make us aware of the horrors of the Khmer Rouge and it is entirely successful at doing that.

Funan is the winner of this year’s Feature Film Cristal at Annecy Animation Festival and it is not difficult to see why it is so well regarded. The animation style itself feels very South East Asian despite this being a French Production spoken in French. It is beautiful when the film calls for it to be and feels just as smooth as the film’s pace. During the more horrifying scenes, the animation feels just as horrifying in its realism, leading to you sometimes forgetting it is not actually live action.

The heart of the film comes in the form of Chou (Berenice Bejo – The Artist), a mother who loses her three-year-old son during the exile and fights to survive only for the chance of finding her son again. The rest of her family, including her husband, all go through their own personal hardships as victims of this revolution. Forced into slave work, they are split up at a moments notice, but there is always this sense of dedication to finding each other again that leads to some very emotional moments indeed. 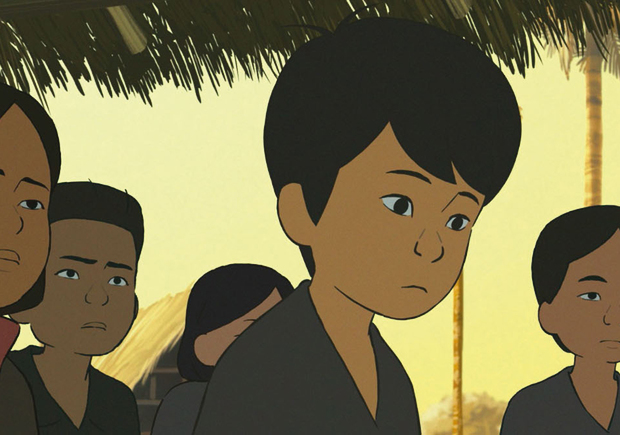 The care taken in looking at the will to survive in such horrific circumstances is Funan‘s greatest strength. A film that is so quietly and subtly intense, deliberately paced and downright grim for the majority, it had to hit successfully in what it was trying to say for it to not come off like 85 minutes of sadness for the sake of sadness. Fortunately, it is very successful.

While at times a little odd to hear South East Asian people speaking French, it is easy to look past this element and realise the true importance of this film. An incredible amount of passion to tell this story is clear to be seen from the first minute and with the realistic nature of the animation working perfectly in tandem with the brutal realism of the story, it can only be said that Funan is an excellent film.

Harrowing, hard-hitting, heartbreaking and hopeful; this is a film that should be immensely respected.