The Princess Switch is a pleasant but dull entry into the Christmas royalty subgenre that does exactly what it needs to do and not an ounce more.

The Princess Switch is a pleasant but dull entry into the Christmas royalty subgenre that does exactly what it needs to do and not an ounce more.

By this point, a very precise formula has been developed for the bizarrely specific subgenre of cheesy Christmas royalty films. The woman is a humble, girl-next-door type, a chef or artist or writer or Professional New Yorker who is clumsy and for some reason really struggles with curtseying even though it’s not that hard, you guys. The man is a prince (or MAYBE king): he’ll either be a charming playboy with a heart of gold or a reserved stick-in-the-mud waiting for the right girl to teach him how to have fun, but there’s always a crown somewhere in the picture. The Princess Switch, for better or worse, sticks to all the established conventions of the genre, its only twist in its development of a Parent Trap-esque identical strangers situation.

Stacy (Vanessa Hudgens) is a Type-A baker from Chicago who has to plan out every moment of her life, until her very cute single dad business partner Kevin decides that she needs to be more spontaneous and enters her into a prestigious international baking competition. This will all be taking place in the made-up country of Belgravia, which is presumably nestled between Genovia and Aldovia. The filmmakers, by the way, do not go to any effort to make Belgravia look even remotely European, which is not a problem necessarily, just a frustrating observation it’s almost impossible to avoid making throughout the film.

Margaret (also Hudgens) is a beautiful duchess who is engaged to marry Prince Edward of Belgravia, despite only having met him twice and actually finding him rather boring. Not the greatest start to a relationship, to be totally honest, but there is a negative twelve percent chance that these two platonic-friend birds end up together at the end of the movie so it’ll probably all work out in the end.

When the two Hudgens meet, it’s Margaret’s idea to temporarily switch places — she wants to learn what it’s like to be a normal girl (side issue: the way that Vanessa Hudgens with an accent pronounces the word “girl” is intensely off-putting), and Stacy is convinced to go along with the scheme when Margaret agrees to bankroll her friend’s daughter’s entry into a prestigious Belgravian ballet summer program (a fictional country known for their elite dance academies, apparently). From here, you can probably guess how this all shakes out — nobody needs training wheels to figure out the plot of The Princess Switch. 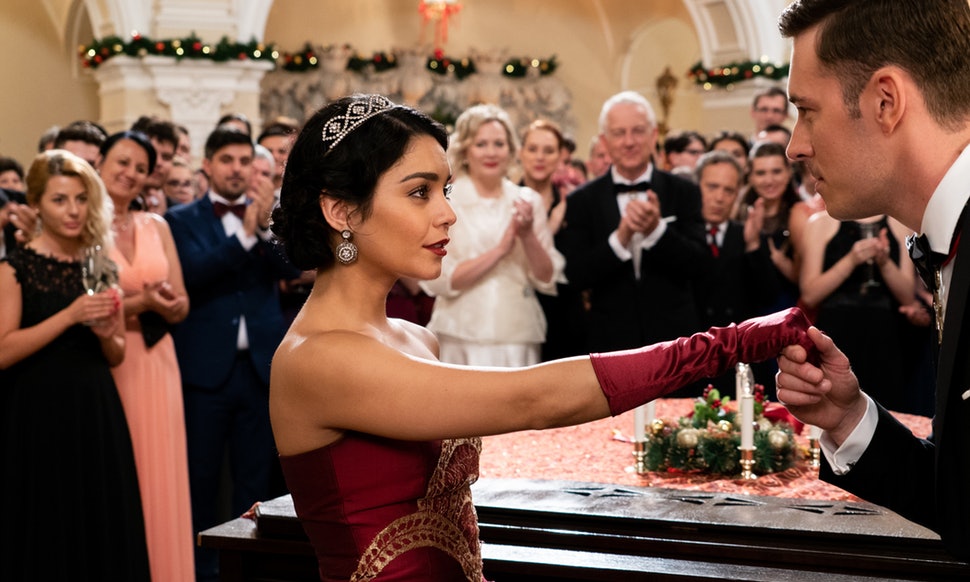 No, this movie doesn’t bring many surprises, but that isn’t really the point of it. If The Princess Switch is what you’ve chosen to watch, it means that you’re not in the mood to be intellectually challenged; you want the narrative equivalent of a mug of hot cocoa and a warm blanket. In that regard, The Princess Switch mostly does its job. The lead performances are perfectly serviceable, although they lack the chemistry that defines some of the best this quirky little subgenre has to offer. Bizarrely, Vanessa Hudgens is much stronger with the affected accent than she is while trying to do her best impression of a normal woman (for some reason, portraying an actual human person always feels like something she struggles to master in her films). Sam Palladio and Nick Sagar (Edward and Kevin, respectively) are both appropriately dreamy in their own ways, although it would have been nice for either or both of them to have been developed a little better.

The only thing left to discuss about The Princess Switch is the elephant in the room, the character that mystified audiences throughout with his very presence: the Mysterious Magical Spirit of Christmas Man. This is a guy who bafflingly showed up constantly throughout the film, nudging people in the direction they were already headed and likely had no need of outside guidance to do so. There is no point in the film where he serves any real narrative purpose. Honestly, after the first 45 minutes you begin to wonder if he even exists at all or you’ve invented him yourself to shake things up a bit because, in spite of the incredible fact that this film includes within it a scene where the characters sit down and watch A Christmas Prince together, you’re starting to find the whole proceedings a little dull.

None of that matters, though. Movies like The Princess Switch are essentially quality-proof. And for that reason, although it does occasionally struggle to clear the low bar it has set for itself, the movie is pleasant enough to watch when the temperatures fall below freezing and Christmas cheer begins to infect your soul.