With their careful plot construction and acerbic wit still intact for Inside Llewyn Davis, the Coen Brothers make our instincts work against our souls and move our minds to new understanding.

With their careful plot construction and acerbic wit still intact for Inside Llewyn Davis, the Coen Brothers make our instincts work against our souls and move our minds to new understanding.

Do you have a heart? A mind? Do you happen to have a soul? If so, boy do the Coen Brothers have a film for you that will have the three of these, your precious parts, working in hauntingly asynchronous ways.

Meet Llewyn Davis. Llewyn is an itinerant artist of Greenwich Village, a singer of songs rhapsodizing folk, hoping to someday make it big. By itinerant, of course, it is meant that Llewyn lives nowhere in particular and from apartment-to-apartment specifically, apartments never his own, bumming a couch or a small spot on the floor for the night so that the next day he may go on to do the same. Sometimes for Llewyn there is a performance in between. Llewyn is thankful when there is money involved, but the payment of money is a rarity these days owing to either the pitiable incompetence of or flagrant thieving by his evasive, irascible, octogenarian manager. Such is Llewyn Davis’ career, though Llewyn has a most serious problem: Llewyn Davis is slowly becoming Murphy’s Law incarnate.

That last fact lands mostly into the lap of the Coens.

Along with these obvious problems for Llewyn career-wise, the Coens have deemed it necessary that we see, in these two or three days put onto the screen, a plot whereby troubles layer onto troubles at carefully modulated intervals, the first of which can be called the cat debacle. We see this problem arise just after the film’s wonderfully enveloping, phantasmagorical first scene. As Llewyn is leaving the apartment of a professor to whom he is something of a musical pet, the cat slips out. Normally, this would be no problem at all, but the door has locked and Llewyn doesn’t have a key. What is a man to do? He tries to leave the cat with the neighbours but there is no answer. He wants to leave the cat with the lift attendant, who, in a snide bit of riposte, refuses. Llewyn is left taking the cat to the next apartment on his apartment-hopping tour, where later in the day the cat jumps out a window Llewyn recently opened. The cat is seen again while Llewyn is having a surreptitiously-arranged meeting at a local curbside coffee house. Llewyn, pleased with his fortune, takes the cat to the professor and the professor’s wife when he gets the call from the professor to return the cat home. Llewyn upsets the wife, and it is discovered that the cat brought to the apartment is not even the right cat, not even of the right gender. We learn in the end that the cat made its own way home and that it shares a name, aptly enough, with the mythical adventurer Ulysses. The gods surely have more concern for the feline Ulysses than they have for the tragically human Llewyn Davis. 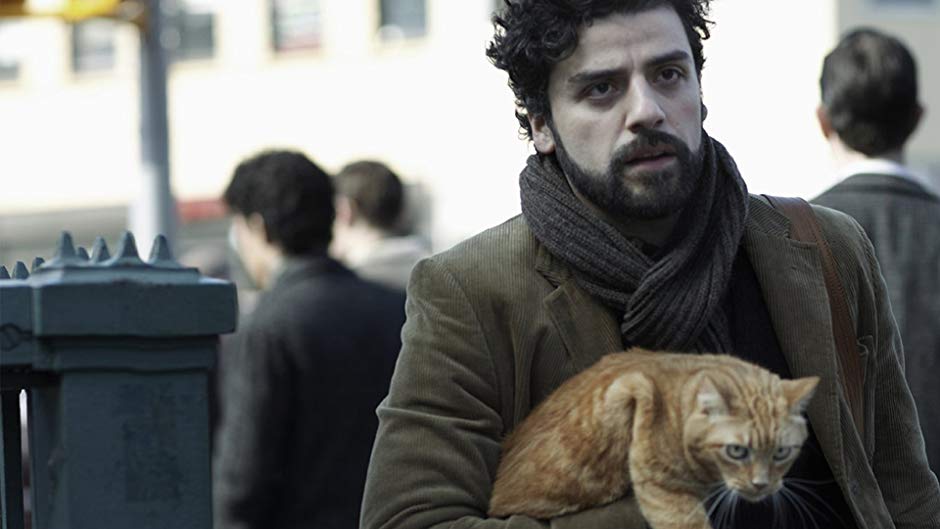 The second is Llewyn’s incipient elevation to fatherhood. One of the apartments to which Llewyn is a frequent migrant is that of a singing husband-and-wife duo. Unfortunately, they seem nice people, having little problem doubling as Llewyn’s best friends. More unfortunate is that the wife is pregnant and she can’t be sure if it’s her husband’s baby or Llewyn’s. So as would be expected during the early ’60s, the time-frame in which the film is set, the wife curses Llewyn and is hard on herself, all the while talking to him about the inconveniences of an abortion. As would not be expected at any point in time is that Llewyn asks the husband for money to get the abortion, pretending it is for some girl he’s known to have had the procedure before, certainly not mentioning the wife except to tell the husband to say nothing to her. That path of procuring the money is a no-go but another comes forward and a date is about to be arranged, when, intending to pay the doctor, the doctor tells Llewyn that payment is unnecessary because the last abortion was not done. Suddenly, Llewyn is the father of a two-year-old he has never seen, causing him to try to work through what actual significance going through with the abortion in the current situation would have for the efficacy of his life. It seems the universe is playing a cruel game of paternity wack-a-mole with Llewyn. “If it ain’t one problem, it’s another.”

The third is Llewyn’s attempted escape from the vicious cycle of life in Greenwich Village. To leave the surreal tedium that turns into the malaise that is the music scene for Llewyn in Greenwich Village, Llewyn does pursue a few opportunities that arise intermittently, but he is always met with a resounding no. Because of his connection to the professor and to the husband-and-wife duo, he gets an opportunity to collaborate on a song that he is told is sure to be a successful hit. There will be no royalties, however, because he is still with his octogenarian manager and so can only work as an independent contractor. Llewyn then accepts an offer to help pay for gas on a trip another artist is taking to Chicago. That trip also has its sore points. One is that one of his fellow passengers talks too little while the other talks too much, berating him, insulting his sensibilities as an artist. Another sore point is that, once he gets to Chicago, having had to hitchhike, he learns that his manager had never sent out his album as he was told and so the record label director in Chicago doesn’t know him. Llewyn soldiers on and gives a live performance that seems to captivate the record label manager. It doesn’t, and when he is told that he should get back with his partner, Llewyn says in response, “That is good advice,” affirming to himself that there might only be the one fatal way out. But before he does, before he joins his former singing partner in a watery grave off the George Washington Bridge, Llewyn tries to reenter the merchant marine, but even here there are so many unforeseen obstacles that the whole four-to-five-hour attempt ultimately comes to nothing. 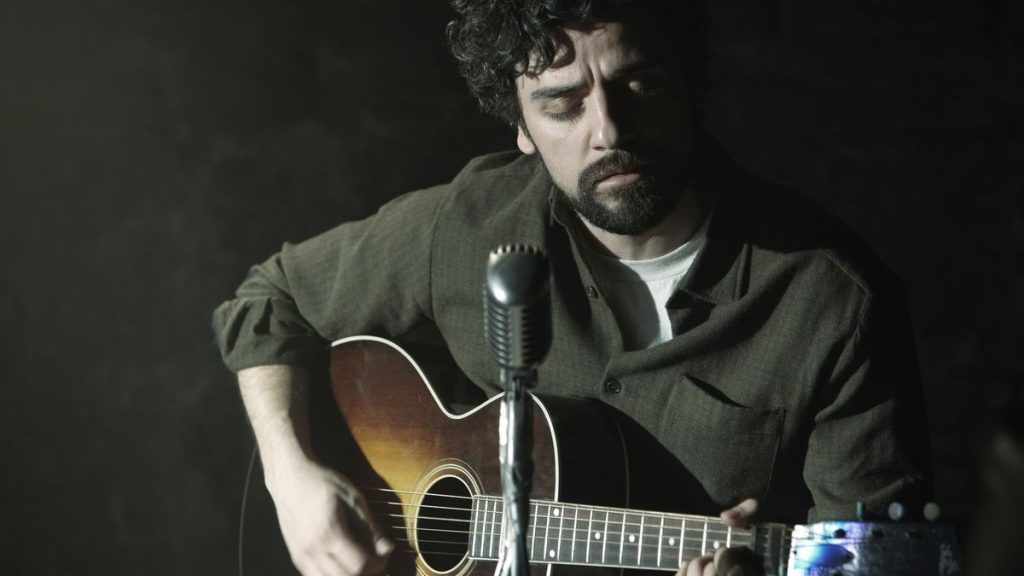 All of this in spite of his intelligence, his sensitivity, his charisma, his desperate desire to give his all to the world. So why must Llewyn suffer so? Why does the world take the very best of him and yet gives so little good back to him in return? Oh, tell us you perfidious brothers! Oh, tell us: Why?

The rest has to do with the irrevocable laws of nature. Embedded in each of us is a view of the world and a belief that the world could be made better, could be made sensible, could be made beautiful if everyone else understood our vision and worked in accordance with our strictures to bring that vision to fruition — at least this is the case near the start of our lives. Somewhere along the way, we learn that not everyone is envisioning the same thing nor are they able to intuitively know our vision, in which case the communication of the vision must be commensurate to the ability of others and not merely the ability of ourselves. This evolution never occurred for Llewyn, and it is his strength that he has retained his vision for the world, though it is his weakness that he has been unable to develop a language to communicate it with others. Llewyn sees himself as a bard singing back to the universe, not someone singing to an audience of people who want to experience what he feels. Any alignment with Llewyn that an audience achieves would be completely incidental. He is the ever-young male ingenue — the pure poet, unrefined. The Coen Brothers do not have this problem of vision, however. Because they know what makes us laugh and makes us cry, and know what each moment in a film would elicit in its turn, they are able to deliver to us many stories such as the masterfully composed Inside Llewyn Davis.