A huge improvement on the first Unfriended, Dark Web has worldbuilding that deserves more attention.

A huge improvement on the first Unfriended, Dark Web has worldbuilding that deserves more attention.


Unfriended: Dark Web is from director Stephen Susco and is his directorial debut after spending the last couple of years working on horror screenplays such as Texas Chainsaw 3D and The Grudge. Unfriended: Dark Web stars, Colin Woodell (Unsane) and Betty Gabriel (Get Out).

Unfriended: Dark Web starts by following Matias (Woodell), who has found a laptop and wants to use it to help build an app that will help communication between deaf people, which includes his girlfriend Amaya (Nogueras). When the owner of the laptop discovers Matias has the laptop, he wants it back and will do anything to make sure he retrieves it.

The story in play here is a sequel and does go in a very different direction to the original’s ghost haunting bullies for revenge; namely, that of a Dark Web society that is making snuff movies who target this group of friends after they locate one of their laptops. Having the friends in different locations tries to play into the idea that they could be safe or at least only one could become the next target, though it does go through some over-the-top style kills when we start offing the characters. The biggest plus point in the story must come from the worldbuilding; once this film is over, you will be ready to see the next chapter for the Dark Web group and just how big they truly are. The biggest weakness of the story comes from the fact that we have two different endings which were randomly picked between the showings of the film. Another problem comes from the title; we don’t get into the haunting Facebook system, which is good, but in that case, it could have been just called Dark Web. 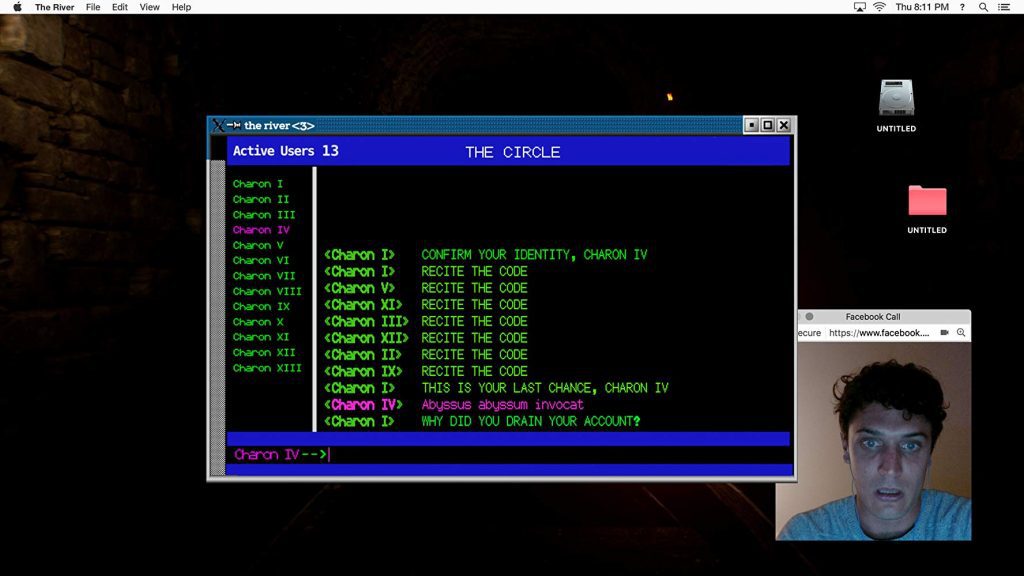 The horror elements in Unfriended: Dark Web take us into the world of the deep dark internet where a society has been creating snuff videos by kidnapping women. Taking away the paranormal side of the film helps because this puts us into the real world, which shows how people can be more twisted and disturbing than any spirit. Most of the kills or videos don’t show us the graphicness of the crimes, which is good because we don’t need a mad over-the-top bloody mix of deaths to get the point across.

The acting from the young adults is solid enough, we do believe they could all be friends which is a crucial part of the story, and they have good chemistry together even if some of the characters are painfully generic. The characters do include the tech expert, the cocky conspiracy nut, the music expert and a lesbian couple with big news. These are not going to be the most challenging roles to play and the only question you are left wondering is why would you Skype with your deaf girlfriend who lives on the other side of town; surely texting would be enough. If you don’t live together in the same town, the relationship probably hasn’t reached the truly serious moment yet.

Overall this does feel like a standalone movie. It doesn’t need to be branded with the Unfriended title because it is completely different in story; only the style of being on webcams is the same. It does create a world which has massive potential for the horror community to enjoy, and feels like a massive improvement on the first film.